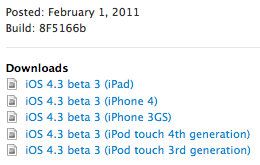 Just about 2 weeks after releasing iOS 4.3 beta 2, Apple dropped iOS 4.3 beta 3 today to developers. This pre-release version of iOS 4.3 is for iPhone 4 and iPhone 3GS, iPad, iPod Touch 3G and 4G, and the Apple TV.

Of course, you have to be a developer to be able to download iOS 4.3 beta 3 from Apple’s website. At this point, we don’t know if any major new feature was added to this beta release, but we shall find out soon.