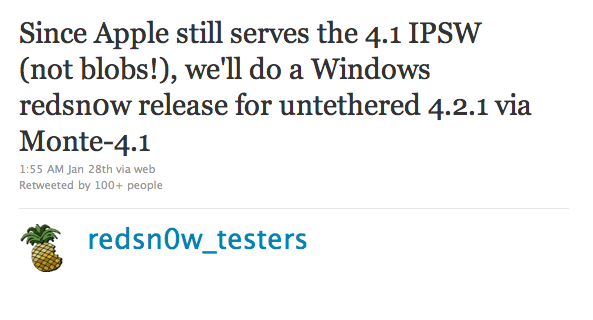 Windows users, your long wait for an untethered jailbreak for 4.2.1 via Jailbreak Monte is almost over!

Yesterday, via twitter the iPhone Dev Team confirmed that since Apple is still allowing download of the 4.1 IPSW (not blobs) they will at last release a Windows version of RedSn0w 0.9.7 beta…

The Windows version will provide an untethered jailbreak on iOS 4.2.1 via Monte 4.1. This means that you must have saved SHSH blobs for iOS 4.1.

Additionally, the iPhone Dev Team states that the Windows version will be noticeably slower than the Mac version as it uses file systems instead of RAM.

I don’t think that will matter to Windows users (including myself) as we have been patiently waiting since December for this!