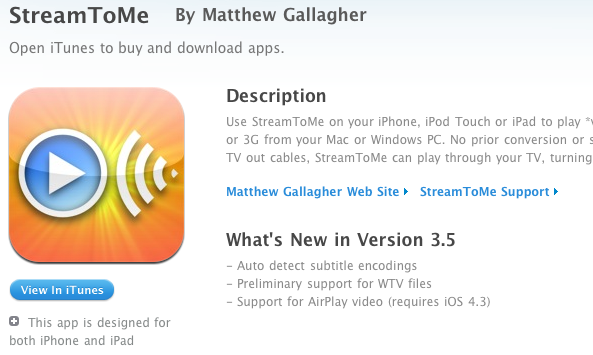 Matt Gallagher — the creator of StreamToMe — is always on top of his game when it comes to app updates. Thus, the reason for StreamToMe’s iOS 4.3-compatible App Store update could all be owed to his proactive nature.

Or it could be that iOS 4.3 is really just that close to an official deployment and release.

Why is this good news? Not only will it allow 3rd party apps to utilize AirPlay, which is awesome, it also provides promise for those waiting for an iPhone 4 unlock…

As we previously reported, Dev Team member MuscleNerd says that an unlock will come after the release of iOS 4.3. Well if StreamToMe’s update is any indication, that release might not be far away at all.

So, for those of you clamoring for an unlock, sitting on pins and needles, your wait may be getting shorter.

Are you still patiently waiting for an unlock?