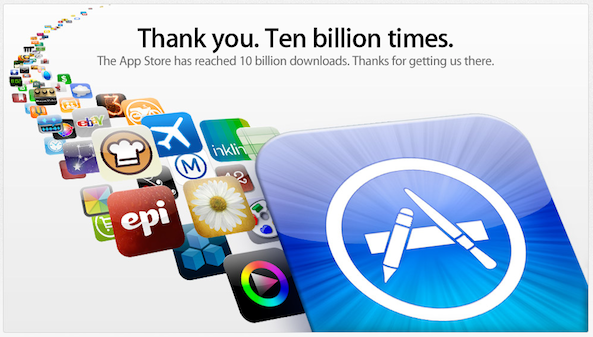 Well, it’s official. The Apple App Store has hit yet another milestone in record time, with over 10 billion downloads to its name. That’s truly an amazing feat for a merchandising method that didn’t exist just a few years ago.

As we reminded you in a previous article leading up to this event, the App Store hit the 1 Billionth download a little less than 2 years ago. It’s crazy to think that since April 2009, the App Store has served up over 9 billion downloads, but it has…

In fact, the store is such a monumental and runaway success, that everyone is copying it. And by everyone, we mean everyone — Microsoft, RIM, Google, your grandma – everyone.

Apple, realizing how game changing its App Store was to the iPhone and the iPad, ushered in the Mac App Store at the beginning of the 2011. This store works in the same vein as the mobile App Store, except it’s for your desktop.

It too, recently reached a milestone, garnering over 1 million downloads on the first day of its launch.

That brings us with the obvious question. Just what is it that makes the App Store so popular with consumers? What’s in Apple’s secret sauce?

Well, it’s a combination of quite a few factors, but the most basic factors are ease of accessibility, the lack of a formal install process, the modest prices of the paid apps, and of course, great software.

Combine all of that with Apple’s sleek hardware, and you have a sure-fire-hit on your hands. At this point, anything else looks like sheer silliness when compared to the width, and depth of the App Store experience.

What are your thoughts on the App Store’s runaway success?