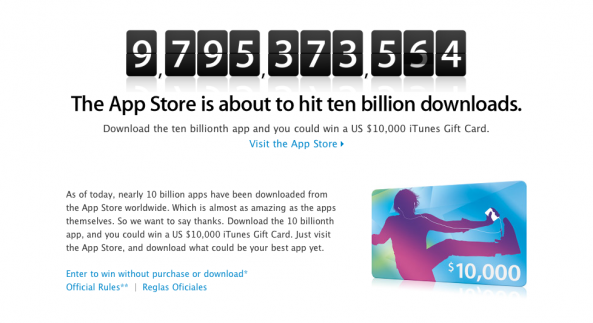 Apple’s App Store has had unprecedented success since its release in July of 2008. 2011 marks the App Store’s 3rd birthday, and it looks like Apple will celebrate by hitting 10,000,000,000 downloads. The App Store has averaged over 3 billion downloads per year since 2008. As a comparison, it took iTunes 8 years to reach that same level of success.

In fact, just last year, iTunes celebrated in the same fashion with its own 10 billion downloads countdown. The lucky person that downloaded the 10 billionth song received a $10,000 iTunes gift card.

The one billionth App Store app was downloaded in April of 2009, which shows exponential growth for Apple’s platform. As the numbers approach 10 billion, another iTunes user will be lucky enough to receive a $10,000 iTunes gift card…

Apple’s countdown page displays a live, running tally of the apps that have been downloaded from the App Store. You can sit and watch as hundreds of apps are downloaded each second.

To be entered in the contest for the $10,000 iTunes gift card, you must fill out this entry form. If you download the 10 billionth app, you’ll be the winner. While the odds of winning are probably as good as winning the lottery, it’s still free to enter and worth a shot.

It’s unclear as to whether Apple is including duplicate downloads, updates, or free and paid apps in this countdown, but still, the numbers are staggering.

When you sit back and think about the success of the App Store, it can be easy to start feeling nostalgic. Do you remember the first app you ever downloaded from the App Store?