There are some many wonderful jailbreak apps and tweaks that I use on a daily basis, that I truly feel lost when I’m stuck with a stock iPhone.

Being without apps like SBSettings, BiteSMS, and ActionMenu truly makes using the iPhone less of an experience. In fact, I’d much rather be stuck with less Apple features if that means I can stay jailbroken, hence I always wait until there’s a jailbreak solution prior to upgrading my firmware.

Oddly enough though, there is one significant jailbreak app that hasn’t truly been attempted, and if it has, I surely haven’t been aware of it. Why we don’t have an app like this, is still anyone’s guess, but it’s safe to say that it would change the way we communicate via our iPhones…

The app that I’m looking for isn’t anything fancy, and it isn’t anything we’ve yet to see in the world of computers. In fact, every desktop and laptop computer that we use today, has this simple, yet necessary feature.

The app I’m referring to is this:

What I have in mind is something like this; an app with a layout similar to 3G Unrestrictor or Backgrounder, where you can select from your entire list of installed apps. The apps you select would thus be started automatically anytime your reboot or respring your iPhone. 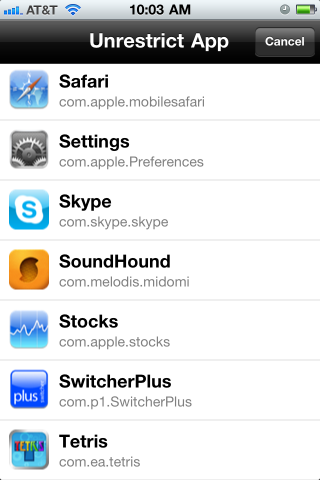 Sounds familiar, doesn’t it? As I stated, the same thing happens today when you reboot your laptop or desktop pc, so why not the iPhone?

Why We Need It

Well, we’ve gone this long without a startup app, so I guess we don’t need it, but it would make our lives a whole lot easier. In fact, I think that it could change the way we communicate forever, because it would ensure that we’re always available over an unlimited range of social apps.

For instance, take Skype for example. Skype just recently updated their iPhone app to support video chat over 3G and Wifi, and it works great. The only problem with Skype is that if you reboot or respring, and you forget to launch the app again, guess what? You’re offline, and no one can contact you.

This doesn’t bode well for totally changing the way we communicate. There should be an option to auto start Skype, and other social apps that keep us connected to our friends and family.

Why A Jailbreak App is the Solution

It’s obvious that the jailbreak community is likely our only hope for bringing on this needed change, because I just don’t see Apple budging on this subject, and I doubt they ever will.

The talking heads at Cupertino would reactively bring up the subject of battery life, but that’s not the issue here; the issue is using our iPhones in the way that we want to use them.

For that reason, the jailbreak community’s wonderful development circle is what’s needed in order to bring forth such an awesome app. I’d happily pay $10 for such an app, and I’m sure countless others would be enthused to pony up the same.

What You Can Do

If you feel as strongly as I do about this subject, then keep talking, don’t let it die. Let’s make it apparent that this is something we need. You can do that by commenting below, tweeting it, posting in forums, etc.

Would you like to see The Startup App make it to the iPhone? Let us know!