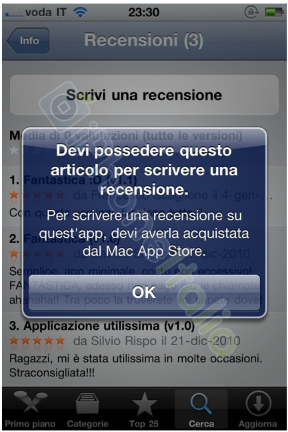 Here’s a new anomaly from Apple’s App Store. This image is courtesy of Francis, an iPhoneItalia reader. Francis was casually looking through the reviews of an iPhone app called “iAddebito.” He tried to post his own review, but was alerted with this warning message.

If your Italian is a little rusty, we understand. The message reads, “You must own this product to write a review. To write a review on this app, you must have bought it from the Mac App Store.”

The Mac App Store is opening tomorrow, but it seems that Apple may have already been secretly testing it with certain iOS apps. Who knows, perhaps there will be iOS apps that can run cross-platform (iOS and OS X) when the Mac App Store opens…

Whatever the meaning of this rogue popup message, it is clear that Apple will be pushing to unify the app experience on all of its platforms. 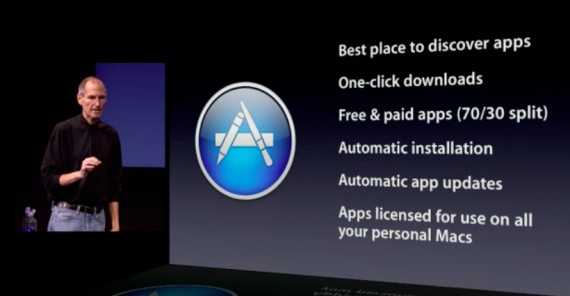 The Mac App Store is opening tomorrow at 12:00 P.M. ET. According to The Loop’s sources, “The Mac App Store will be available at 12:00 pm (noon) ET on Thursday. That puts it at about 9:00 am PT where Apple is headquartered in Cupertino, California.”

The Mac App Store is going to be huge for app development and distribution. Some big names are set to launch with the store tomorrow afternoon. Razorianfly recently broke an exclusive saying that the highly-anticipated “Tweetie 2 for Mac” is scheduled to be released with the Mac App Store’s opening tomorrow. I can’t wait for that.

What do you think about the Mac App Store? Do you think it will succeed in unifying the desktop experience with iOS?