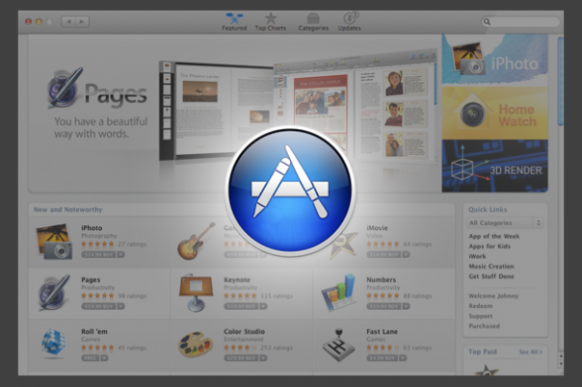 The official Apple press statement on the Mac App Store explains some basics about how the store will work,

“By bringing the revolutionary App Store experience to Mac OS® X, the Mac App Store makes discovering, installing and updating Mac apps easier than ever. The Mac App Store will be available in 90 countries at launch and will feature paid and free apps in categories like Education, Games, Graphics & Design, Lifestyle, Productivity and Utilities.

The Mac App Store lets you browse new and noteworthy apps, find out what’s hot, view staff favorites, search categories and read customer ratings and reviews. Like on iPhone®, iPod touch® and iPad™, you can purchase, download and install apps in just one click and start using them immediately.

Purchased apps can run on all of your personal Macs and updates are delivered directly through the Mac App Store so it’s easy to keep all of your apps up to date. The Mac App Store is available to Mac OS X Snow Leopard® users as a free download through Software Update.“

Some key things that the Mac App Store will lack from its iOS companion include in-app purchases and limited, trial (or “lite”) versions of apps. It is unclear as to whether Apple will implement these features down the road or not.

Apple hopes that the Mac App Store will parallel the experience of of the iOS App Store that we all know and love. Apple’s CEO, Steve Jobs, was quoted in Apple’s press statement,

“The App Store revolutionized mobile apps,” said Steve Jobs, Apple’s CEO. “We hope to do the same for PC apps with the Mac App Store by making finding and buying PC apps easy and fun. We can’t wait to get started on January 6.”

It’s obvious that the Mac App Store won’t have the same numbers as the iOS App Store. There just isn’t anywhere near the same install-base. However, that doesn’t mean that small, third-party developers won’t benefit greatly from having their content easily available to the masses in Apple’s Mac App Store.

What do you think? Are you excited about the Mac App Store? Especially if you’re a developer, we’d love to hear your thoughts.