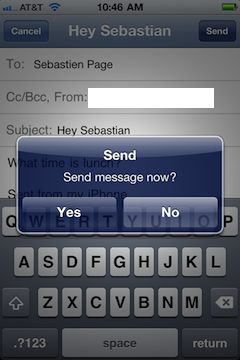 Wouldn’t it be nice if your mail and SMS apps asked you if you wanted to send, before sending? AskToSend is a jailbreak app that teaches your iPhone some lessons in etiquette…

AskToSend worked exactly how I expected it to work with the stock email and SMS apps. Its a great way to “think it over” before sending your messages out, and in my opinion should be a native iPhone option to begin with.

Included in the package is also an option to verify whether or not you want to add a subject to your email. Again this is something I feel that the iPhone should include out of the box. 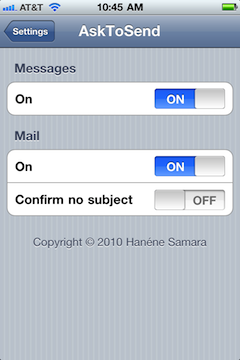 Interestingly enough, the tweak doesn’t work with BiteSMS, which ironically has its own built in “think it over” feature. I would imagine that this will be remedied in a future update, but perhaps the developers left it out intentionally since BiteSMS can do the same thing by its lonesome.

AskToSend can be downloaded via Cydia, and is available for jailbroken iPhones. I think that $.99 cents is a great price to pay for a jailbreak tweak that can save you so much potential grief, but what do you think?