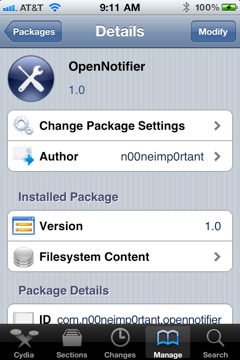 I think the majority of people are in agreement that one of the key features that the iPhone has lacked over the years, and continues to lack, is a competent notification system.

Sure we have push notifications, but those can be incredibly disrupting and intrusive. Then there’s the app icon badges, which serve their purpose, but can quickly litter your homescreen with a mess of little red icons.

What’s a guy to do to get some good notifications around these parts? Jailbreak, of course.

OpenNotifier is a customizable status bar notification system built from the ground up for iOS4. One of the key features that the developer touts is the fact that the app is customizable, courtesy of add-ons which can be downloaded from Cydia. 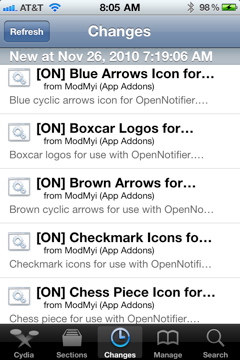 These add-ons consist of nothing more than status bar icons, but right off the bat there are quite a few of those to chose from. Perusing Cydia, you’ll find everything from ESPN icons, to Facebook icons, and Google Voice icons.

OpenNotifier works by recognizing when an app receives an alert, and pushes the user-assigned icon for that app to your status bar. For instance, I setup Google Voice with a specially designed Google Voice icon, and when I received a badge alert for a text message, the custom icon immediately appeared in my status bar. Nice. 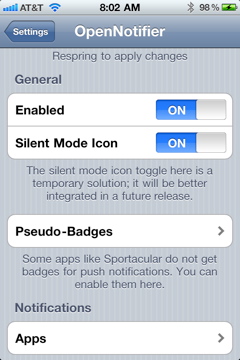 One nice feature about OpenNotifier is that it supports any app that receives push notifications, even if that app does not receive badges. In your settings.app, there is a provision for “pseudo-badges” to handle this scenario. I have to say that’s a pretty thoughtful feature for the developers to include.

As it stands, though, OpenNotifier has covered a lot of ground for a 1.0 release, and the developer promises many more features down the line. The best part about all of this is that if you’re jailbroken, the app is free on Cydia, along with all of the add-ons.

What are your thoughts on the iPhone’s lacking notification system? Is there anything you’re doing now jailbreak-wise to deal with the lack of an adequate system, or are you content with what Apple has given us? Let us know in the comments.