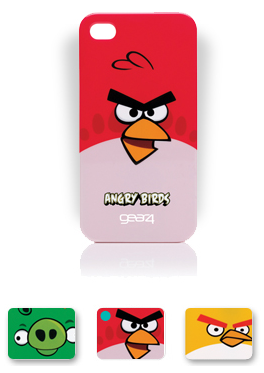 I don’t know about you but I’m a big fan of Angry Birds. I’m such a fan that I actually set up my SMS ringtone to make an Angry Bird sound every time I receive a new text message. Yep, that’s how I roll.

We’d already seen the Angry Birds plush toys before and it seems more goodies are being developed taking advantage of the momentum Angry Birds are having these days. The last product being developed is Angry Bird cases, which apparently will only be available in the UK via the 02 carrier…

There is no pricing information at the time being. Given the success of Angry Birds worldwide, I doubt these cases will only be available in the UK and they might very well come to the US sooner rather than later.

I don’t like cases, but I might change my mind if I could get my hands on one of those.

Is that something you’d buy?