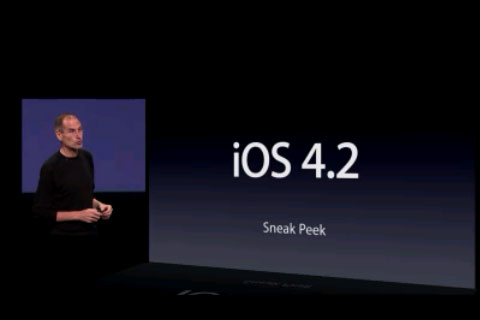 The folks over at TiPB have posted a nice and handy walk-through guide for iOS 4.2 features for iPhone, detailing all the new features expected in the latest iOS rollout, due this month (maybe as early as this week?)

While it’s not a major overhaul, there are several features iOS 4.2 is bringing that enhance the user experience – especially for iPad users. So which 4.2 features are you looking forward to getting the most on your iPhone?

Personally, I can’t wait to utilize AirPrint and also the new text message tones which can be assigned to individual contacts. One’s a major new feature, the other a desperately needed tweak.

Of course, I won’t be enjoying either feature until I know it’s safe to jailbreak 4.2, which shouldn’t be too much longer after the release. So let us know in the comments which feature you’re looking forward to the most! Or if there’s a feature you’re STILL waiting for, vent about that, too!