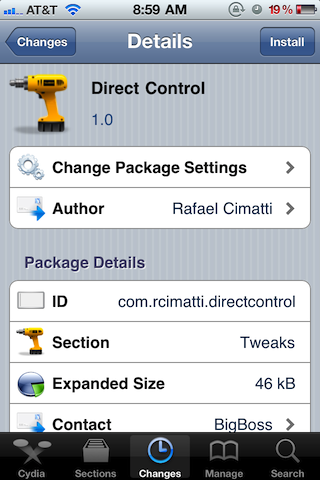 If you know me well at all, you know how much I love the jailbreak app SwitcherPlus. My infatuation with that app is well documented. The reason I like it so much is because it adds real value and benefit to the iPhone experience by making the task switcher more usable and intuitive.

Well, DirectControl is a lot like SwitcherPlus, that is, if SwitcherPlus went on a crash diet and lost like 100 pounds. In other words, it takes one feature that SwitcherPlus does well, and offers it to you in a single tweak. Does that make DirectControl any more or less compelling?

I suppose if all you care about is accessing your iPod controls, then you could make an argument for DirectControl. But SwitcherPlus is a full fledged app that offers end users a much more comprehensive feature set, and all of said features are useful. Plus, just like the tweak in question, it also includes options to open directly to iPod controls.

It’s just hard for me to recommend DirectControl when SwitcherPlus does iPod controls along with a flashlight, favorites, and options for lock screen behavior. It’s not too bloated, and it’s not too minimal, it’s just the right size for an app of its type. For this reason, I recommend SwitcherPlus over DirectControl.

Both apps are available on the Cydia store for jailbroken iPhones running iOS 4+. Which one do you recommend?