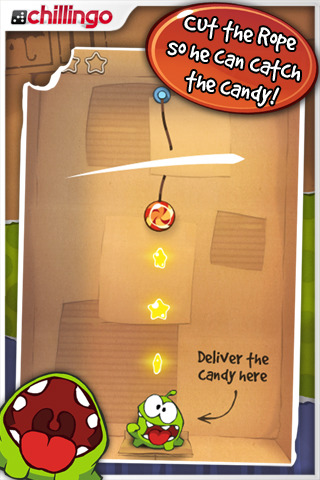 Cut The Rope was developed by ZeptoLab and is an ingenious puzzle game which features addictive game play at its best. This concept is simple, strategically cutting ropes (with a swipe of your finger) dangling with candy to feed a green monster named “Om Nom.”

Game play almost seems endless with 100 diverse levels, which are divided into 4 different boxes. Each box contains 25 levels and to progress to other boxes you must collect a specified number of stars to unlock the next box…

Simplicity is really one of the keys to success for iDevice games. There really is no learning curve to this game, as the concept is extremely simple. Strategically cut the strings with the candy to feed Om Nom while also trying to collect the stars. Each level has 3 stars, and you don’t have to get them all, but if you want to open the next box you have to try to get the most stars as possible from each level.

The game does get progressively harder. New elements such as bubbles, spiders, and air torrents add more depth and ultimately variety of game play. Some of you puzzle game lovers will be keen on this, but others of you will be pulling your hair out!

Several levels get extremely hard (if not impossible) and you will find yourself failing time after time. However, ZeptoLab was kind enough to add the ability to skip levels and come back. This is also helpful when you redo levels in an attempt to get more stars.

The design and graphics really show that ZeptoLab is here to compete with the iTunes App Store. The candy and string bounce around realistically; somewhat reminiscent of those Yoyo’s from back in the day. You have to accurately judge how they bounce to get the stars, dodge obstacles and feed the adorable Om Nom.

There is a high level of replayability and this is a great game for you daily commuters. For only $.99, Cut the Rope [iTunes Link] gives you so much and I highly recommend it for you puzzle lovers.