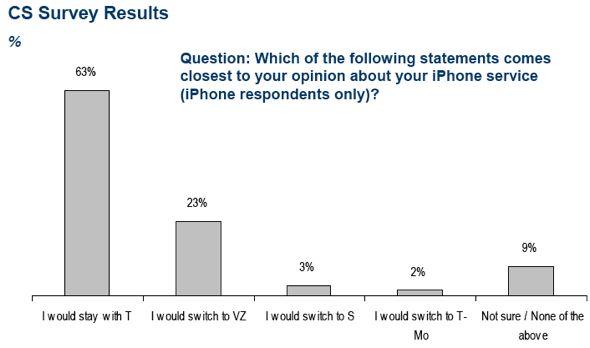 A new survey by Credit Suisse shows that only 23% of AT&T customers would be willing to switch to Verizon if the carrier got the iPhone. The good old talk about a Verizon iPhone. Sigh. It seems I am the only believing there won’t be a Verizon iPhone next year.

By combining data from the survey with current subscription rates, Credit Suisse calculated that 1.4 million of AT&T’s iPhone subscribers are at risk of switching to Verizon. According to Credit Suisse, the estimate, which counts for only a small percentage of AT&T’s subscriber base, would have less of an impact on AT&T’s bottom line than previously expected.

I’ve said it before and I’ll say it again: I am very satisfied with AT&T. They’ve always been very helpful, I rarely (if ever) drop calls, and really, they’re just as evil as any other mobile carrier. Besides, seeing how Verizon customer service treated my fiancee when she decided to end her contract, I would never even consider going with them.

What about you? Would you switch to Verizon if they had the iPhone tomorrow?