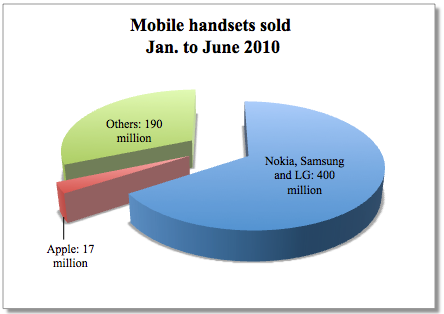 With the Apple stock flying at a all-time high these days, this new report shows that not only Apple is able to make great products that sell like hot cakes, but most importantly, they are making tons of money on each product sold.

According to Michael Walkley of the Canaccord Genuity Group, Apple made about 3% of all the smartphones in the first half of 2010, but it actually raked in 39% of the industry’s profits…

We are also impressed with Apple’s ability to monetize its innovative products through selling high-margin consumer products that drive strong earnings results and growth trends for Apple shareholders. A case in point is the mobile phone market, where most handset OEMs struggle to post a profit or even 10% operating margins (except RIM and recently HTC), while we estimate Apple boasts roughly 50% gross margin and 30%+ operating margin for its iPhone products.

In fact, Nokia, Samsung and LG combined sold roughly 400M mobile handsets worldwide in the first half of 2010 with a combined value share of 32% of handset industry profits, while Apple sold roughly 17M units over the same time period and captured an estimated 39% of industry profits, or greater than the top three global handset OEMs combined. Apple leads the industry in every metric except for unit share… 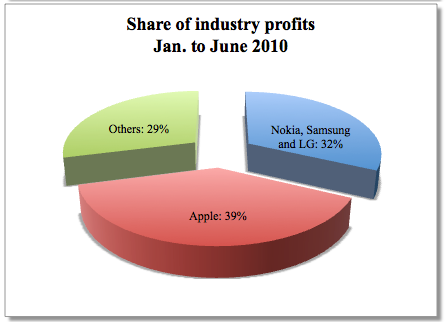 Yes, that means that even though Apple sells 23 times less smartphones that Nokia, Samsung, and LG combined, it’s still making more money than all of them together.