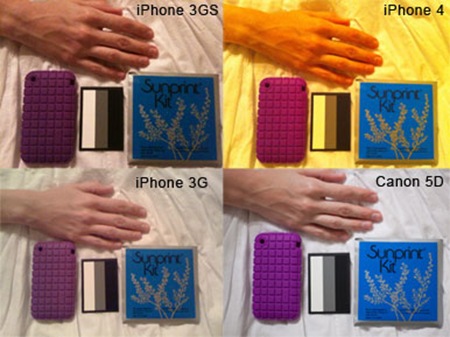 There were certainly no shortage of complaints when the iPhone 4 was released, or perhaps there was no shortage of coverage relating to every issue users experienced. Whatever perspective you take there was an issue that didn’t receive much attention compared to the rest. There seemed to be a couple problems relating discoloring of photos in certain light.

TUAW reported on it briefly while forums seem to run wild with complaints. This wasn’t the only complaint regarding the camera as Apple’s discussion board showed us. Other users seemed to be getting a green blob appearing in their photos with the intensity of the discrepancy occurring while indoors with florescent style lighting.

Whether you’re in sunlight, florescent lighting or otherwise the hues given off will vary. It seems like this would be completely software based so I wonder if this will be among the fixes iOS 4.1 will offer. Apple didn’t mention this issue being addressed but then again they didn’t really acknowledge it as a problem to begin with. That doesn’t seem promising.

I certainly deal with very low quality of white balance when shooting pictures indoors with florescent lighting. You would have a hard time believing that the same crisp pictures I’ve captured in other conditions could possibly have come from the same device offering the yellow photos.

Are the readers of iDB having the same camera issues that those on the message boards speak of? Whether you do or not, do you think this will be taken care of with the arrival of iOS 4.1? Surely someone here is using a GM copy that could help us out. Let us know your thoughts in the perfectly balanced comment box below.