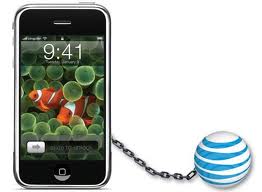 We reported earlier in the month about AT&T downplaying and avoiding questions about the effects it will suffer if and when their iPhone exclusivity runs out. The tune is staying the same from the telephone provider but now they are citing tablets such as the iPad as their future lifeline.

Without getting specific about the rumors of a Verizon iPhone, Glen Lurie (AT&T emerging devices president) says that the company plans to keep “plugging along” at the same rate of success they are now. Yeah, right…

Electronista outlines the representatives opinion about the emerging possibilities of tablets becoming full fledged computers. Lurie talked about products like the iPad being priced in the future at $300-$1000. Currently the iPad ranges from $499-$830.

While I agree with the president and his analysis surrounding the popularity of tablets, I don’t see what any of that has to do with sharing the revenue of their best selling product. Selling lots of tablets is great and all, but reeling in the dough from monthly phone contracts is where the real money comes from.

I don’t expect any white flags to be waived though it gets clearer each day that everyone aware of the situation has been coached to steer away from the topic at hand. What would you say about losing the exclusivity if you represented AT&T today?