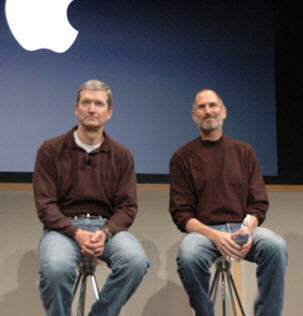 During their quarterly earnings conference call on Monday, Tim Cook was asked specifically if all of the bad press about the iPhone 4’s antenna problems was effecting iPhone sales. According to Apple’s Chief Operating Officer, it’s the exact opposite. “We are selling them way faster than we can make them! My phone is ringing off the hook with people that want more supply.”

Maybe even more interesting are the actual sales numbers Apple spouted off for the period that ended June 26, sales gained 61% to a record $15.7 billion, topping analysts’ $14.7 billion estimate. Over 3 million iPhones sold so far and in most places they are still in short supply. (Yeah so goobers like me thinking they’d hold out a few weeks for the white one, but are tired of waiting so said screw it I’ll get the black one, but now there’s no black ones available either).

When asked directly if Apple purposely shortens supply to create a “buzz” around their products Cook replied, “We want to sell as my iPhone 4s as possible, I don’t know where that comes from.”  And hopefully relief is on the way as the white version of the iPhone 4 is slated to become available within the next week or so.