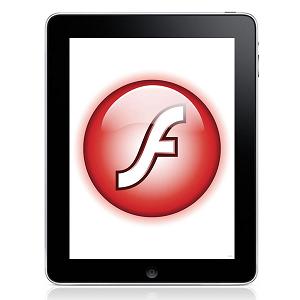 Ok so it’s not native yet but we’ve got another semi-solution for you. For those of you who weren’t fans of Smokescreen, comes “Flash in a Pinch”  by Artefact. It gives you another option for getting Flash on your iPad.

Love it or hate it, the fact is there is still a lot of content on the internet that is only available in flash. Take HULU for example. I drool just thinking of Hulu’s massive library on my iPad’s sexy screen. But unfortunately because the entire site is coded in Adobe Flash and that format is not currently supported in the iPad’s web browser, this perfect union may never be.

Now that’s not to say that in the future Hulu won’t re-encode some or all of its library in HTML5 and enable viewing from iPads and other devices. Personally I think they have a paid/subscription app or service on the way for such devices, but that’s neither here nor there.

The fact of the matter is they, like many websites, are currently using Adobe and haven’t shown any signs of changing. Now I agree with Apple and Mr. Jobs on this one. Adobe Flash is resource heavy (meaning it drains your battery faster), it has a tendency to crash (taking with it the OS that’s running it), and it’s got serious security problems. If your company, your brand, Apple, is known for being ‘simple’ and ‘just working’, why would you want such an unstable platform running on your devices?

Steve Jobs sums it up pretty nicely on Apple’s website with Thoughts on Flash. In the above mentioned article, Steve says “When we see Flash performing well on a mobile device, we’ll add support.” After years of waiting, they obviously haven’t been able to please the CEO in the black turtle neck. Or any other cell phone manufacturer for that matter.

Adobe flash support was originally supposed to ship on phones in late 2008, then 2009, 1st and 2nd half. Some Android phones claim flash support, but most of it is “Flash Lite” that gives limited access to a small number of flash web sites. So it looks like we’re playing the waiting game.

Either Adobe has to rebuild flash and fix some serious flaws, or websites like HULU may eventually have to turn to open platforms such as HTML5. Or things could stay the exact same and we’ll have to tote around ugly 3 GHz Android phones with no battery life if we want a decent flash on the go experience.

Or, you can try out an alternative solution like smoke screen or Flash in a Pinch. Now neither one of these run natively obviously, but they do enable your iPad to access flash contents. Both use very different back end technology, but essentially accomplish the same thing.

If you checked out the link for Flash in Pinch, you might have caught the video of the iPad running Flash in a Pinch to view what else, the HULU site. You then would have noticed how choppy the frame rates were even on fast broadband to wireless connection. This has to do with the fact that flash is not running natively. The video has to be encoded, sent off to remote servers, decoded, sent back to your device in a compatible format. Whew! No wonder it’s so choppy.

The group behind the technology of Flash in a Pinch, Artefact, also claim they can do this with Silverlight and other platforms as well that aren’t supported in mobile devices, and they are working on improving frame and bit rate during playback.

Either way you slice it, similar solutions were cooked up for viewing flash on the iPhone and just never seemed to pan out. So between that and that painful video I just watched, chances are I won’t be using either product to view flash on my iPad.

I will just have to hold on for an official announcements from one of the big dogs. But hats off to developers. These guys never cease to amaze me. The genius and man hours that went into develop something like this is incredible. The ability is obviously there it just needs some tweaking. Thank goodness people like this exist to keep us from living a black and white world.