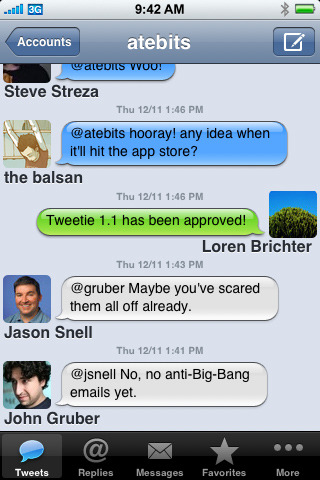 The interface is nice and feels good. But, there’s always a but. It takes a bit getting used to. Especially for users like me who used TwitterFon. You need to learn things like the “swipe” and other stuff. But it is relatively easy to master after a bit of use.

Tweetie definitely looks much better than any other Twitter app I have seen.

Tweetie is the only app I have seen with a sense of humor. It has a “Popularity Enhancer” feature. It is a joke really, but what it does is it gives you a flashlight and when you do the “swipe” it replaces the normal click sound with a fart sound. Quite funny and a joke on the App Store.

Tweetie is definetly more smooth than other free apps, and it does not crash or eat up all your RAM.

– An option for you to set the image compression for a smaller or normal size. You choose how much compression.

One feature I liked from TwitterFon is that when you were typing a new tweet, there was a @ button which showed all the people you are following. This is very handy. The developers of Tweetie told me they will add this in future updates.

I’m going to be honest. If you are constantly tweeting, or use Twitter everyday I recommend Tweetie. It’s smoothness and easy to use interface has won me over. I highly recommend this.

In my opinion, Tweetie is definitely worth $2.99 for those of you who use Twitter everyday or often. But for those who rarely ever use Twitter, I think you are better of with a free Twitter app.