Since I bought the iPhone 3G back in July, one of the features I have been using consistently is photo geotagging.  Immediately, I downloaded AirMe [iTunes link] from the App Store.  AirMe is what I use to judge all other photo uploading apps.  You can use AirMe to take a picture and it automatically uploads it to one of three sites: Facebook, Flickr or Picasa.  AirMe doesn’t have a multitude of features, but what it can do it does well.

This weekend I saw Pixelpipe – Media Gateway [iTunes link] in the App Store.  What intrigued me about this app is that you can upload your iPhone photos to multiple sites at the same time, unlike AirMe which is limited to one site.  Pixelpipe supports a mind-boggling 39 photo/video sharing sites, 10 blogging sites, e-mail and FTP.  And, like AirMe, Pixelpipe is free.  So, how could you go wrong with an app that does so much?  Unfortunately, it is the little things that matter most. 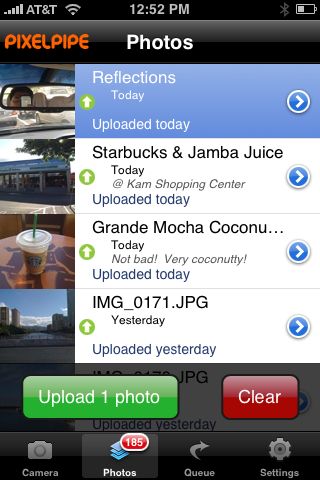 Adding websites to upload to is quite simple.  Each site is called a “destination.”  I added box.net, Flickr, Picasa, TwitPic, Blogger and Facebook.  One minor point is that the settings for Pixelpipe are changed within Safari, which I find unusual.  Settings for most apps are changed within the native app.

One big mistake I made is uploading all of my photos on my iPhone to Pixelpipe and then uploading them all to my destination sites.  I would suggest NOT hitting the “Upload All” button unless that’s what you really want to do.

The camera portion of Pixelpipe is one of its weakest points.  Pixelpipe does not geotag photos you take within the app.  Boo.  I have never seen a camera app that doesn’t allow geotagging.

Pixelpipe also has trouble uploading vertical pictures correctly to their destination sites.  I took two pictures with a vertical orientation.  I named them “Reflections” and “Grande Mocha Coconut Frappaccino.”  In Pixelpipe and in my Camera Roll, the pictures are shown the way they should look – vertical.  But, the same picture at all other “destinations” are shown rotated horizontally as shown in the picture below. 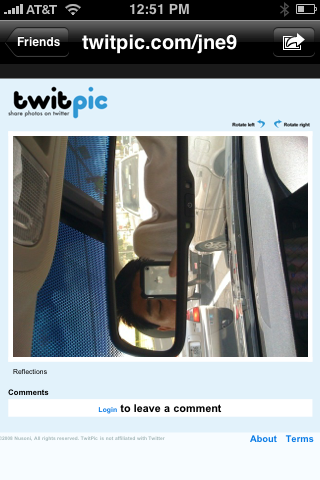 Again, I have never seen an app that is unable to handle the correct orientation of a picture.  Very, very disappointing.  Pictures taken with Pixelpipe in a horizontal orientation are uploaded correctly.

On the other hand, one of the great features of Pixelpipe is the ability to change the title, description and tags of the picture before you upload it.

Still, a lack of geotagging and the inability to handle vertically-oriented pictures correctly are dealbreakers for me.  While uploading pictures to multiple websites is a great idea, I won’t do it at the cost of the basic features I’m already accustomed to.