A clearly exasperated CoolStar offered an update on the status of the upcoming Cheyote jailbreak tool for iOS & iPadOS 15.0-15.1.1 this Friday evening, which suggested that a public release wouldn’t happen for at least another 4 weeks, or perhaps even longer.

Citing the update, shared via a series of Tweets, one of the primary roadblocks appears to be tweak injection; that’s on top of the extra bugs that still need to be ironed out, as discussed by CoolStar on Thursday. The vast majority of available jailbreak tweaks still only use Substitute APIs, whereas Cheyote will be running a version of libhooker that stays within the bounds of the rootless dynamic.

CoolStar states that she has been pushing for more jailbreak tweak developers to migrate to libhooker-based APIs for years, but it seems as if most developers have been slower than what would have been preferred to adopt it. Furthermore, users and developers alike continue to use what CoolStar calls ‘outdated’ software, citing things such as Cydia and Substitute as examples: 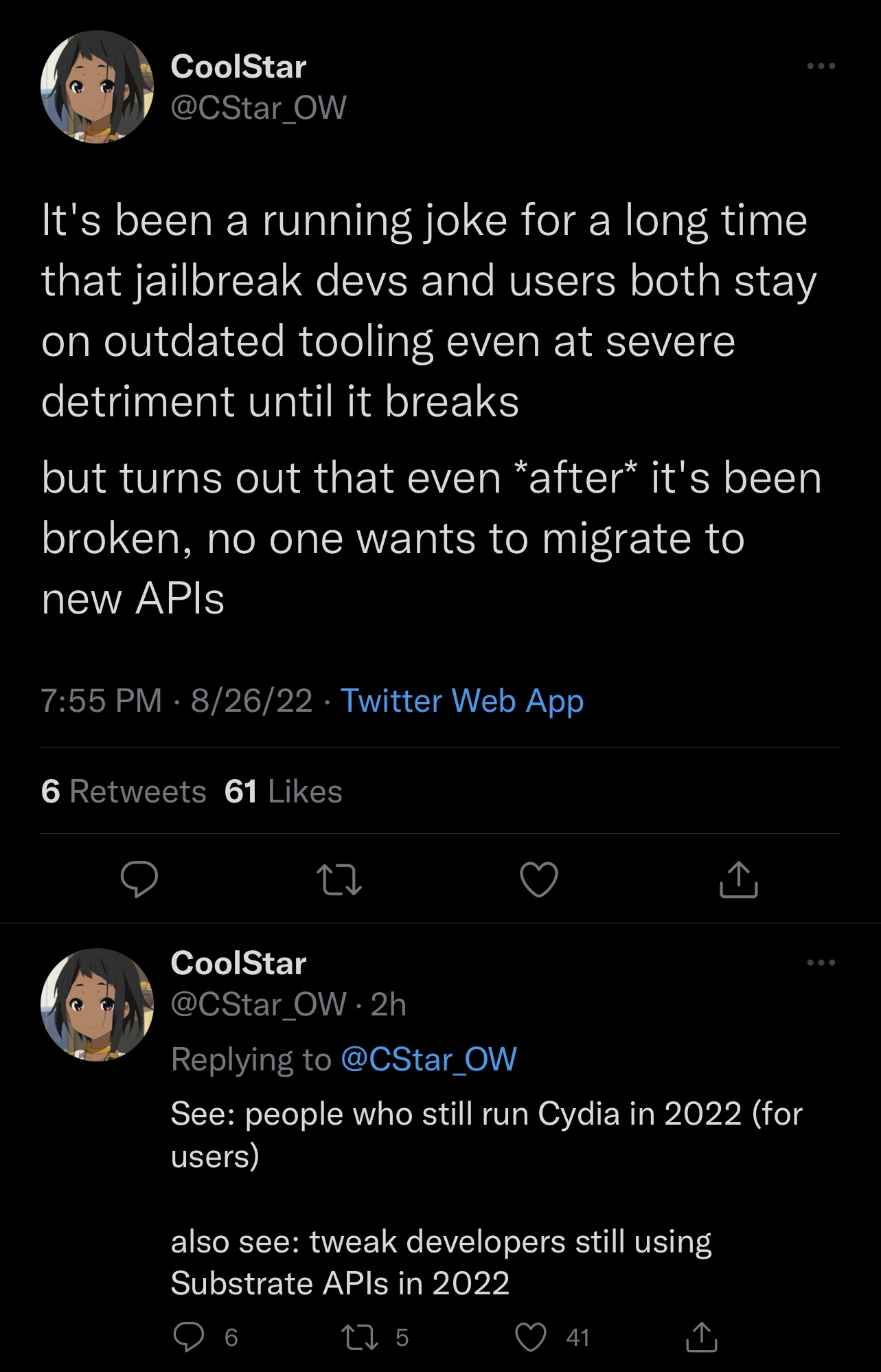 As the explanation continued, CoolStar noted that even if an iOS & iPadOS 15 jailbreak dropped sooner rather than later, fewer than four known jailbreak tweaks would work properly on it at this time. Having said that, rushing its completion seems moot, as jailbreak tweak developers haven’t had the time, or apparently even the interest, in migrating to a different API.

One thing we can gather from CoolStar’s Tweets is that planned upgrades are coming to libhooker to work with iOS & iPadOS 15, however those new features won’t be utilized by jailbreak tweaks that don’t support the libhooker API. With that in mind, it seems obvious that tweak developers will have a lot of work to do when Cheyote launches if they plan to support jailbreak tweak releases on iOS & iPadOS 15.

We should note for our readers’ sakes that while CoolStar cited four weeks as the absolute shortest timeline for releasing the Cheyote jailbreak, it’s likely that it will be longer than that, as CoolStar has discussed being busy with other, more lucrative projects, namely in the ChromeOS scene.

So long story short, we at iDownloadBlog recommend that you don’t beg jailbreak developers for news or updates for upcoming releases and continue to practice patience if you’re waiting on iOS or iPadOS 15.0-15.1.1. Cheyote will come eventually, but it’ll be ready when it’s ready, and we’ll be here to let you know when that happens, along with any updates along the way.