The DelayOTA method of upgrading to unsigned firmware became popular starting with iOS & iPadOS 15, especially given the fact that the Odyssey Team’s upcoming Cheyote jailbreak for iOS & iPadOS 15 wouldn’t support any version newer than 15.1.1. 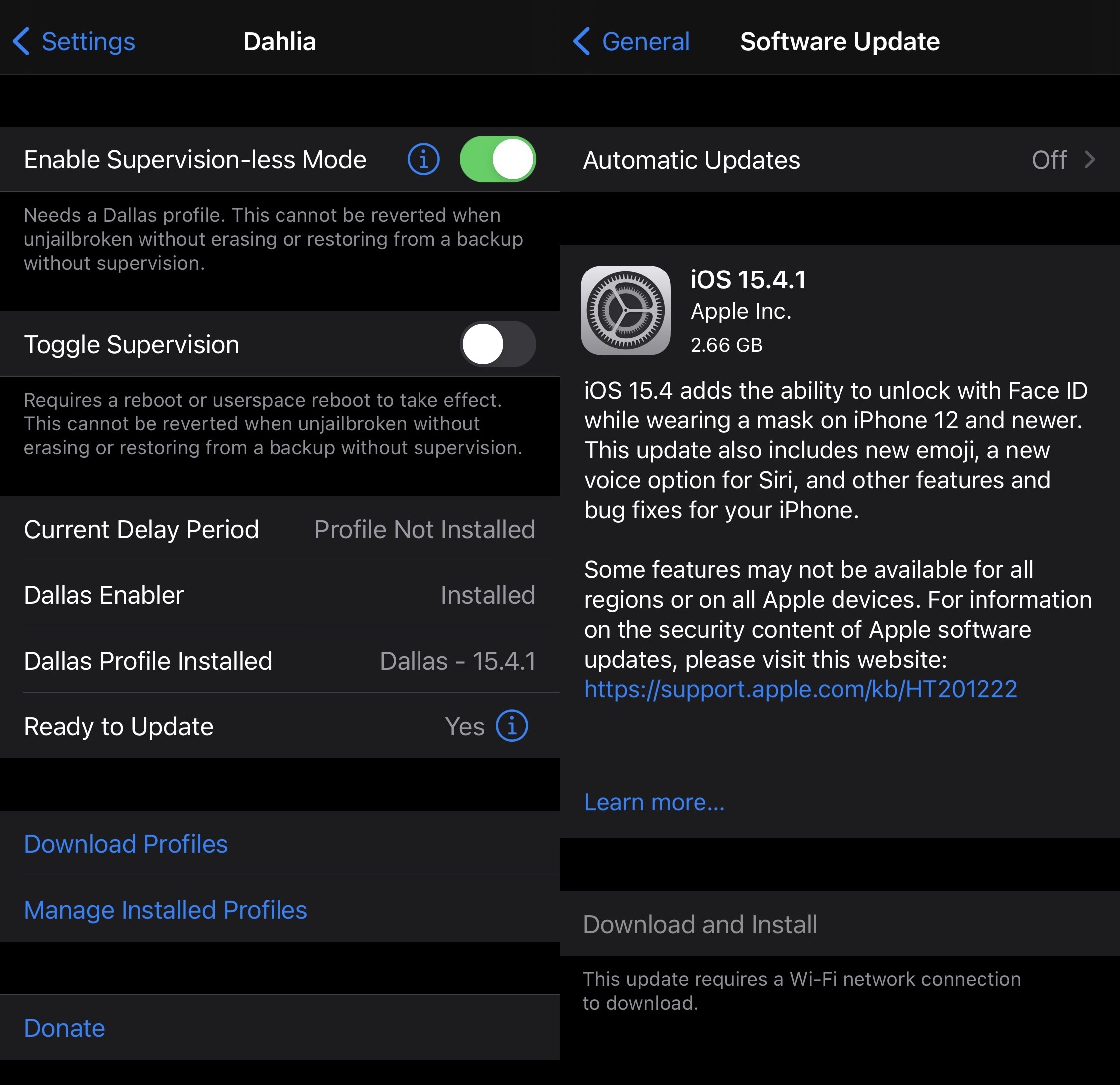 The popular method for upgrading to upgrading to unsigned firmware hasn’t gone anywhere; but given the lack of jailbreak news for iOS & iPadOS 15.2 or later, it isn’t something you hear much about anymore. Still, that hasn’t stopped DelayOTA pioneer Dhinakg from releasing a new utility for jailbroken devices called Dahlia that makes using DelayOTA even easier.

Dahlia is an on-device user interface for preparing to use the DelayOTA unsigned firmware upgrade method on jailbroken iPhones that supports both supervised mode and unsupervised mode. While the supervised mode works just as you’d expect, the unsupervised mode uses a Dallas profile instead – Dallas is a separate jailbreak tweak by Dhinakg that allows for OTA server redirection.

As you’ll see from the screenshot examples above, the tweak displays whether or not you’ve installed the Dallas Enabler, if you have a Dallas profile installed, and what firmware you’re currently ready to update to. In our case, we have a device running iOS 14.8 and installed the iOS 15.4.1 Dallas profile, so the Dallas method allows us to use the built-in over the air (OTA) Software Update function to install iOS 15.4.1.

Citing the /r/jailbreak release thread for Dahlia, Dallas is now considered a legacy jailbreak tweak and may soon be removed in place of the newer Dahlia jailbreak tweak. Dahlia includes useful helper that can guide you through the process, especially when things appear to go wrong while attempting to use DelayOTA.

Here are some notes to get started per the /r/jailbreak thread:

You can find a full-fledged guide on delayed OTAs over at ios.cfw.guide, but here are some basic steps. Highly recommend following the guide.

• UI is a little buggy on small devices

If you’re interested in trying Dhinakg’s new Dahlia jailbreak tweak and seeing what it’s all about, then you can acquire it for free from Dhinakg’s personal repository via your favorite package manager app. Don’t forget to also add Cadoth’s repository, linked above, to install an important dependency.

Those who aren’t already using Dhinakg’s personal repository can add it to their package manager app of choice by using the URL provided below:

What are your thoughts about Dhinakg’s new Dahlia jailbreak add-on? Be sure to let us know in the comments section down below.