Apple’s iOS 16 software can transfer n eSIM onto another iPhone via Bluetooth, simplifying transferring your phone number from your old iPhone to your new one. 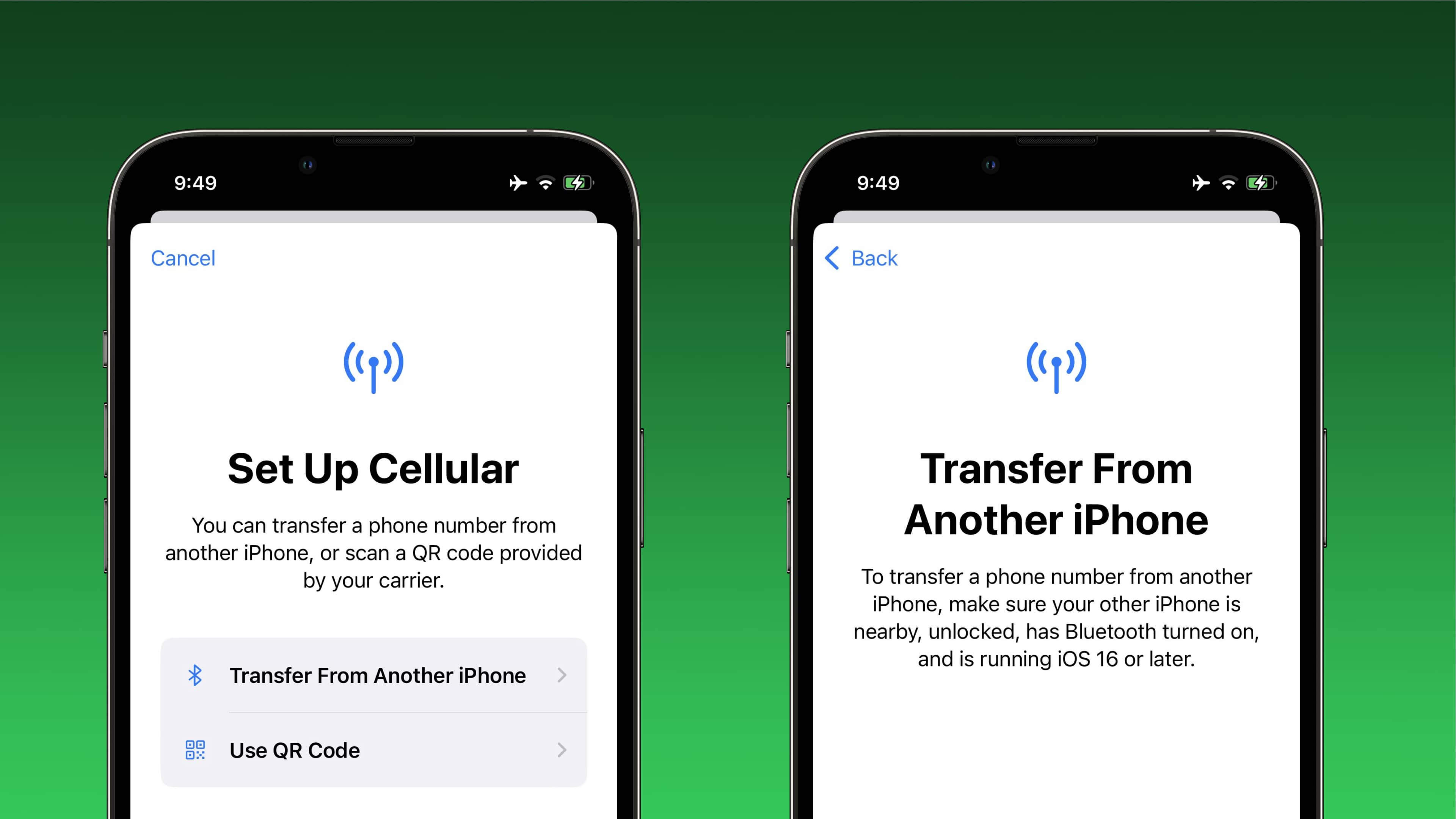 New in iOS 16: Swap your eSIM to a new iPhone

Twitter user Carson Waldrop first spotted that iOS 16 lets users transfer their eSIMs from one iPhone to another via Bluetooth. “This previously wasn’t the case and you had to just get a new eSIM from the carrier in question,” he noted. At the very least, you had to scan a QR code provided by your carrier. In the worst-case scenario, you might even have to visit a physical carrier store to get your eSIM swapped.

Wireless eSIM transfer, part of the iOS 16 setup process, should allow you to continue using your phone number on a new phone without having to deal with carrier apps, customer service and QR codes. According to Apple, the following conditions must be met to transfer your phone number from another iPhone:

The new feature is in addition to the existing process of scanning a QR code provided by your carrier. It could be particularly helpful for those times when a carrier won’t deliver an eSIM via QR code technology (some carriers may even force you to visit their physical store to perform an eSIM transfer!).

This new capability in iOS 16 could remove the friction associated with transferring an eSIM when buying a new iPhone. However, carriers must adopt this feature and some carriers may choose not to support it, at least now initially when iOS 16 launches this fall. eSIM is supported on the iPhoneXS and iPhone XR, the second-generation iPhone SE and the iPhone 11, iPhone 12 and iPhone 13 families. The iPhone 13 models are the first iPhones to pick up support for dual-eSIM technology, which allows you to add two or more cellular plans and use them simultaneously on a single device. Read: How to fix cellular data not working on iPhone

An eSIM, or electronic SIM, is a programmable version of a physical nano-SIM card embedded directly into a device. Because it’s just a piece of software running on a dedicated chip permanently attached to an iPhone, eSIM technology lets you switch carriers easily and activate a cellular plan without a physical nano-SIM card. You can even use multiple eSIMs on an iPhone to subscribe to several cellular plans.

Apple’s support page notes that the current process for transferring an eSIM from one iPhone to another involves reaching out to a carrier that will re-issue your eSIM. You can then scan the QR code that your carrier gave you to transfer your phone number to the new device. Some carriers may also require that you use their official iPhone app to perform an eSIM swap. In some cases, you may be asked to enter the information manually or even visit a carrier store to get a new eSIM.

When will iOS 16 launch?

The first iOS 16 beta arrived via developer.apple.com at the 2022 WWDCC on June 6, 2022. A public version for all users to try out on their iPhones is due sometime in July through the beta.apple.com website. iOS 16 will launch publicly in the fall. Some iOS 16 and iPadOS 16 features could change significantly, or even be delayed or pulled ahead of the official release. For further information about iOS 16, including the full list of new features and enhancements, visit apple.com/ios/ios-16-preview/.

How are you liking iOS 16’s eSIM transfer so far? Let us know in the comments!