Apple has billed the App Store as the safest way for iOS users to get apps on their devices. It’s such an important aspect of the business that it has essentially gone to war in an effort to keep things exactly the way they are. That, of course, includes its App Store fee, which can net the company upwards of 30% per in-store transaction. But, even as outside sources try to pressure some changes, Apple’s ready to beat the safety drum again.

Today, Apple published a press release showcasing a new fraud analysis of the App Store that looked over the digital storefront’s efforts over the course of 2021. According to the data, the App Store prevented a whopping total 1.6 million untrustworthy or otherwise risky apps from defrauding users through the course of last year.

Today, Apple is releasing an annual update to that analysis: In 2021, Apple protected customers from nearly $1.5 billion in potentially fraudulent transactions, and stopped over 1.6 million risky and vulnerable apps and app updates from defrauding users.
Apple’s efforts to prevent and reduce fraud on the App Store require continuous monitoring and vigilance across multiple teams. From App Review to Discovery Fraud, Apple’s ongoing commitment to protect users from fraudulent app activity demonstrates once again why independent, respected security experts have said the App Store is the safest place to find and download apps.

We saw Apple showcase the same sort of numbers last year, when the company said the App Store stopped more than $1.5 billion in potentially fraudulent transactions through 2020. So the gigantic number here isn’t moving all that much. However, this new research shows Apple rejected 34,000 apps for what it describes as having “hidden features,” while 157,000 were rejected or being described as a copycat app or spam. 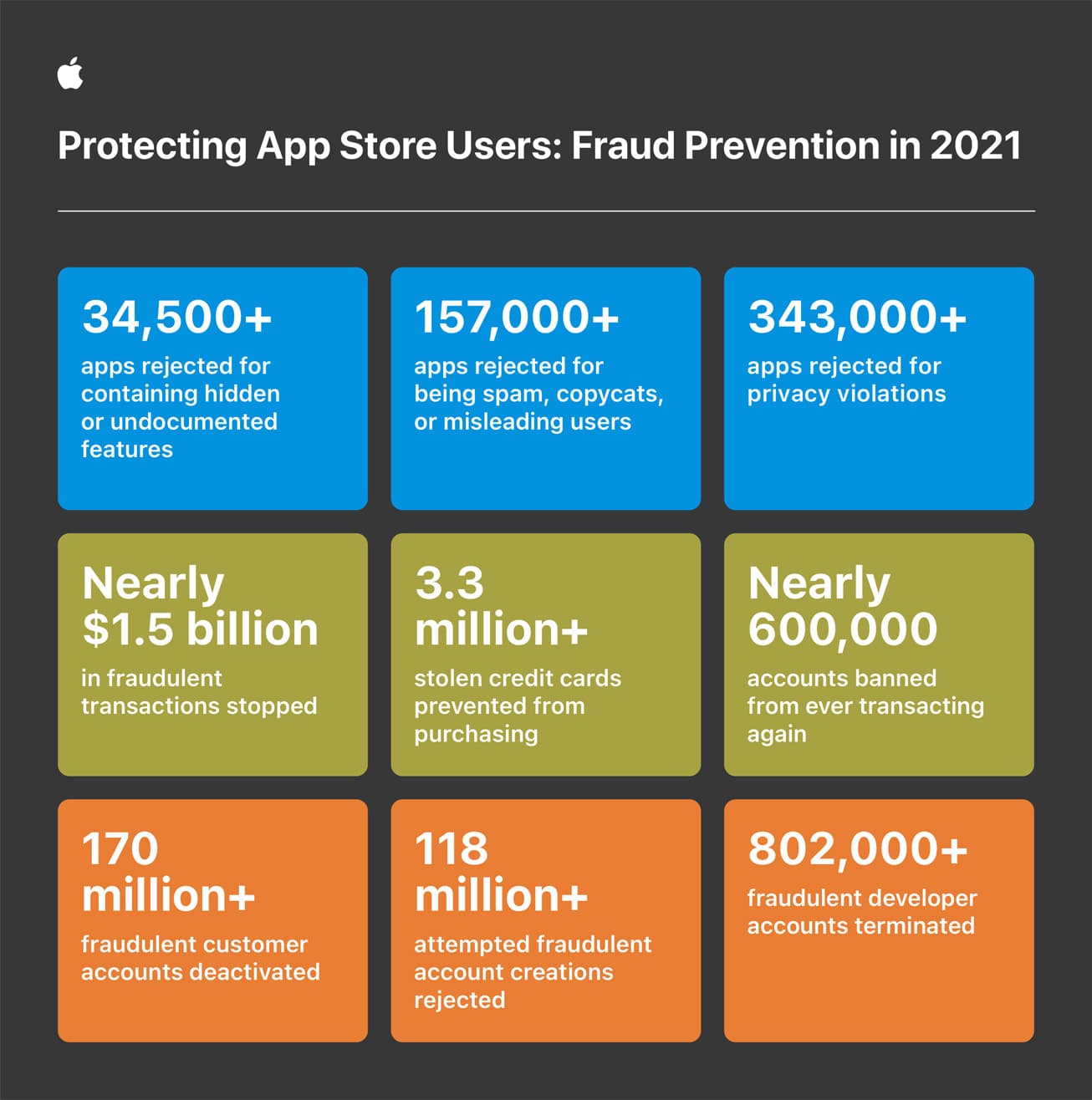 Account fraud is a big deal for developers, too:

When developer accounts are used for fraudulent purposes in a deceitful or especially egregious fashion, the offending developer’s Apple Developer Program account is terminated. While these people or entities deploy elaborate techniques to obscure their actions, Apple monitors to ensure related accounts are terminated quickly. As a result of these efforts, Apple terminated over 802,000 developer accounts in 2021. An additional 153,000 developer enrollments were rejected over fraud concerns, preventing these bad actors from submitting an app to the store.

In an effort to protect users who download apps beyond the safe and trusted App Store, over the last 12 months, Apple found and blocked over 63,500 illegitimate apps on pirate storefronts. These storefronts distribute malicious software often designed to resemble popular apps — or that modify popular apps without their developers’ authorization — while circumventing the App Store’s security protections.
Over the past month alone, Apple has blocked more than 3.3 million instances of apps distributed illicitly through its Enterprise Developer Program, which is designed to enable large organizations to develop and privately distribute their own apps for internal use. Offenders have sought to exploit this program in an attempt to flout App Review or involve a legitimate enterprise by compromising an insider to leak credentials needed to ship illicit content.

So, big numbers again. Apple is not shy about pointing out just how solid these types of results are. But, for the folks who pay attention, it’s not all rainbows and butterflies. There are still a ton of different scam and otherwise fraudulent apps that make their way into the App Store on a regular basis. And they do get away with stealing people’s money.
But, if nothing else, this type of report does show us that things could certainly be worse, right?
Tags App Store Apple News
Featured Stories