Meet Flash Pro Plus, a powerful, versatile 25,000 mAh portable power bank from Australian startup Chargeasap that’s worth having around. 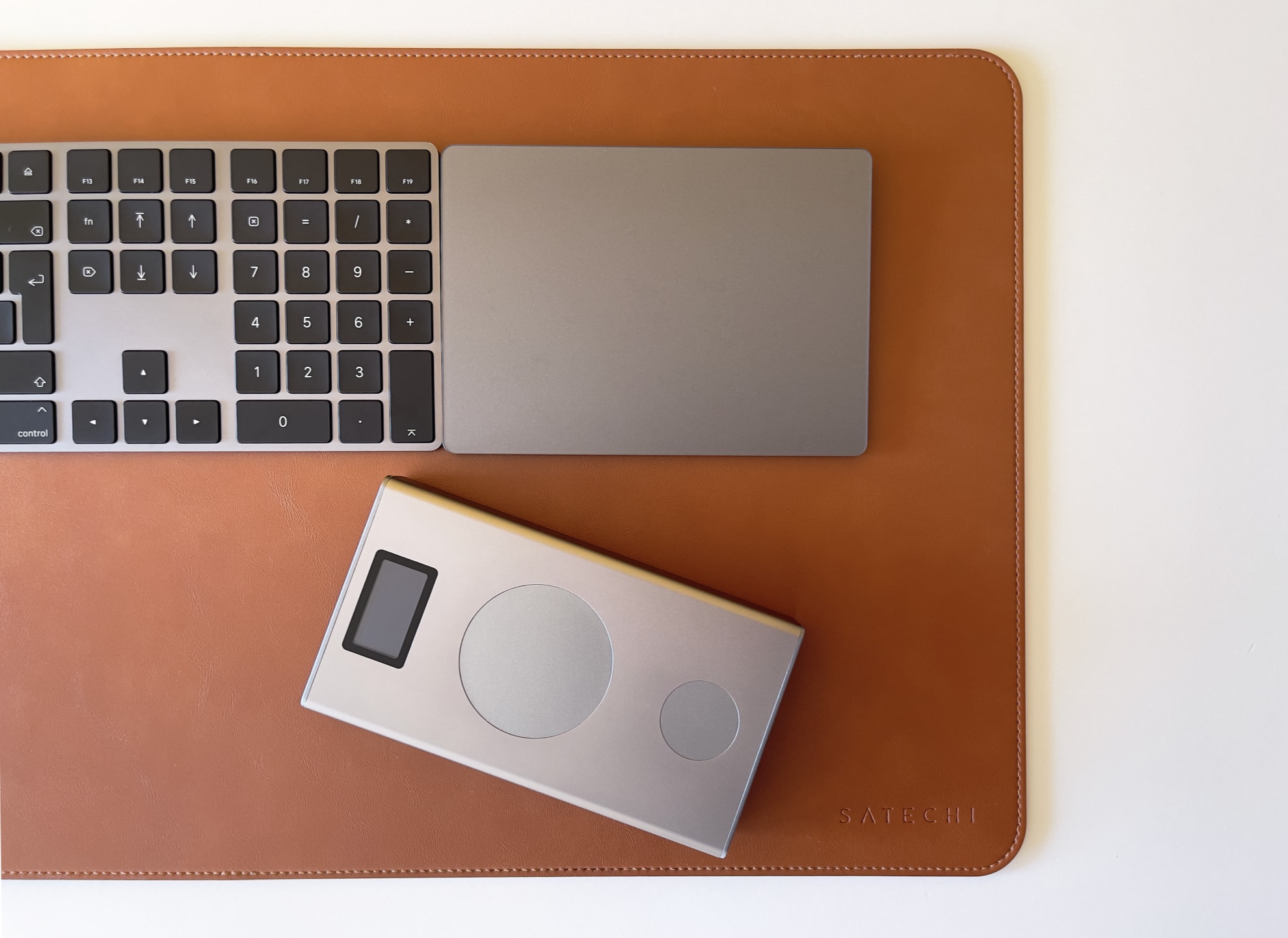 With the new Flash Pro Plus by Chargeasap, you can easily charge multiple Apple and non-Apple devices at once, like your MacBook Pro, iPhone, iPad and AirPods. Plus, it integrates dual magnetic wireless chargers compatible with MagSafe and Apple Watch.

We especially liked a tiny built-in screen for displaying real-time information such as the battery percentage remaining, the power output from each of the ports and more. Follow along with our quick review as we take a closer look at the Chargeasap Flash Pro Plus.

Meet the world’s most conductive material

For the original portable battery, dubbed just the Flash, Chargeasap has managed to raise over $1,6 from backers. After shipping out more than 11,000 units, the team went back to the drawing board to make it even better based on user feedback. The new Flash Pro Plus files as Chargeasap’s tenth crowdfunding project. Building on the legacy of the original Flash, the new Flash Pro Plus brings with it an updated, more functional design and enhanced features.

Flash Pro Plus uses Panasonic’s graphene composite batteries that take only one hour and ten minutes for a full charge of 25000 mAh. Recharging the device from dead to 80% takes about 45 minutes when used with a 100W USB-C charger. Don’t worry, graphene batteries never go above 60°C (140°F) nor do they bulge over time.

Moreover, the pocket-sized accessory provides four USB ports for charging, resulting in 190W of combined power across all ports. It integrates wireless charging and sports the maximum airline-safe battery capacity for TSA/EASA that’s allowed on airplanes, or 27000mAh and 100Wh. That’s quite impressive when you consider that many other similar products offer up to 60 watts of USB-C power.

Flash Pro Plus provides four USB ports on the backside, three USB-C and an additional USB-A one. The first USB-C port provides up to a hundred watts of power to charge, say, your power-hungry MacBook Pro.

Keep in mind that 100W charging requires a USB-C cable with an integrated E-Mark chip that prevents the cable from overheating and regulates the volts and amps correctly (Chartgeasap’s own Infinity cables that we reviewed back in 2019 meet these criteria).

I was able to charge my Intel-based 15″ MacBook Pro at the same speed as Apple’s included 96W charger. I even charged my Flash Pro Plus at 100% speed using my existing MacBook Pro charger (handy!) though it’ll work with many other chargers. 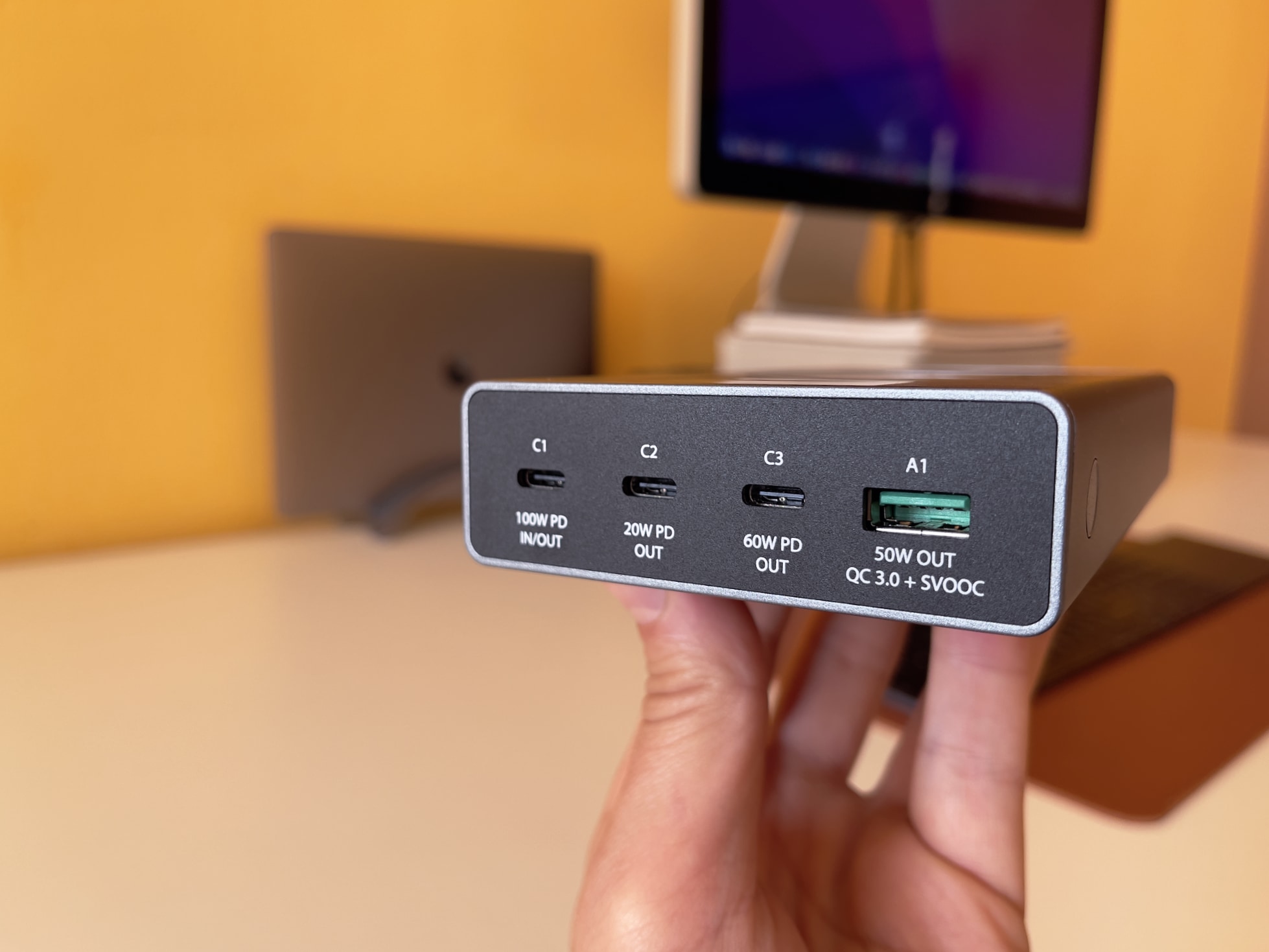 The second USB-C port is rated at 20 watts. You’ll be mostly using it to fast-charge your iPhone, iPad, digital camera, drone and so on. The last USB-C port is 60 watts. You’ll want to use it to charge power-hungry tablets like iPad Pro, or any other device that requires up to 60 watts of power, quicker than with Apple’s included charger.

Thanks to support for Qualcomm’s Quick Charge 3 protocol, Flash Pro Plus provides a dedicated 50W USB-A port you can use to charge non-Apple devices. It’s particularly great to see Flash Pro Plus supporting passthrough charging, which lets you charge your devices and Flash Pro Plus at the same time through a single power outlet.

As mentioned, the USB-C ports are compatible with the Power Delivery 3.0 protocol for intelligent fast-charging functions. It means your device negotiates its power requirements with your portable power bank. This lets you safely charge a low-power accessory like an AirPods charging case on the 60W port without worrying about frying it. 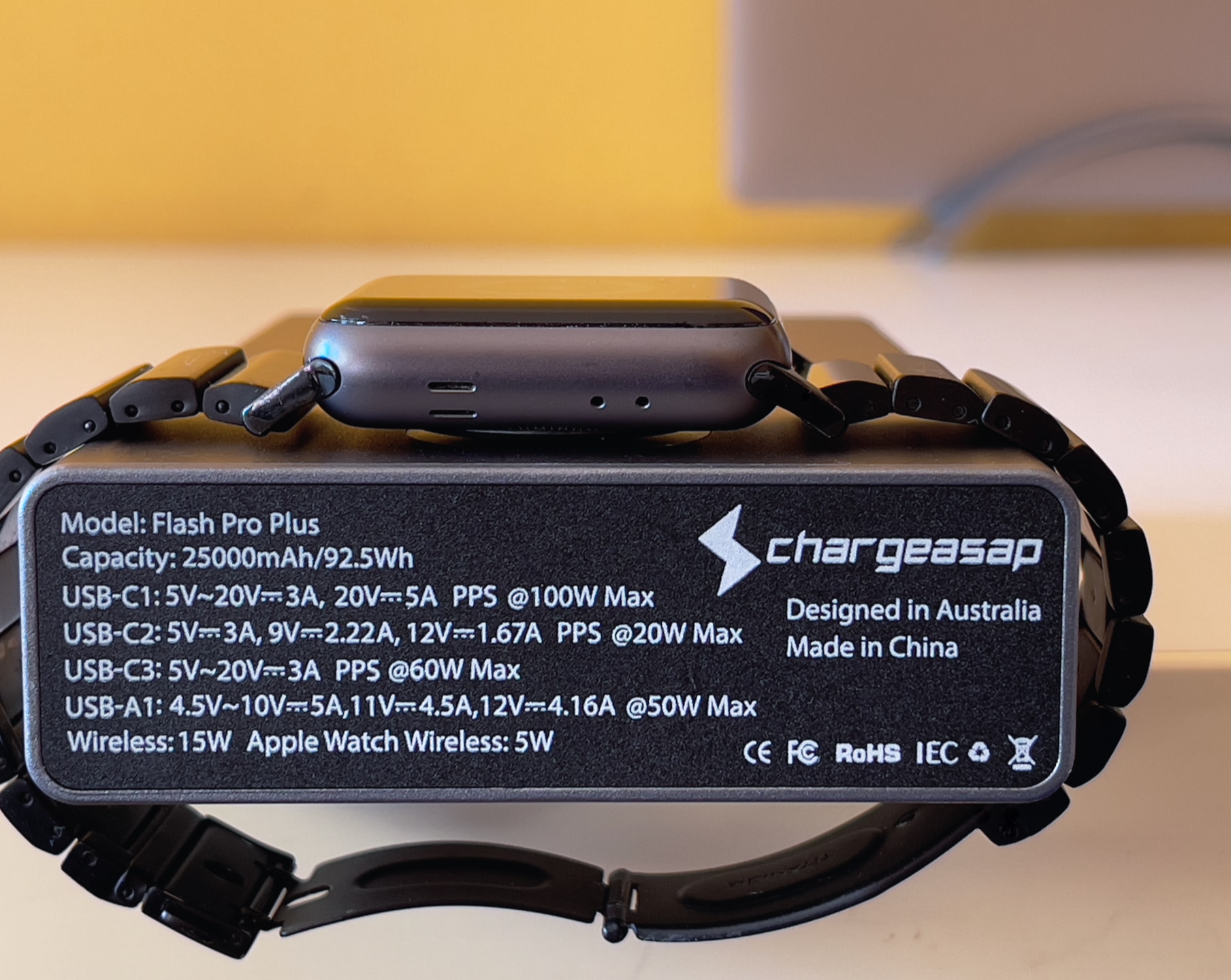 When used with Apple devices, Flash Pro Plus can charge four devices at once. When all three USB-C ports are used at once, each one will output the maximum wattage it’s rated at. If you add the 50W USB-A port to the mix, the 60W USB-C port will lower its output to 45W. Also, the 100W USB-C port will drop to 60W if the battery temperature hits 60°C (140°F), which is by design to protect the internals.

When charging six devices simultaneously (3x USB-C, 1x USB-A, 1x MagSafe and 1x Apple Watch), Flash Pro Plus is outputting a combined 195 watts of power. It’s very liberating knowing you can quickly charge a large laptop like a MacBook Pro or Dell XPS, a tablet (iPad), a flagship phone (iPhone 13 Pro Max, yet another flagship phone (wirelessly) and your Apple Watch (wirelessly) all at the same time!

Works with low-power devices, too

All three USB-C ports will detect when a low-voltage device is plugged, like your headphones, speakers or microphones so you can charge an even greater range of devices. Flash Pro Plus has built-in safety measures to protect the circuit and accessories. For instance, the portable battery will go into power reduction and automatic shutdown processing when the temperature reaches 60°C (140°F). 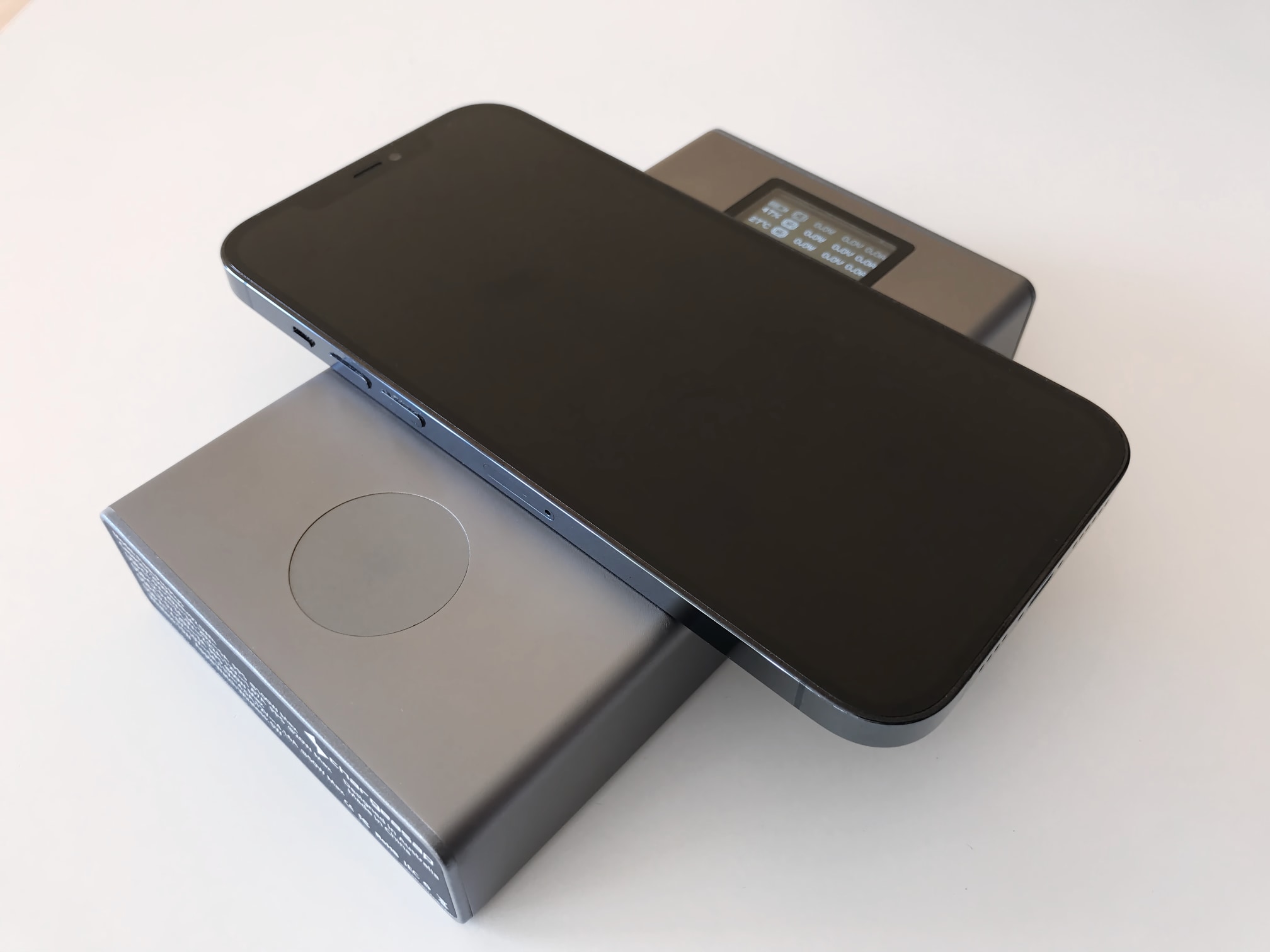 The bigger pad works with MagSafe and provides up to 15 watts of wireless power instead of the typical 5-10 watts you’d find in many slower wireless chargers out there. You’re getting the same wireless power output out of it as you do when charging your iPhone 12 or iPhone 13 on Apple’s MagSafe charger.

Just place your iPhone 12 or 13 atop it to magnetically attach for perfect alignment. Of course, devices without MagSafe must be manually aligned due to their lack of an array of magnets that interlock with MagSafe.

The smaller magnetic pad is for charging your Apple Watch at five watts. This is the same amount of power provided by the Apple Watch charger. 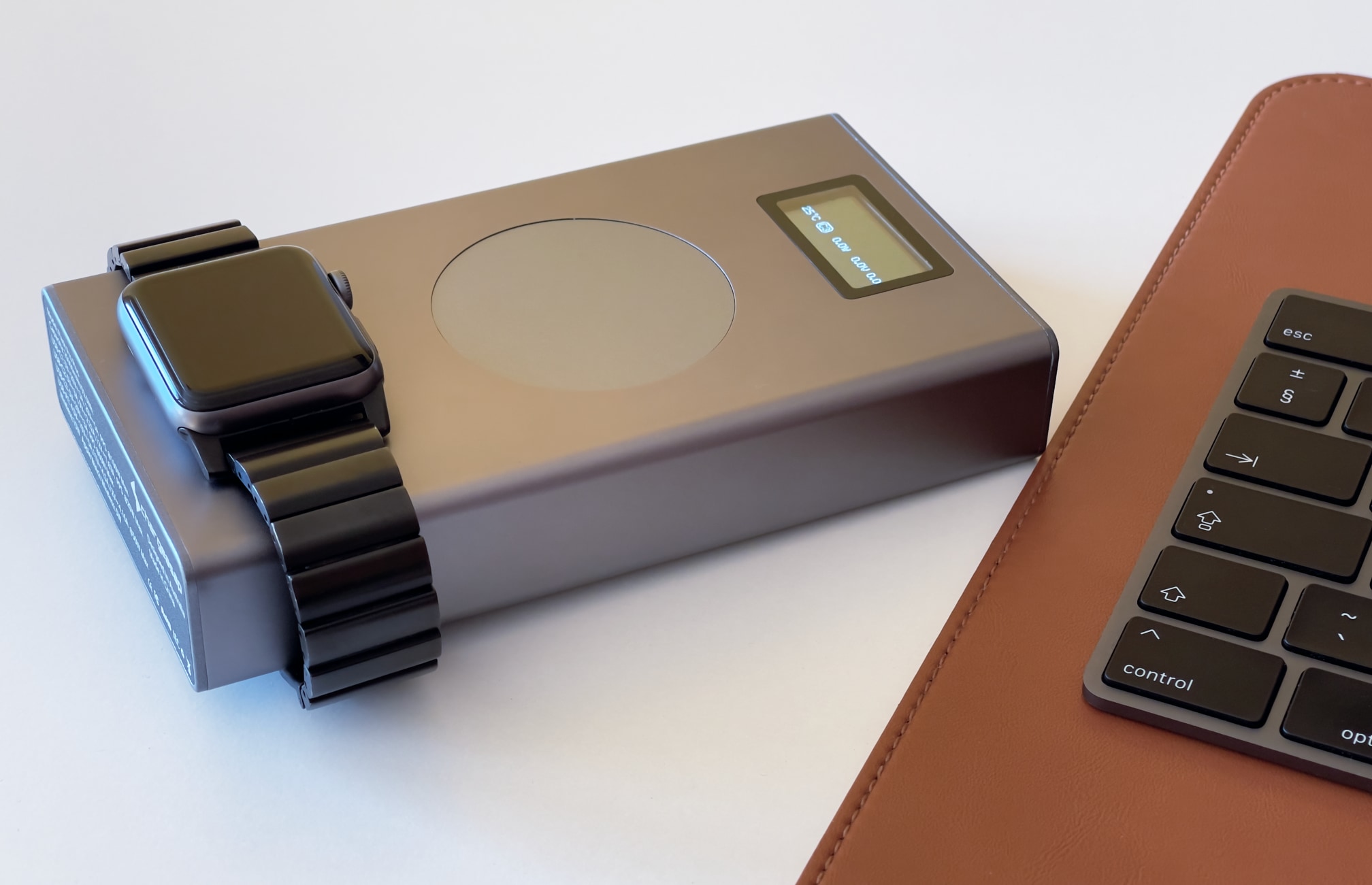 Put the watch on it and it’ll snap into place just like that, with perfect alignment and no worries about the watch sliding off the charger. This charging pad won’t charge Galaxy Watches as Samsung uses a charging coil different from Apple Watches. With its dual wireless charging design, Flash Pro Plus can wirelessly charge your iPhone and Apple Watch simultaneously — while also juicing up to four other devices, along with the portable battery itself, via USB.

Flash Pro Plus integrates a tiny 1.3-inch OLED screen capable of displaying a few lines of dot-matrix text. This gives the accessory a major advantage over ones that don’t have a status screen. The information displayed includes the battery percentage remaining, the power output from each of the ports and internal temperature. 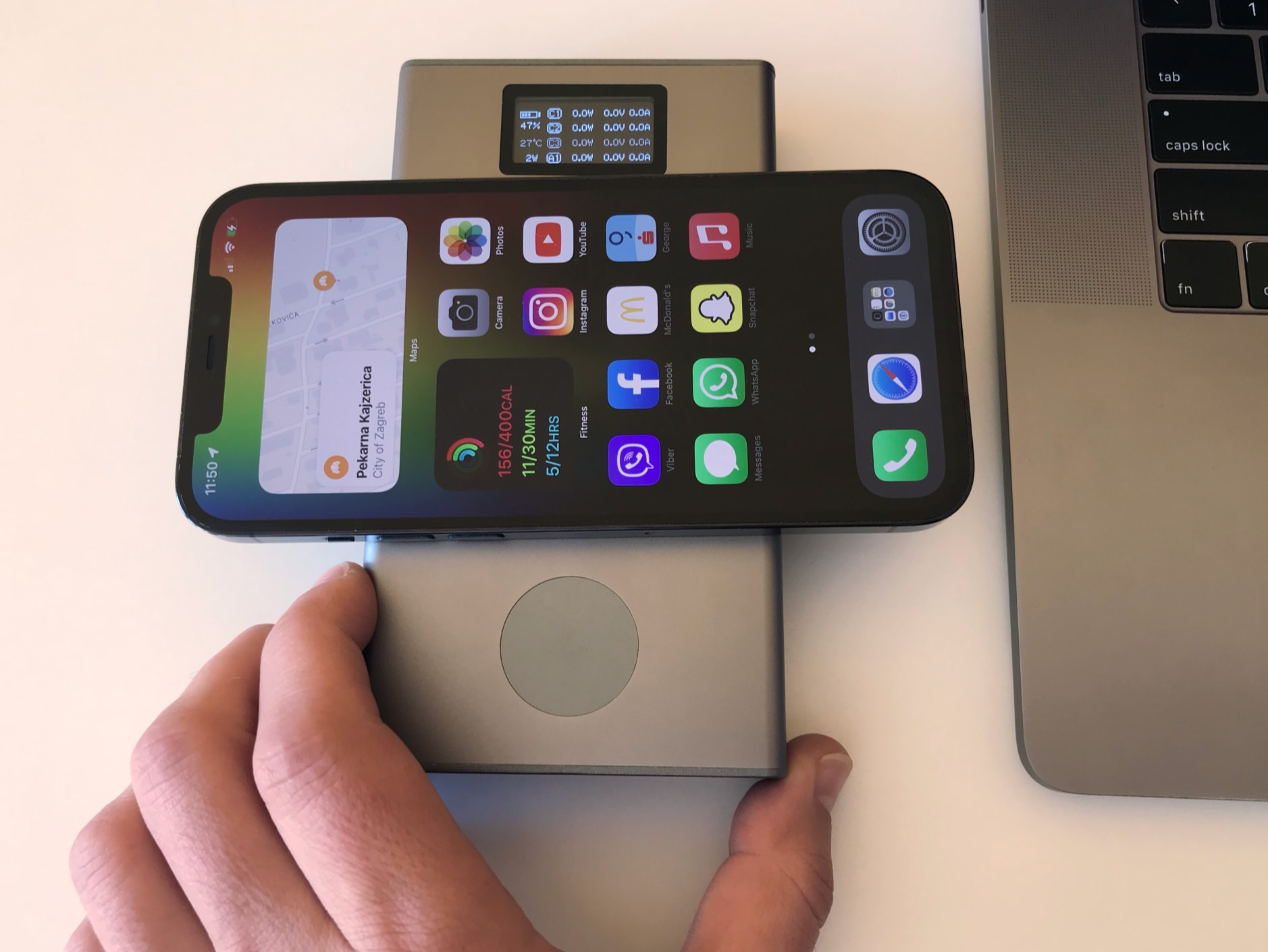 Simply out a device on a wireless charging pad or plug it into one of the ports and a few moments later you’ll see the power output measured in watts and amps, updated in real-time. This happens whenever you’re charging a device. If you don’t care about any of this data, simply ignore the display and it’ll turn off after a few seconds.

To turn it back on, press the power button on your Flash Pro Plus. Speaking of which the power button, it’s now more flush and easier to press than one on the original Flash.

The one potential issue (though not a biggie) that I identified: metallic bands like Apple’s Milanese Loop or Link Bracelet may scratch the portable power bank’s aluminum housing if you’re not careful, especially when wrapping such a band around the charger.

That’s not Chargeasap’s fault, I’m having the same issue when typing on my MacBook and wearing the watch with a metallic band. If I’m not careful when typing, the metallic band would occasionally scratch the aluminum surface of the palm rest. 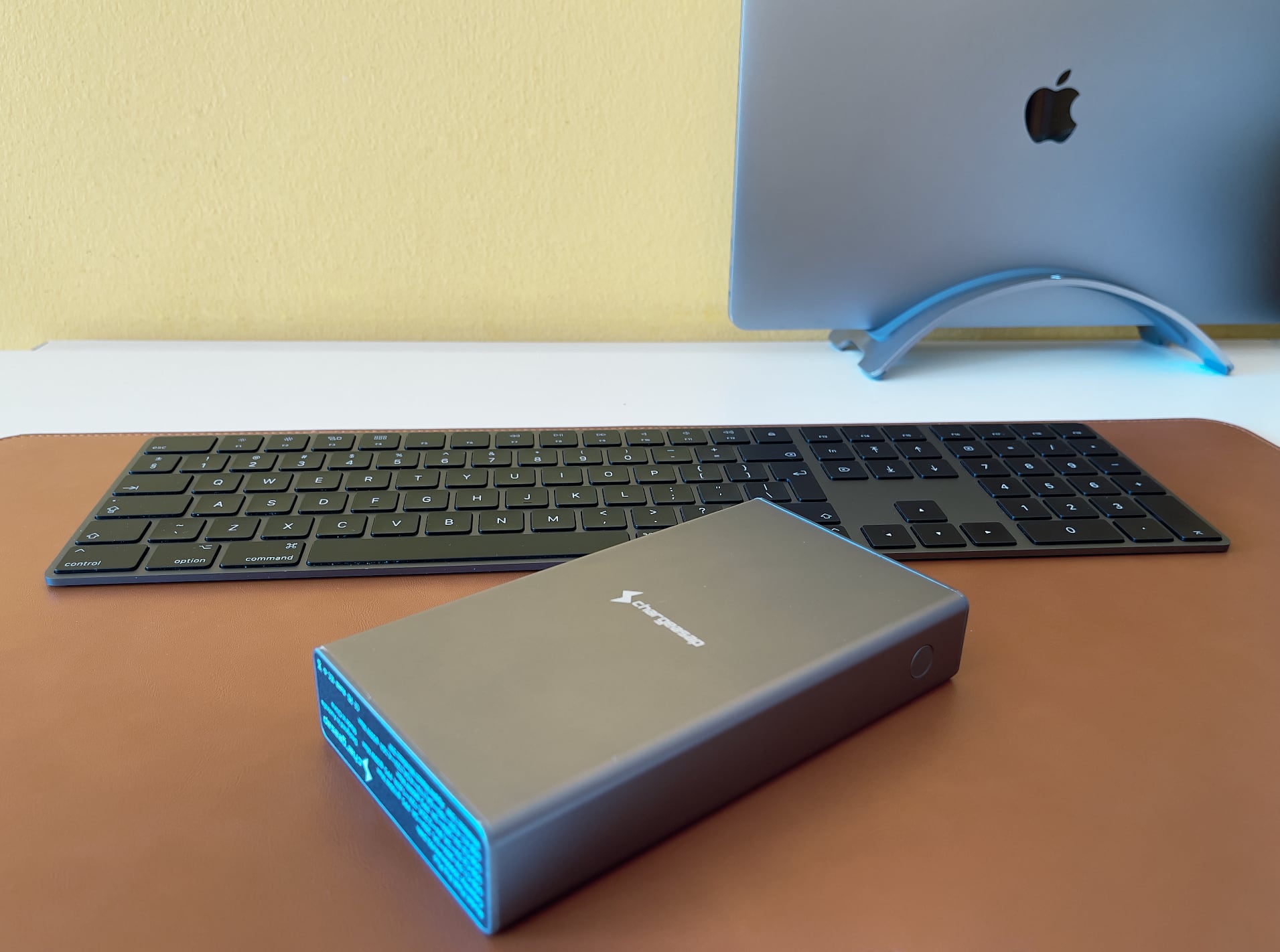 As a matter of fact, this is perhaps my biggest complaint about this accessory. I’m not sure if Chargeasap should have used less scratch-prone material for the housing, like plastics, or perhaps rubberized just the edges, but you’ll want to be careful when handling your Flash Pro Plus. If I were Chargeasap, I’d offer a companion case. As a matter of fact, Chargeasap reached out following the publication of this review to let our readers know that each Fash Pro and Flash Pro Plus comes with a bonus hard carry case included.

Take Flash Pro Plus with you wherever you go

With three USB-C ports, one USB-A port and not one but two wireless charging pads, this versatile portable battery gives you a total power output of 195W. The aluminum housing resembles space gray styling and will match your Apple aesthetic nicely.

The accessory has enough power to let you recharge your iPhone 12 from zero to 100% seven times and still have some juice left to top up your AirPods.

Aside from its attractive, minimalist design and versatility, this portable power bank weighs a bit more than the combined weight of two iPhone 13 Pros (about 583 grams, or about 1.28 pounds). So not only is Flash Pro Plus compatible with all your modern USB devices but is compact and light enough so you can just slip it in your bag or purse.

A pocket-sized cell for just about everyone

Is Flash Pro Plus for you? Like with all things in life, the answer to that question depends on how you use your devices. If you work from home and your iPhone is the only device you use while on the move, you may not need a portable power bank at all. 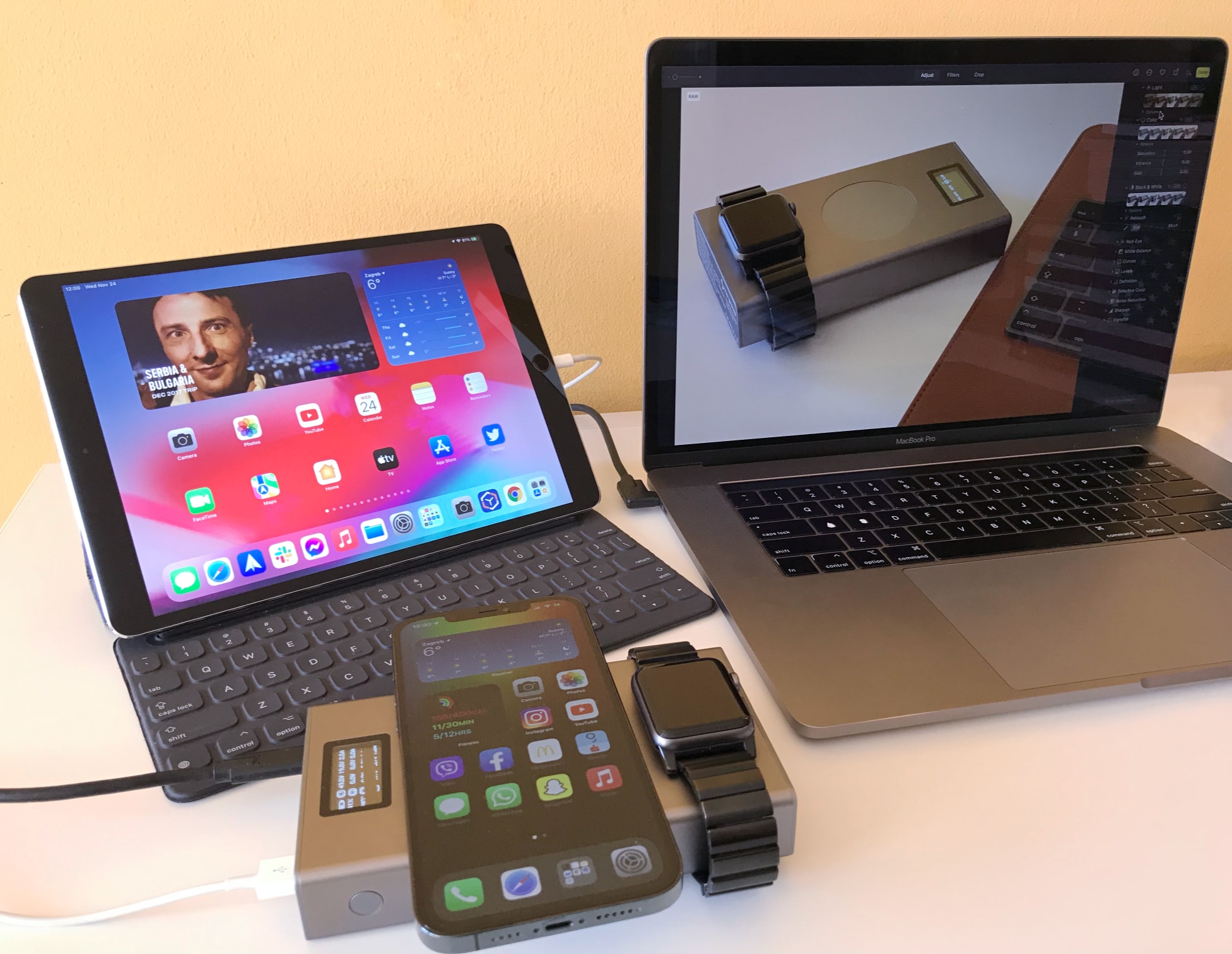 Are you a blogger who works from the beaches? A YouTube creator who doesn’t leave the house without a drone or GoPro in their backpack? A musician who roams between recording studios? A photographer? A video editor? None of the above?

To tell you the truth, it doesn’t really matter much who you are or what your daily routine is. As long as you own multiple devices that require charging throughout the day, Flash Pro Plus is a versatile, all-in-one charging appliance you’ve been looking for.

Flash Pro Plus: pricing and availability

The Flash Pro Plus portable power banks are available on Indiegogo InDemand. 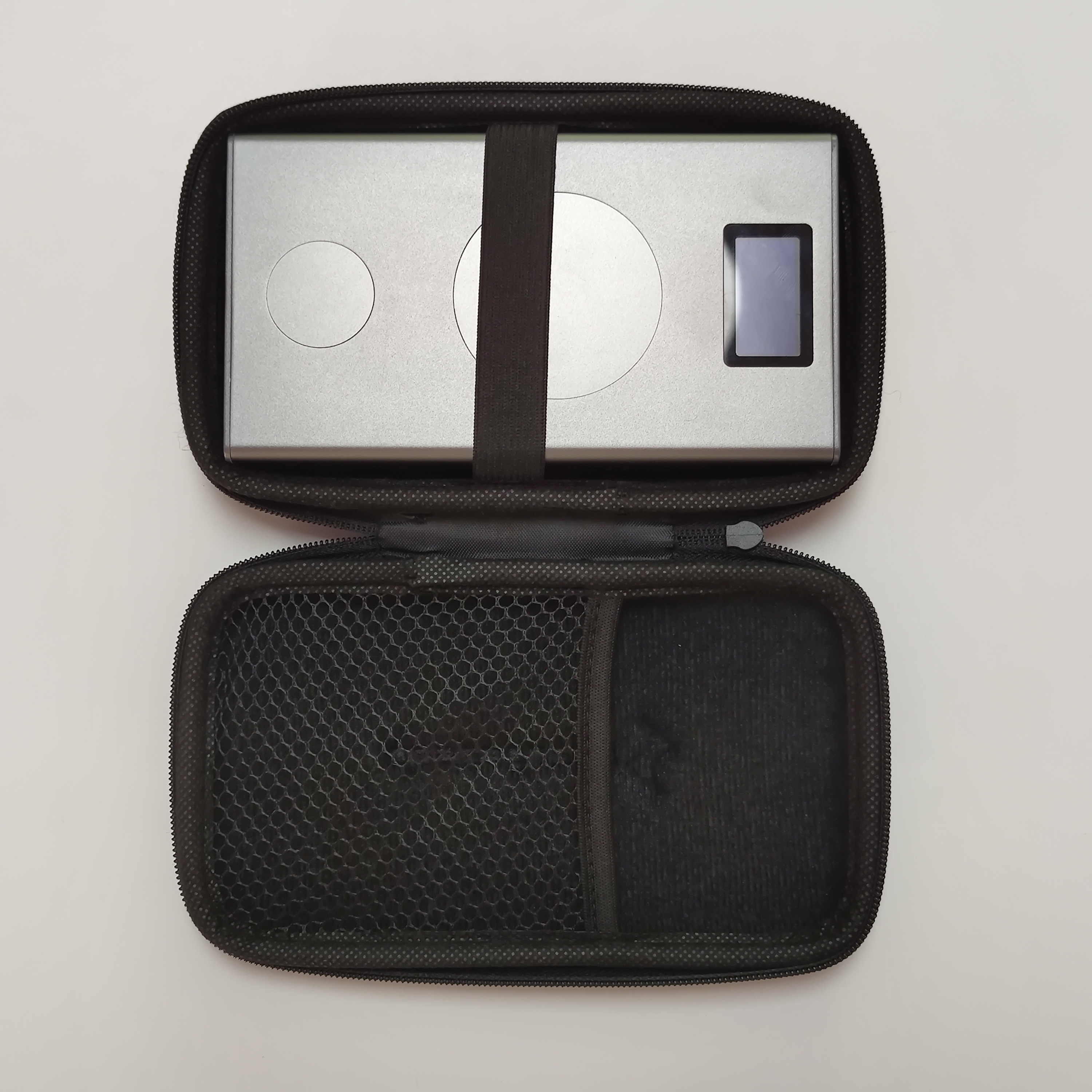 The accessory will be widely available to purchase on Chargeasap’s website from December. Pricing will start from $319/£237 for an Apple version of the accessory. Aside from Flash Pro Plus, Chargeasap also offers Flash Pro for Android users which lacks a pad for charging Apple Watch so it can charge up to five devices at once, not six.

That one will be available from December from $299/£222. As mentioned earlier, Flash Pro and Flash Pro Plus ship with a bonus hard carry case in the box, as pictured above.