One thing all iPhone users seem to agree about is that their privacy is very important to them. Regardless, we continue to witness apps overstepping their boundaries time and time again for what the developer’s deem a so-called “better user experience.”

Upon discovering that some apps were accessing the user’s Photo Library in the background without the user’s consent, iOS developer twotrees created and released a new free jailbreak tweak dubbed NoBackgroundPhotoAccess with the goal of thwarting this activity.

iPhone users can already control Photo Library access on a per-app basis from the Privacy settings of their device, but when you give any of your apps carte blanche over your Photo Library, they can then pretty much do whatever they want — especially if those apps have any malicious intent to snoop through your Photo Library in the background.

After installing NoBackgroundPhotoAccess, you not only stop this from happening, but you receive a notification when the tweak successfully blocks such activity. This is a win/win, as you not only keep your personal data safe from prying eyes, but you also receive some insight into the intrusive app that might be trying to snoop on you.

NoBackgroundPhotoAccess adds a simple preference pane to the Settings app post-installation where you can toggle the tweak on or off on demand: 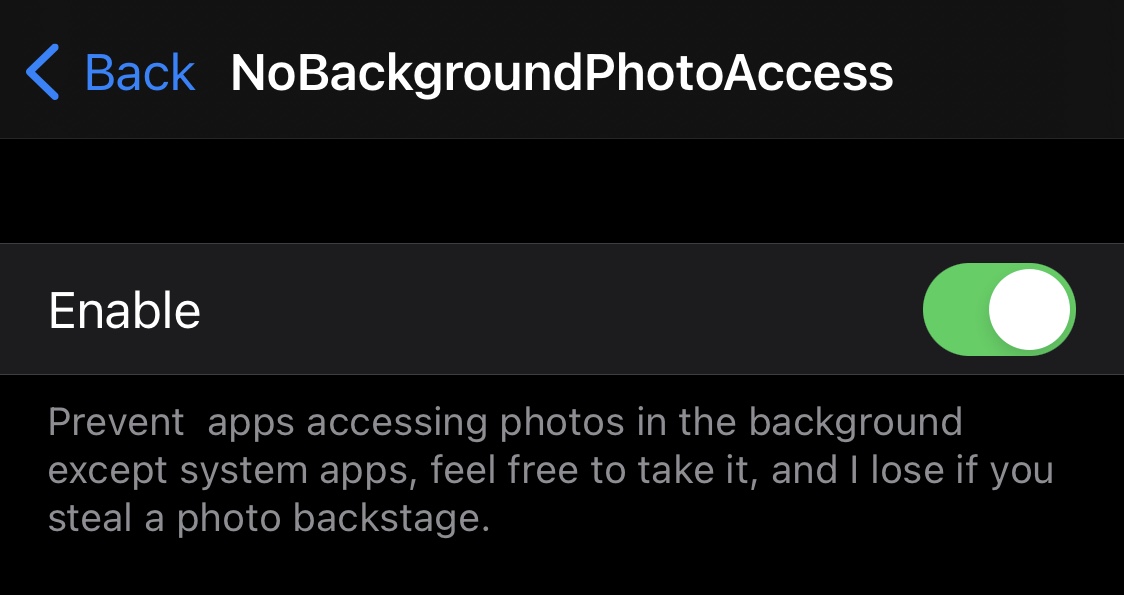 Those interested in boosting their handset’s Photo Library privacy with the new NoBackgroundPhotoAccess tweak can download it for free from the BigBoss repository via their favorite package manager app. The tweak is purported to support jailbroken iOS 10-13 devices and also appears to be open source on the developer’s GitHub page.

Will you be taking advantage of the NoBackgroundPhotoAccess tweak to shield your Photo Library from eyes that don’t belong in there, or are you content leaving yourself vulnerable to snooping? Be sure to leave a comment below with your opinion on the matter.