Apple remains the same company in the grand scheme of things, focusing almost entirely on its first-party ecosystem above all else. However, with some aspects of the business there is some branching out. For instance, Apple Music is not just an Apple-only experience, with a popular enough Android app out there in the world as well. And it looks like it’s coming soon to another platform as well.

As shared by folks on Reddit, and The Verge and Eurogamer, the Apple Music app has appeared on some consoles out in the wild. Not for anyone to actually download and use just yet, unfortunately. But, based on the reports, it appears the app is coming soon to Sony‘s PlayStation 5 home console.

Spotify, the leader in streaming music, has been an option on Sony’s console since its launch in late 2020. But, with the incoming arrival of Apple Music, PlayStation 5 owners will have another option to choose from. When Apple’s music streaming app might arrive, though, remains a mystery. 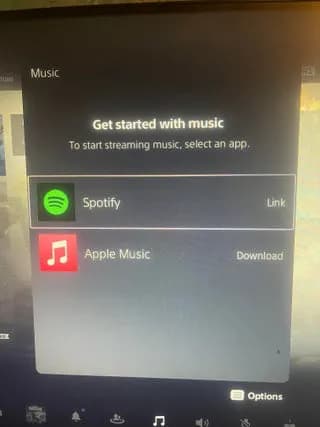 Here’s the setup: a user, who shared the above image on Reddit, apparently tried to sign into a new account on their PS5 and link that account to Spotify. The music menu included Spotify as usual, but it also included Apple Music. Apple’s music app didn’t work, though. A pop-up said, “This app is playable only on PS4,” which, as noted by Eurogamer, is apparently a standard error message when something isn’t available on the PS5. So not an indicator that Apple Music is available on the PlayStation 4 instead.

It appears the option has popped up for others, too, when setting up new accounts. However, others haven’t been able to reproduce the same.

As it stands, neither Apple nor Sony have confirmed that the Apple Music app is coming to the PlayStation 5. However, with the app popping up randomly for folks trying to set up new accounts, it certainly looks like that is indeed what’s happening.

We’ll just have to wait and see how it all pans out.