When you play games on your fully-loaded gaming PC, you expect your graphics card to crank out the highest graphics at the highest frame rates for the best aesthetics. This also means having a gaming display panel that supports those high frame rates.

When it comes to smartphones, users are less picky. But the Apple’s ProMotion displays promise up to 120 frames per second under certain circumstances. So is it too much to ask to take advantage of higher frame rates when available?

iOS developer PoomSmart doesn’t think so, and so a new and free jailbreak tweak called CAHighFPS has been released that lets users experience higher frame rates on current 60hz display handsets when certain CoreAnimation-supported apps or games would cap performance at a less desirable 30 frames per second. 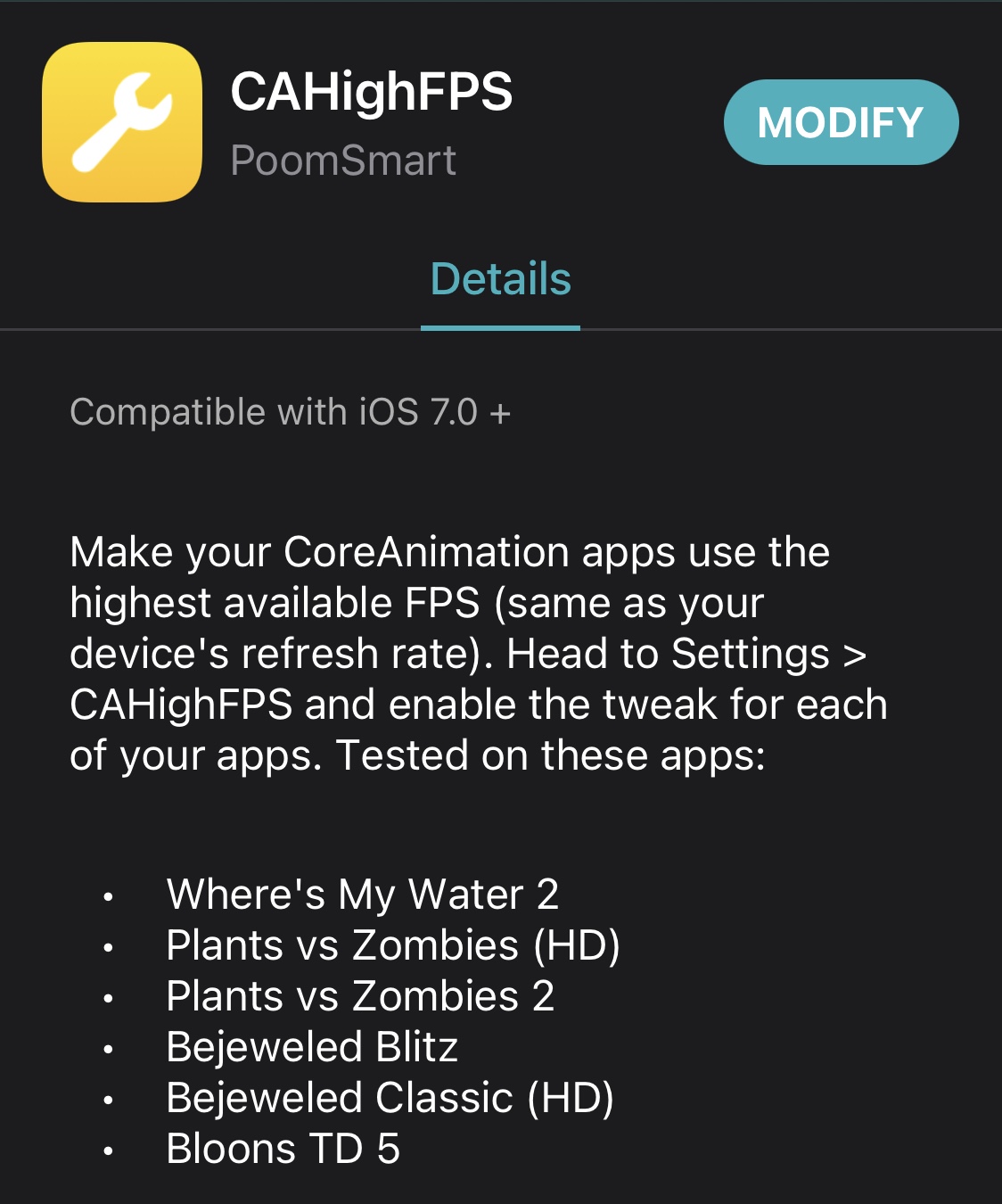 Once installed, CAHighFPS adds a dedicated preference pane to the Settings app where users can individually enable or disable the apps that they want to force the highest available frame rate for:

We had a chat with PoomSmart via Twitter to learn more, and learned that while most games are configured to operate at 60 frames per second for ideal viewing conditions, some CoreAnimation-supported apps and games still operate at a lower and less aesthetically pleasing 30 frames per second, such as Plants vs. Zombies 2.

According to the tweak depiction, CAHighFPS has been tested with a variety of different popular mobile games, including Where’s My Water 2, Plants vs. Zombies HD, Plants vs. Zombies 2, Bejeweled Blitz, Bejeweled Classic HD, and Bloons TD 5. It should also work with other apps that have been capped for one reason or another.

We also asked about the implications for Apple’s new iPhone 13 lineup with the 120hz ProMotion displays and whether they could take advantage of this tweak once jailbroken, and PoomSmart’s answer was cautious, yet optimistic. In any case, there’s no way to test at this time since a jailbreak for the iPhone 13 lineup doesn’t yet exist, so only time will tell.

Those interested in giving the new CAHighFPS tweak a try can download it for free from PoomSmart’s personal repository via their favorite package manager. All jailbroken iOS 7-14 devices are supported.

If you aren’t already taking advantage of PoomSmart’s personal repository, then you can add it to your package manager app of choice via the following URL:

Do you have any plans to download the CAHighFPS tweak, or are you already totally satisfied with the frame rates of the games you plan on your pwned devices? Let us know in the comments section down below.