Apple is not holding its own personalized advertising system to the same standard as developers, according to a new complaint to the French regulator CNIL, filed this morning.

Is Apple giving itself preferential treatment?

This deals with Personalized Advertising, a system feature that displays personalized ads to the user in the App Store, Apple News and the Stocks app. For clarity, this feature shouldn’t be confused with the upcoming App Tracking Transparency initiative coming with iOS 14.5.

This ad system is enabled by default, but Apple seems to have done little to disclose that fact to users in no ambiguous terms. According to the complaint obtained by Bloomberg News, customers are “insufficiently informed about the use and the processing of its personal data.”

France Digitale also wrote this in its complaint:

Apple keeps the right to choose who is a ‘partner’ and who is a ‘third party’ in an arbitrary manner, a quality which may change over time, without the user being informed of such a change.

The iPhone maker has fired back with the following statement:

The allegations in the complaint are patently false and will be seen for what they are, a poor attempt by those who track users to distract from their own actions and mislead regulators and policymakers. Transparency and control for the user are fundamental pillars of our privacy philosophy, which is why we’ve made App Tracking Transparency equally applicable to all developers including Apple. Privacy is built into the ads we sell on our platform with no tracking.

As mentioned, this shouldn’t be confused with the App Tracking Transparency feature that’s coming with the iOS 14.5 and iPadOS 14.5 software updates later this month.

Ad networks are in panic mode 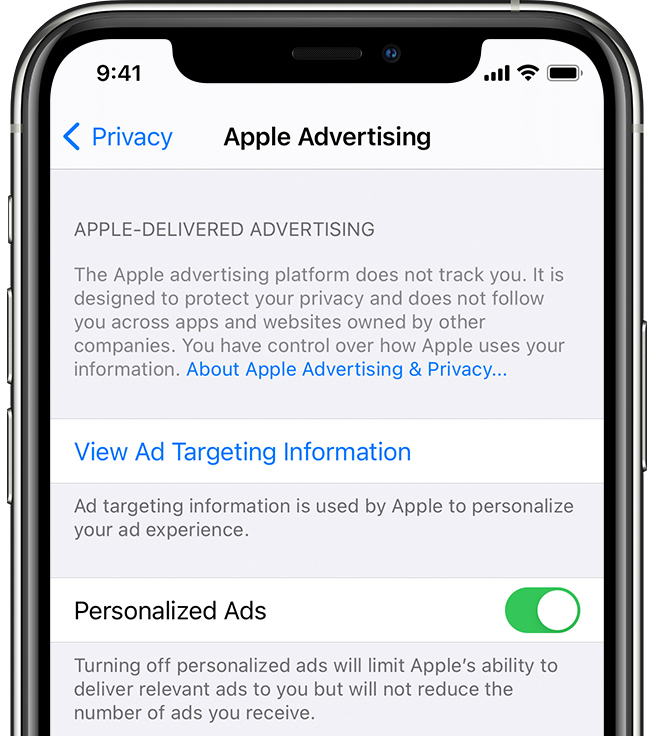 It remains to be seen who will prevail in this dubious case. For what it’s worth, it would appear that the ability of third-party ad networks, and the entire tracking industry for that matter, to track online users is going to take a hit when the new App Tracking Transparency comes out. The App Tracking Transparency feature has irked Facebook because it requires developers to obtain consent before tracking users across apps/websites to create advertising profiles.

→ How to stop Apple notifications for announcements, offers and more

That being said, Apple is probably telling the truth when it claims its personalized ads protect privacy and don’t identify individuals. This is hardly Apple’s only worry in terms of ads: The European Union has already filed a separate complaint against the company because it believes that Apple’s personalized ad system breaches GDPT because it’s on by default.