One of the strengths Apple promotes whenever it can is iOS adoption, and just how many devices out there in the wild are running the latest version of its mobile operating system.

The good news for Apple is that those numbers are typically very good. And the latest update on Apple’s part continues that trend. Apple launched iOS 14 to the public back in September. Now, according to the company, the mobile OS is now installed on upwards of 81 percent of iPhones that were launched in the last four years.

This is actually the first time Apple has published the adoption rate for iOS 14 since the release of the new software. 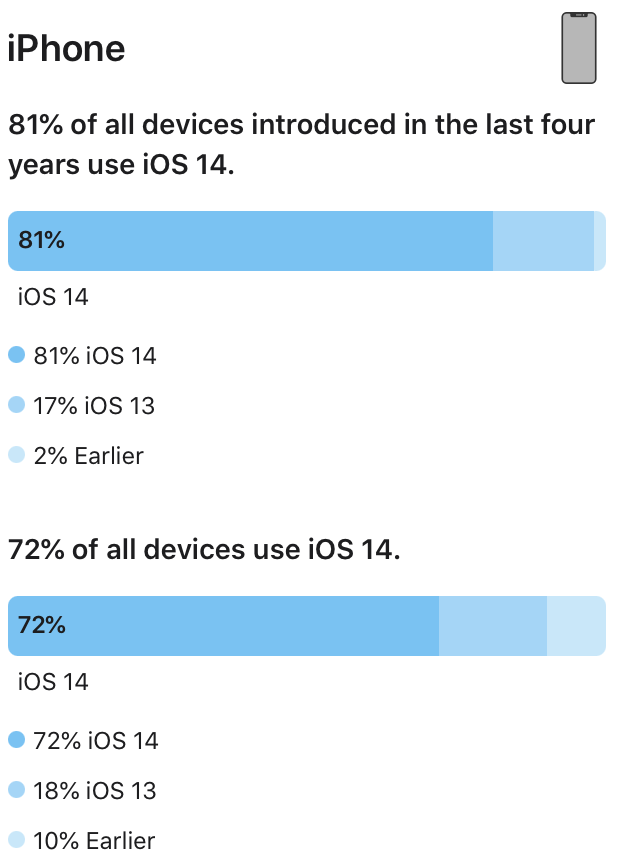 According to the data, as you can see from the image just above, 81% of iPhones launched in the last four years are running the latest version of iOS. Meanwhile, the number of iPhones running iOS 13 has dropped to just 17%. And “earlier” versions of the mobile OS are now down to just 2 percent.

Meanwhile, when we look at the wider world of iPhones, we see that 72% of all iPhones are running iOS 14. That’s probably the number Apple would lean into the most, because that means even older handsets than ones introduced in the last four years are also running the newest version of the OS. Still, 18 percent of all iPhones out there in the wild (registered by Apple) are running iOS 13, and 10% are running earlier versions of the operating system.

Things are just as rosy for the iPad, too.

So! Pretty impressive results for Apple. iOS 14 has been well-received up to this point, so it’s not all that surprising that folks out there in the wild are installing it.

What about you? Are all of your iOS and iPadOS devices running the most recent versions of their respective platforms?