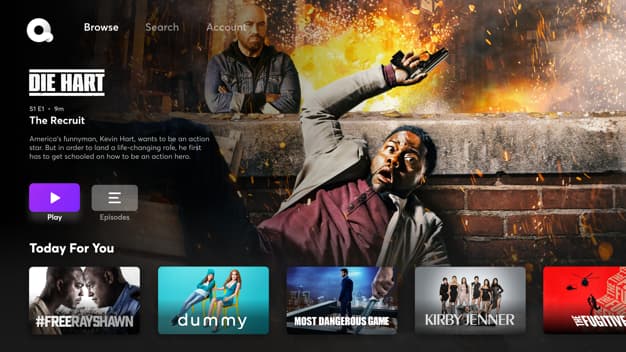 Quibi, short for “quick bites” of content, launched with a mobile-only focus earlier this year. However, that hasn’t really worked out for the streaming service up to this point.

Which is why the service has pivoted a bit since its launch back in April of this year. A week after the service launched, Quibi’s higher ups were already talking about supporting casting to TVs, which would let Quibi subscribers watch the content on their bigger screens. That support arrived with AirPlay integration in May, and Chromecast support launched in June.

Now, here we are in October and Quibi just arrived on set-top boxes and some streaming sticks, making it even easier to watch on the big screen(s) in your home without having to cast it from a device.

Quibi is now available for Apple TV from an official tvOS app, which is available to download today. As noted today by CNET, the rollout of an Apple TV app is accompanied by apps for Amazon Fire TV devices and Android TV as well.

Quibi is still in relatively rough waters. The streaming services executives have blamed the poor launch and adoption on the coronavirus pandemic, saying that, despite many people being stuck at home, watching content on their mobile devices wasn’t a top priority — mostly because they were stuck at home. As a result, a recent report indicated that co-founder Jeffrey Katzenberg has been making the rounds, trying to find someone, some company, to buy Quibi.

Quibi is free to download. However, it costs $4.99 per month to access the original content, and that’s with ads. You can choose to pay $7.99 per month if you want to remove the ads while you watch the original TV series and films, though.

Have you tried out Quibi? If so, do you like the content that’s available on the service?