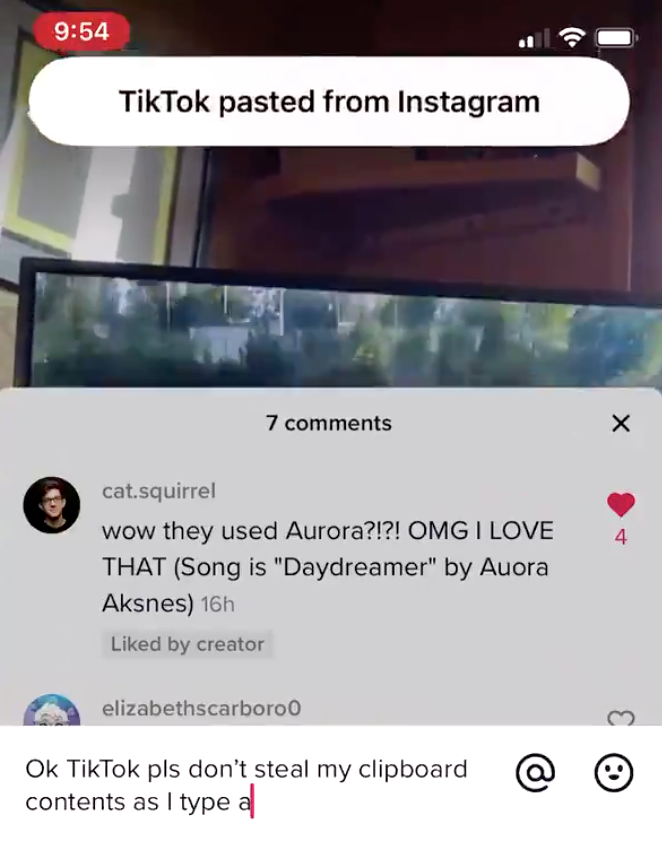 iOS and iPadOS 14 double down on privacy with a myriad of new features, including notifying you when an app or a widget access the system clipboard. Nest of all, this feature has already forced TikTok to promise to stop accessing the iOS clipboard after it was discovered that the app is grabbing clipboard content every few seconds.

Emojipedia’s Jeremy Burge has discovered that TikTok steals clipboard content on a regular basis. This also occurs even when the app is in the background. According to Burge’s video tweet out on Wednesday, TikTok appear to be grabbing the contents of the system clipboard every few seconds, including when she was typing in Instagram.

An update to TikTok which removes clipboard snooping is now live on the App Store.

A spokesperson defended the company’s practice in a statement to The Telegraph:

Following the beta release of ‌iOS 14‌ on June 22, users saw notifications while using a number of popular apps. For TikTok, this was triggered by a feature designed to identify repetitive, spammy behavior.

We have already submitted an updated version of the app to the App Store removing the anti-spam feature to eliminate any potential confusion. TikTok is committed to protecting users privacy and being transparent about how our app works.

I’m not buying TikTok’s explanation at all.

Okay so TikTok is grabbing the contents of my clipboard every 1-3 keystrokes. iOS 14 is snitching on it with the new paste notification pic.twitter.com/OSXP43t5SZ

From TikTok’s response, we still have no idea what they were doing with captured clipboard data from millions of its users. Is that used to gain insights? Does the data leave user devices? If so, has the data been re-sold to third parties for nefarious purposes?

We don’t know answers to any of those questions, not even if this feature has remained active in TikTok for Android, because the company refuses to be transparent even after being caught with its fingers in the cookie jar, which tells you a lot about their company values.

TikTok and other apps like Starbucks, Overstock and AccuWeather were doing this before.

TiKTok’s privacy-invading practices flew under the radar until iOS 14 came along with its clipboard monitoring, which vividly illustrates why we should make no assumptions whatsoever in terms of what apps do with our data.

The Telegraph said back in March that TikTok was doing this for some time, which prompted a reaction from TikTok developer ByteDance who said the company planned to end clipboard snooping “within a few weeks.”

TikTok is a major app, but that didn’t stop them from lying about ending clipboard snooping “within a few weeks.” They made that promise back in March and here we are nearing the end of June and we wouldn’t even know that TikTok’s clipboard access remains active had it not been for this particular feature in iOS 14.

And while some people continue to call Apple’s privacy efforts as pure marketing talk, the company is showing with each new software release that it plans on tightening user privacy further instead of relaxing it whereas many of its rivals base their business models on the wholesale collection of user data.

That’s especially true for the ad industry which won’t like how Safari in iOS 14, iPadOS 14 and macOS Big Sur transparently reveals to the user the extent of user tracking for each website.

Alex Hern, reporting for The Guardian:

Internet advertising firms are losing hundreds of millions of dollars following the introduction of a new privacy feature from Apple that prevents users from being tracked around the web.

Advertising technology firm Criteo, one of the largest in the industry, says that the Intelligent Tracking Prevention feature for Safari is likely to cut its 2018 revenue by more than a fifth compared to projections made before the feature was announced.

With annual revenue in 2016 topping $730 million, the overall cost of the privacy feature on just one company is likely to be in the hundreds of millions of dollars.

As John Gruber noted, the comment shows the kind of outsize influence that Safari enjoys because it only has a fifteen percent share of the global browser market yet was responsible to a 20+ percent drop in their revenue due to this new privacy-enhancing technique in Safari.

iOS 14 customers can also choose to share their approximate rather than accurate location on a per-app basis (great for, say, weather apps) and there are also new status bar and Control Center indicators for when an app is using the device’s camera or microphone.

Apple say privacy is a fundamental human right and on of its core values that permeates everything it does, and I think there’s no reason to doubt that. I want Apple to continue designing its products to protect my privacy and give me control over my information.

How about you? Is privacy when using digital devices at the top of your priorities? If so, has that been one of the deciding factors for you to stay within the Apple ecosystem?