The App Store is a vital element to Apple’s business, due in part because Apple leans into the digital storefront so heavily with all of the apps that are available for its iOS devices. And now the company has revealed just how much it has facilitated commerce growth in 2019.

On Monday, Apple issued a press release that proclaims the App Store ecosystem “facilitated over half a trillion dollars in commerce” through 2019. The company’s announcement arrives hot on the heels of a study done by the Analysis Group, a collective of independent economists. According to the results, in-app advertising, mobile commerce (m-commerce), and digital goods and service apps were at the top of the list when it comes to highest value categories.

The App Store is a place where innovators and dreamers can bring their ideas to life, and users can find safe and trusted tools to make their lives better,” said Tim Cook, Apple’s CEO. “In a challenging and unsettled time, the App Store provides enduring opportunities for entrepreneurship, health and well-being, education, and job creation, helping people adapt quickly to a changing world. We’re committed to doing even more to support and nurture the global App Store community — from one-developer shops in nearly every country to businesses that employ thousands of workers — as it continues to foster innovation, create jobs, and propel economic growth for the future.

Apple is usually quick to point out just how much money it has forked over to developers over the years. However, this study shows that’s just a fraction of the total when other, additional sources are tallied. That includes physical sales and additional services. The report says that because “Apple only receives a commission from the billings associated with digital goods and services, more than 85 percent of the $519 billion total accrues solely to third-party developers and businesses of all sizes”. 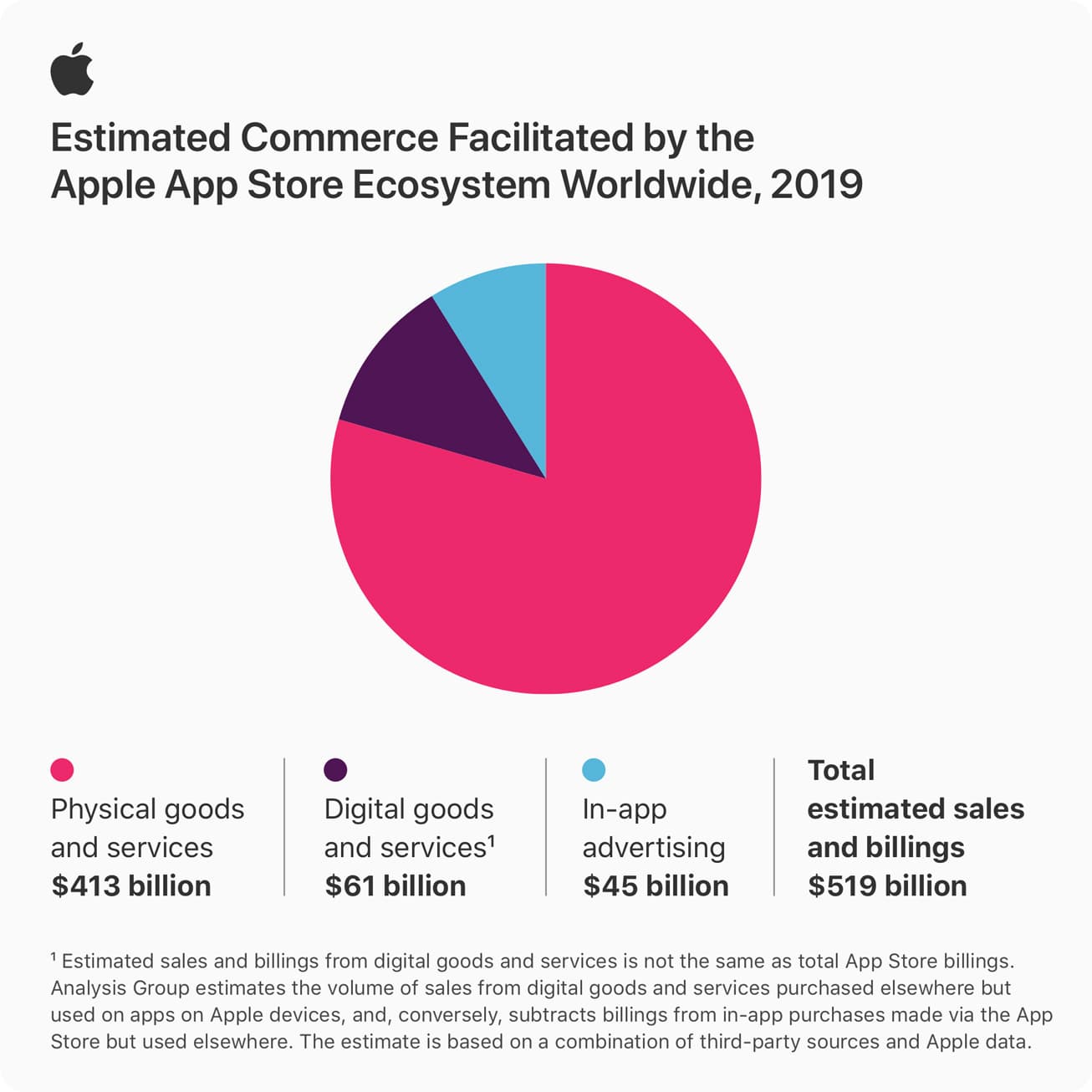 Of the $519 billion the App Store ecosystem supported in 2019, the study found that sales from physical goods and services accounted for the largest share, at $413 billion. Within that category, m-commerce apps generated the vast majority of sales, and of those, retail was the largest, at $268 billion. Retail apps include those that digitally represent brick-and-mortar stores such as Target and Best Buy, as well as virtual marketplaces that sell physical goods, such as Etsy, but do not include grocery delivery, which is its own category.
Other types of m-commerce apps were among the largest sources of sales from physical goods and services. Travel apps, including Expedia and United, accounted for $57 billion. Ride-hailing apps, including Uber and Lyft, comprised $40 billion in sales, and food delivery apps, including DoorDash and Grubhub, made up $31 billion.

This snapshot of the App Store ecosystem takes in more than just what Apple doles out. However, the press release also makes note of the fact that the coronavirus has changed the way people “live their lives”, and have adjusted to spending even more time on their mobile devices. Social apps especially are seeing even more attention in this day and age, along with education and business collaboration apps. The analysis shows that food and grocery delivery apps are also seeing a huge boost right now as well.
We’re probably going to hear more about the App Store and it’s impact on developers next week during Apple’s all-online Worldwide Developers Conference which starts on Monday, June 22, 2020.
Tags App Store Apple Developer Developers News
Featured Stories