As you use apps on your iPhone or iPad, your App Switcher begins to accumulate a running history of recently used apps in the order you’ve use them. These apps are suspended in a frozen state to make multitasking more efficient, but even suspended apps use some of your handset’s RAM to make relaunching them faster.

iOS automatically manages your device’s memory to ensure smooth operation, but if you’re a RAM nut then you may habitually force-close all your App Switcher’s suspended apps when you finish using your device. QuitAll is a newly released and free jailbreak tweak by iOS developer Dave van Wijk that lets you do this in one fell swoop as opposed to swiping up on each of the App Switcher’s individual app preview cards.

As shown in the screenshot example above, QuitAll appeases the minimalists by incorporating a native-esque ‘Clear’ button at the top-right-hand corner of the App Switcher interface. Merely tapping on this button force-closes all apps that appear in your App Switcher and frees up a large chunk of RAM in the process.

Once installed, QuitAll adds a preference pane to the Settings app where you can configure a few options: 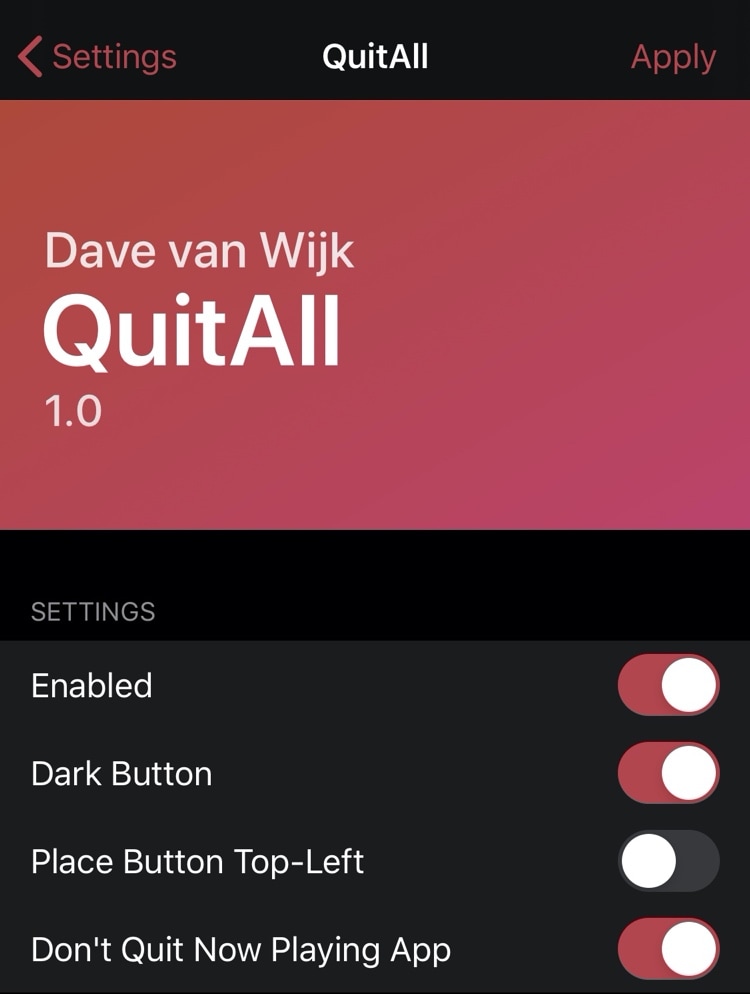 The developer includes an ‘Apply’ button at the right-right of the preference pane to help you save any changes you make to the tweak’s settings.

It’s worth noting that we appreciate the tweak’s final option – Don’t Quit Now Playing App. This is especially useful if you’re listening to music and you happen to tap on the ‘Clear’ button while doing so. It effectively prevents you from interrupting your song-listening experience, and we felt that this was a nice touch.

As we noted earlier, force-closing apps isn’t necessary because iOS automatically manages your memory for you – it offloads apps that weren’t used as recently to make room for more resource-intensive apps. But if you still insist on clearing the apps yourself, then QuitAll is one of the best ways we’ve seen to do this thus far.

Those interested in downloading QuitAll can download it for free from the Chariz repository via their preferred package manager. QuitAll supports jailbroken iOS 13 devices and is open source on the developer’s GitHub page.

Will you be downloading QuitAll? Tell us why or why not in the comments section below.