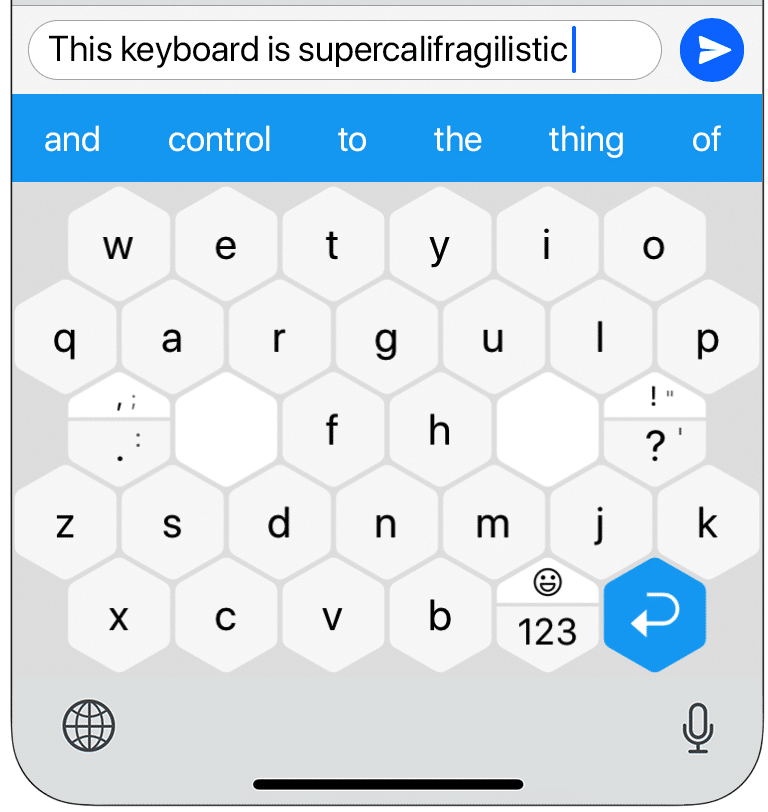 What if someone made a keyboard app with a focus on reducing those annoying typos?

Enter Typewise, an upcoming software keyboard for iPhone that uses 70 percent larger, honeycomb-shaped keys to reduce typos by as much as eighty percent or more. You can read more about this in their Medium post, including results from a large-scale scientific study.

Created by co-founders David Eberle and Janis Berneket, this promising app aims to make it easy for customers to type without any hassle and frustration, and with some interesting under-the-hood optimizations going on. For instance, when you modify an autocorrection, Typewise learns from that. It also looks at where exactly you hit the keys to optimize further.

According to a study by Cambridge University, every fifth word typed on a smartphone keyboard contains typos. The Typewise Keyboard app aims to change that.

Here’s how they’re pitching it:

The keyboard is the most used interface, but it hasn’t really changed since it was designed for the typewriter over 140 years ago. While this is fine for ten-finger typing, for us it simply doesn’t work well on a small touch screen. That’s why we designed a keyboard specifically for smartphones, with larger keys that are easy to hit and swipe gestures that make use of the possibilities of touch screens.

The app provides advanced functionality like the ability to swipe to delete, tap to modify auto-corrections, long-tap to move the cursor and so forth. Also cool: there’s no need to switch between your selected languages.

Unlike third-party keyboard apps such as Google’s Gboard or Microsoft’s Swiftkey, Typewise doesn’t send anything to the cloud. The app runs completely offline, guaranteeing privacy.

This interesting project was actually born out of WRIO Keyboard, the team’s previous keyboard software launched three years ago as a downloadable prototype. The response has been very positive, both in the US and internationally. As an example, the app reached the third spot on German App Store while filing as the most downloaded app in Switzerland.

They’ve completely redesigned and rechristened that app as “Typewise Keyboard”, which is now in beta. Feel free to sign up via the official website ahead of mid-December launch.

What do you think about Typewise Keyboard?