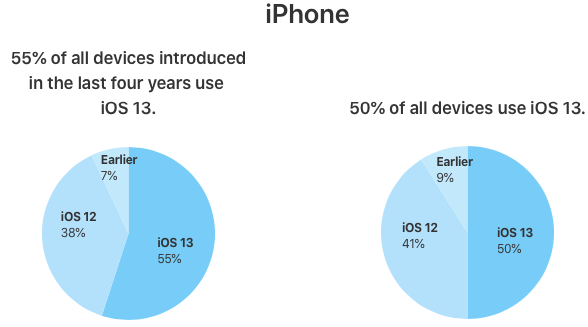 Apple yesterday released first official adoption rate figures for iOS 13 since its September 19 debut, revealing that the update is now installed on fifty percent of all iPhones out there.

According to an update on the App Store Developers dashboard, the mobile operating system is found on 55 percent of all iPhone models introduced in the past four years. Those figures are based on measuring App Store activity on Tuesday, October 15, 2019.

“The pace puts ‌iOS 13‌ approximately on par with iOS 12 adoption last year which hit 53 percent of active devices in a slightly shorter timeframe and a different device breakdown,” notes MacRumors. Looking at our own analytics, about 67 percent of readers visiting our mobile site site have upgraded to iOS 13, or more than two-thirds of iDownloadBlog’s mobile users. 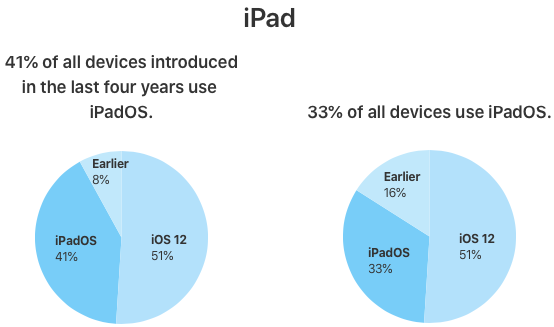 The Cupertino technology giant has also provided a separate pair of stats for iPadOS, which was released for public consumption five days later than iOS 13, on September 24.

According to the company, iPadOS is currently powering 41 percent of the iPad models released in the past four years. As for all active iPad models, 33 percent, or one-third of all active Apple tablets out there, are now bering powered by the latest iPadOS software.

What do you make of the above iOS 13 and iPadOS adoption rates?