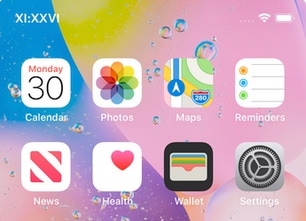 Your iPhone’s Status Bar provides a convenient way to check the time no matter what you might be doing on your device, but a digital time display isn’t everyone’s forte.

For those who demand a fancier Status Bar time display, we recommend checking out a newly released and free jailbreak tweak dubbed Roman by iOS developer Blake Boxberger.

As shown in the screenshot example above, Roman replaces the Status Bar’s standard digital time display with roman numerals.

Roman numerals are an acquired taste and might seem like an unusual choice for the Status Bar in this particular situation, but for those who look at them on a daily basis by way of their wristwatch or Apple Watch, reading their time in roman numerals shouldn’t add too much extra effort or strain to the task.

You won’t find any options to configure for Roman after installing the tweak, but this isn’t given surprising given just how simple the tweak is by nature.

It’s worth noting that Roman was designed to work with notched handsets such as the iPhone X, XR, XS, and XS Max, so we can only advise trying this tweak if you have one of those listed devices.

Roman is available as a free download from the Dynastic Repo repository in Cydia or Sileo and works on jailbroken iOS 11 and 12 devices.

Do you dig the idea of using roman numerals in the Status Bar, or will you stick to the usual digital time display? Let us know in the comments section below.