Scrolling a loooooong Safari webpage, a Pages document, or other very tall pieces of content involves multiple swipes and gets tiring. Some apps like Photos let you double-tap a tab to quickly scroll to the bottom of the list, but there’s a better way to use long list views on iPhone and iPad, one that’s a tremendous time saver, and iDB tells you all about it.

The nifty little improvement described below is part of the enhancements introduced in iOS 13 and iPadOS. These continue to work in all future versions, including iOS 16.

Follow along with iDownloadBlog’s quick tutorial as we show you how you can scroll long lists and scrub the entire scroll view in one simple motion, without the need for multiple swipes.

How to scroll faster on iPhone and iPad

You know how iOS 13 and iPadOS let you move the cursor by grabbing it with your finger and moving it to a new location? You can do that with the system scroller too in apps like Safari, Notes, Photos, etc. In other words, you scroll faster on your iPhone or iPad by holding down on the scroller for a moment and then dragging it up or down.

For those wondering, it’s a system-wide gesture.

You must first trigger the scroll bar by scrolling some, then touch and hold the scroll bar itself a bit. After that, drag it to quickly scroll down (or scroll up). 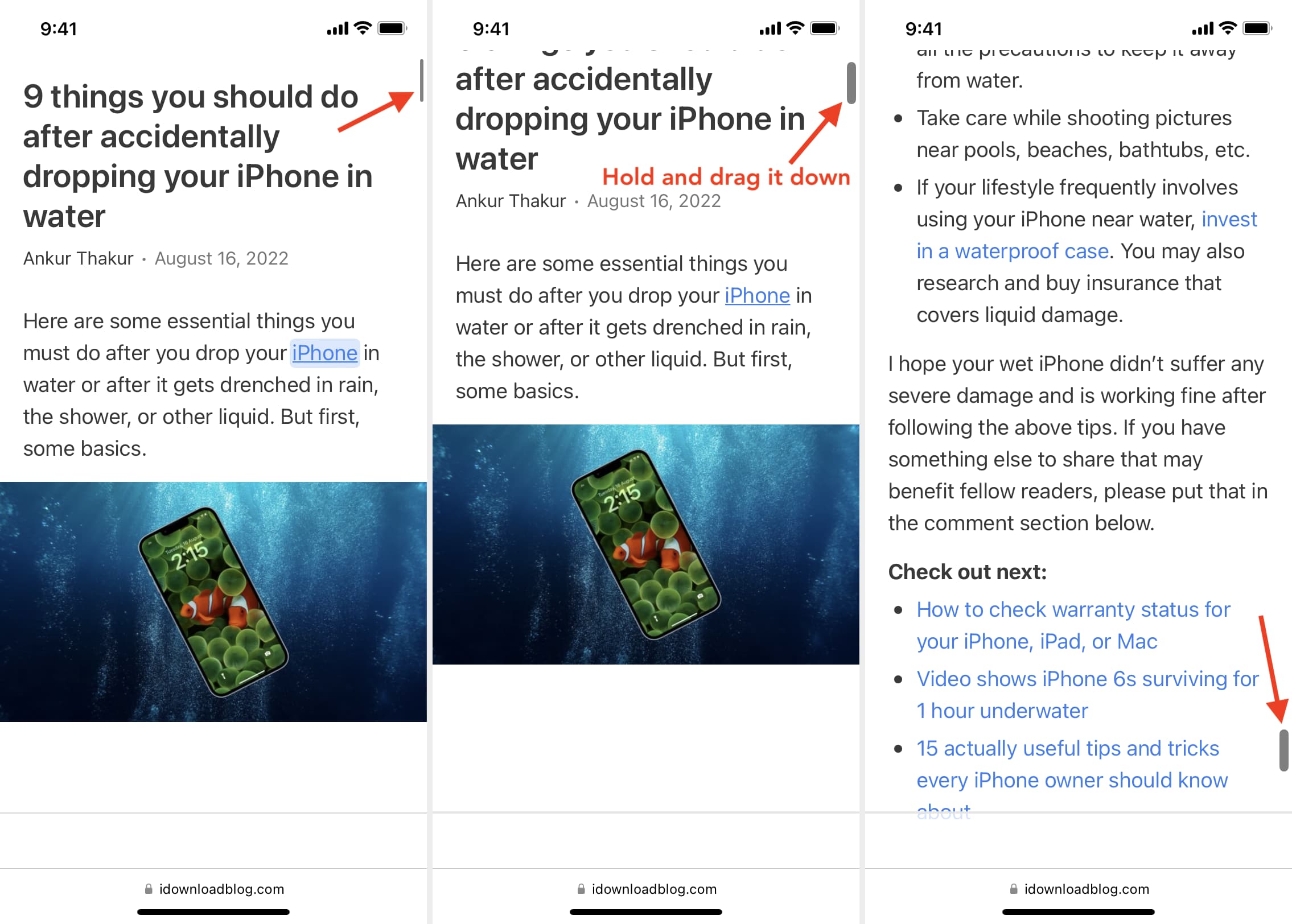 To be fair, iOS could make use of a macOS setting letting it automatically show scroll bars in apps always, when scrolling, or automatically based on mouse/trackpad presence.

In typical Apple fashion, the scroller has momentum so you can flick it and jam to the end really really fast. And if your device has a Taptic Engine, you’ll feel vibratory feedback when you grab the scroller. On devices without a Taptic Engine, like iPad, you won’t feel haptic clicks.

No matter the amount of content, this tremendously useful gesture lets you scrub the entire scroll view in one swoop motion, which is really sweet. The more content there is in the scroll view, the faster it scrolls when you move the finger up or down, and vice versa. As Irish developer Steve Troughton-Smith noted, it makes scrubbing through thousands of tweets (or photos, tall webpages, and so forth — you get the idea) really effortless and easy.

And as before, you have the usual tap on the top of the screen to instantly go to the beginning of a document, page, or screen.