Piggy-backing on recent complaints accusing Apple’s application bazaar of anticompetitive practices, the Wall Street Journal today alleged that the Cupertino tech giant consistently ranks its own apps above those from rivals in App Store search result rankings in an effort to thwart competition. Apple’s denied the report, arguing that all App Store apps are algorithmically ranked based on machine learning, past consumer preferences and other signals.

The company’s apps ranked first in more than 60 percent of basic searches, such as for ‘maps,’ the analysis showed. Apple apps that generate revenue through subscriptions or sales, like Music or Books, showed up first in 95 percent of searches related to those apps. Apple tells developers that downloads, user reviews and ratings are factors that influence search results. Yet more than two dozen of Apple’s apps come pre-installed on iPhones and are shielded from reviews and ratings.

Aside from “music” and “maps”, searches for “audiobooks” and other categories also rank Apple apps first, the report adds.

The WSJ tested about 40 of Apple’s apps, looking at how they ranked in App Store based on statistics provided by App Annie, a third-party analytics firm. Author Tripp Mickle says he used six iPhones (three were personalized and three were unattached to a specific owner) to conduct about 600 searches with popular keywords for each app category to see if an Apple app surfaced first. Searches excluded Apple apps that weren’t discoverable in the App Store such as Safari, as well as apps specific to Apple products such as Apple Support.

Apple’s apps that generate sales for the company appear more often at No. 1 than its productivity and utility apps, the Journal found in its tests conducted in mid-June. For example, searches for keywords in categories related to the Apple TV app—’videos, ‘TV’ and ‘movies’—were led by both Apple TV and iTunes Store, apps that offer subscriptions and sales of video content.

The analysis relied on terms from AppTweak, which suggests keywords to help developers optimize their search results. In the map category, WSJ tested “maps”, “directions” and “navigation”.

Many common searches yielded multiple Apple apps above competitors. A search for ‘maps’ offered Apple’s Maps first, followed by two other Apple apps: Find My iPhone and Indoor Survey. The more widely used Google Maps came up fourth with more than 2 million reviews and a 4.7 rating. It was followed by Google’s Waze, which had more than 1 million reviews and a 4.8 rating. Apple’s Maps also came up first in searches for ‘navigation’ and ‘directions.’

Indoor Survey, used by businesses to map an indoor space, was the only Apple app of the three with a rating—seven reviews for a 3.9 rating.

A company spokesman said Apple often surfaces apps associated with one developer in bundles. Because this appeared to be disfavoring others, Apple said it is no longer applying this technique to its own apps. The company began phasing out this practice a year ago, a spokesman said.

In a search for ‘spreadsheet’, Google Sheets came up first, while Apple’s competitor, Numbers, appeared eighth. Its pre-installed Reminders app didn’t show up in the top 10 for searches for ‘to do lis’ or ‘to do’.

Non-discoverable Apple apps on App Store, like Camera and Safari, were excluded from the report. Some apps tied to Apple’s operations, such as Apple Support and Apple Events, were also excluded. You should take the results with a pinch of salt because App Annie can only collect data from third-party iOS apps which use its analytics platfor. 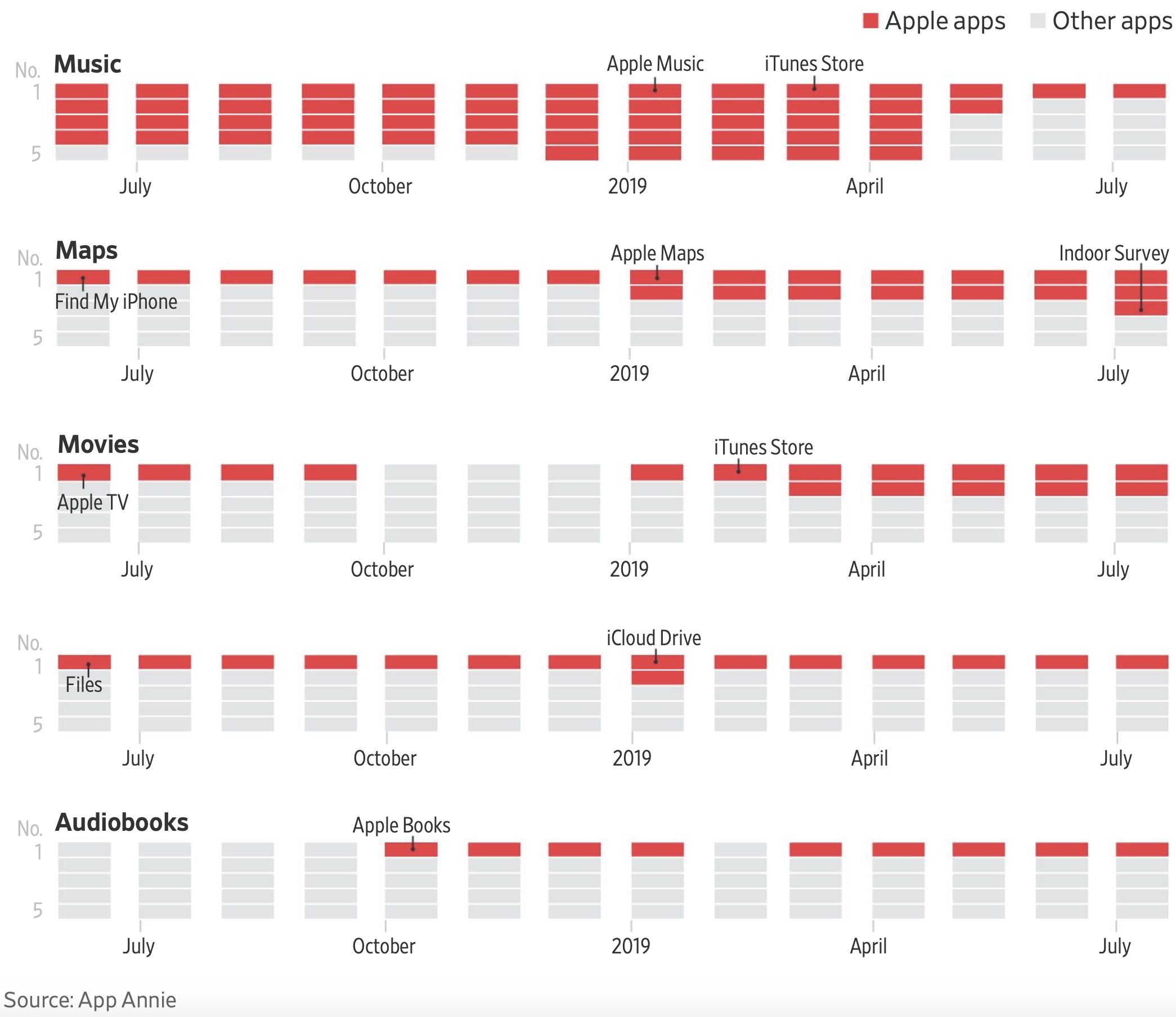 The iPhone maker explained it conducted its own tests in response to the Journal’s questions. Some searches yielded different results in which their apps didn’t rank first, a spokesman said. The Cupertino tech giant says most App Store searches are for exact app titles and that it is built to produce those results. Here’s the full statement from Apple, in which it basically argues that the App Store ranking algorithm doesn’t give own products an advantage.

Apple customers have a very strong connection to our products and many of them use search as a way to find and open their apps. This customer usage is the reason Apple has strong rankings in search, and it’s the same reason Uber, Microsoft and so many others often have high rankings as well.

Audiobooks.com, an RBmedia company, largely held the No. 1 ranking in ‘audiobooks’ searches in the App Store for nearly two years. Then last September it was unseated by Apple Books. The Apple app had only recently begun marketing audiobooks directly for the first time.

‘It was literally overnight,’ said Ian Small, Audiobooks.com’s general manager. He said the change triggered a 25 percent decline in Audiobooks.com’s daily app downloads. The app at the time had 35,000 customer reviews and a 4.8 on the App Store’s 5-star ranking. The preinstalled Apple Books app, with no reviews or ratings, has since ranked No. 1 in searches for ‘audiobooks’” It also ranks first in searches for ‘books’ and ‘reader.’

Apple says the No. 1 position for Books in a ‘books’ search is reasonable, since it is an exact name match. The app was also first for ‘audiobooks’ because of ‘user behavior data’ and the inclusion of ‘audiobooks’ as a keyword associated with the app, a spokesman said.

But how does the ranking algorithm work? 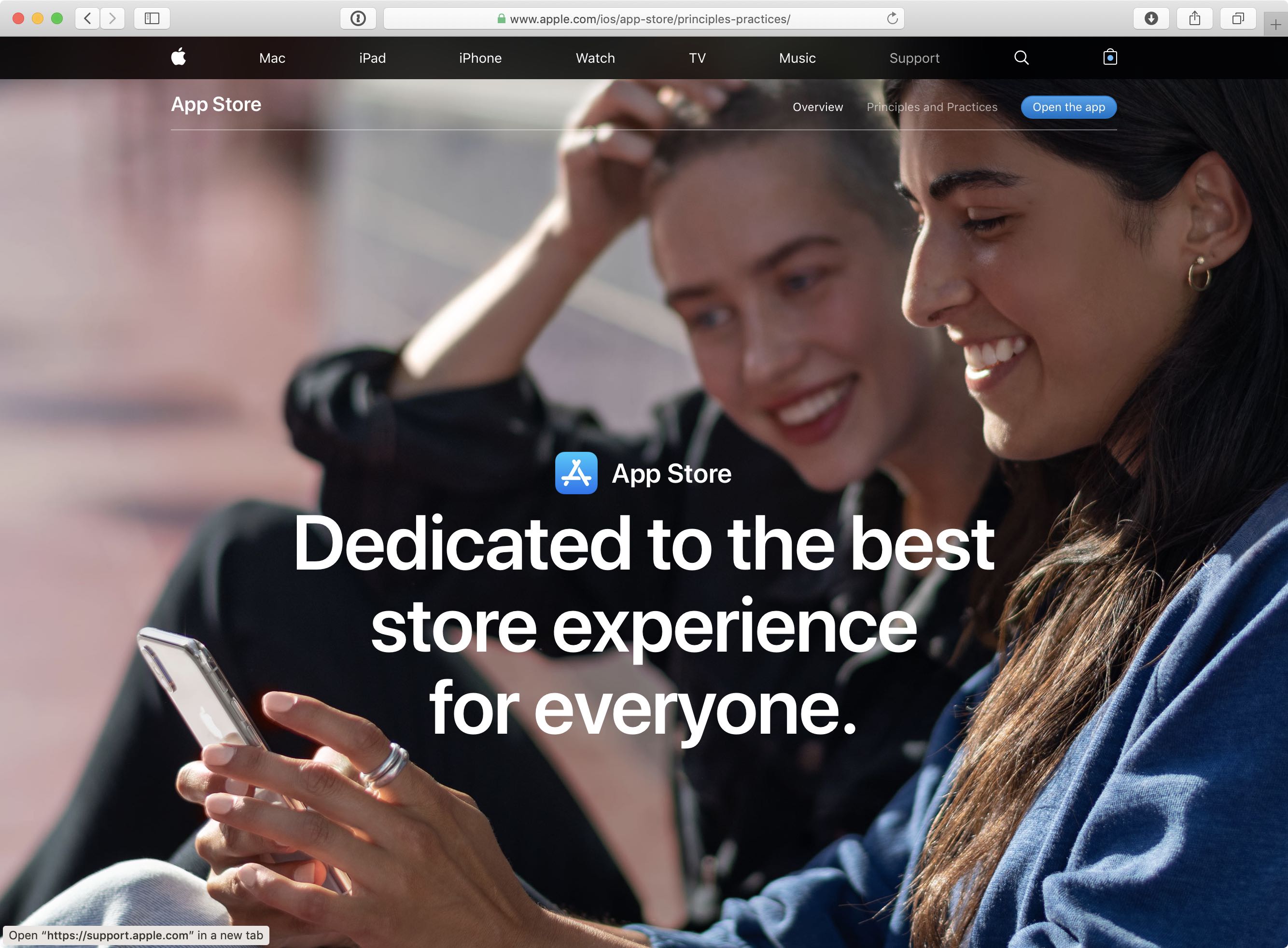 Apple says it uses 42 factors to determine where apps rank in search but keeps the formula secret to maintain a level playing field for developers and prevent the manipulation of results. The four factors that most influence the rankings are downloads, ratings, relevance and user behavior according to the company.

The algorithm works the same for all apps, including Apple’s own.

And as an Apple spokesman clarified in a statement to the paper, user behavior includes the amount of times users select an app after a query and also download it. Curiously, the Cupertino company says App Store searches lead to 65 percent of all app downloads.

Let us know by sharing a comment down below!