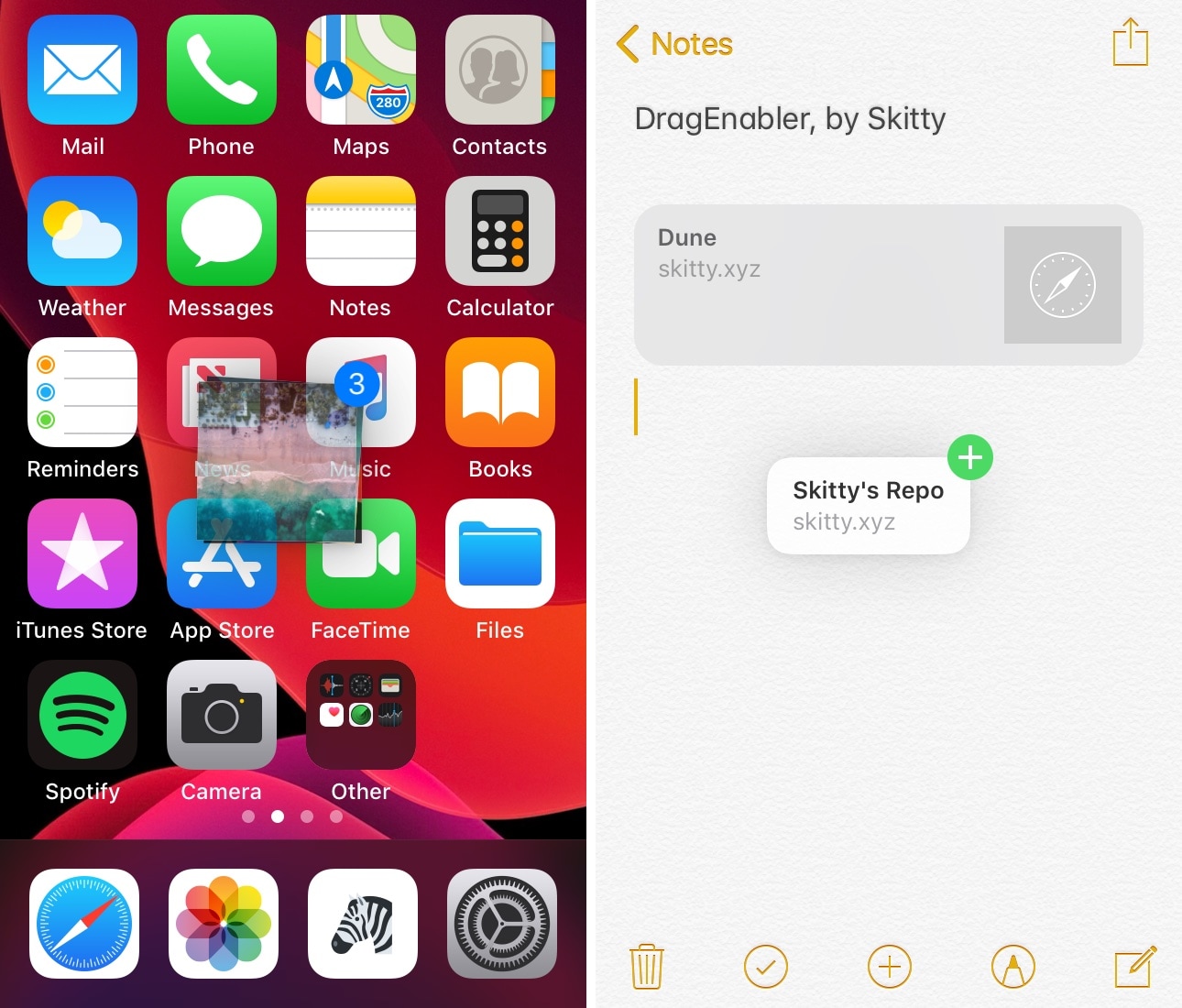 iPad users have long been able to enjoy multitasking-centric features such as Drag and Drop and multi-window interfaces, but iPhone users have been somewhat unlucky in this department, mostly because Apple limits these features to the iPad since it’s marketed as a mobile productivity device.

If you’re jailbroken, however, then you don’t need to play by these asinine limitations. A newly-released and free jailbreak tweak dubbed DragEnabler by iOS developer Skitty permits iPad-like drag and drop functionality on unsupported devices, including the iPhone and iPod touch.

In the screenshot examples above, you’ll discern a few examples of drag and drop working on an iPhone. This feature is particularly useful for dragging images or links from one app to another, and if you’re in the Notes app, you can drop items in the note interface to save them for later.

Drag and Drop functionality will also work in other applications, such as:

Once installed, DragEnabler puts a preference pane in the Settings app where you can toggle the tweak on or off on demand:

The developer also provides a Respring button at the top-right of the interface so that you can save any changes you make when turning the tweak on or off.

I’ve always been a huge fan of jailbreak tweaks that unlock the full potential of Apple’s devices by bringing native features from one device to an unsupported one, and for that reason, I am excited to recommend DragEnabler to my fellow jailbreakers.

Those interested in trying DragEnabler can download it for free from Skitty’s personal repository in Cydia or Sileo. If you aren’t already using Skitty’s repository, then you can add it to your package manager of choice by using the following URL:

Note: Another jailbreak tweak of similar nature called Dragger was also released in the Packix repository over the weekend. It was not available at the time we drafted this post. It’s worth noting that DragEnabler is free, while Dragger costs $1.50. Both tweaks should be somewhat comparable given their common goal, but the $0.00 price tag of DragEnabler is tough to argue with.

DragEnabler works with all jailbroken iOS 11 and 12 devices and the source code is available on the developer’s GitHub repository for those who might be interested in learning more about what makes the tweak tick.

Will you be augmenting your iPhone with DragEnabler? Let us know in the comments section below.