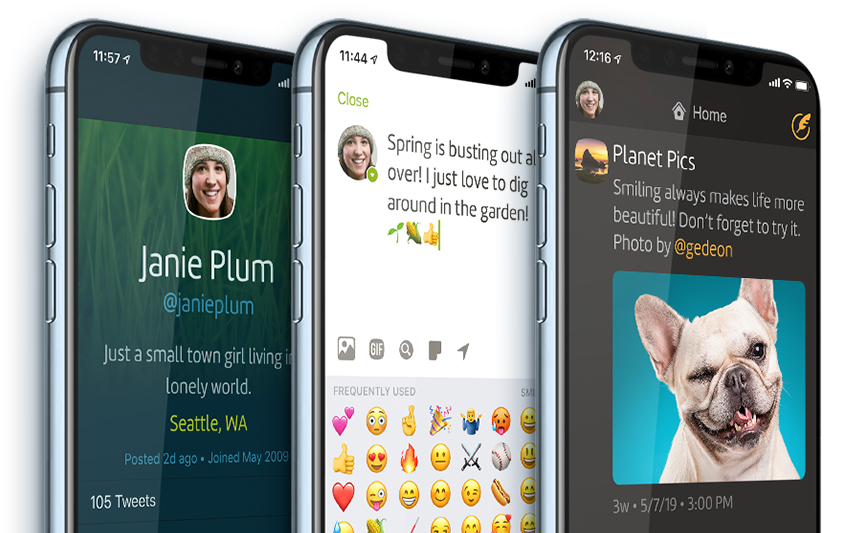 Twitterrific, The Iconfactory’s venerable Twitter app, first launched back in 2008. Today, it was bumped to version 6.0 on App Store. Twitterrific 6.0 delivers a bunch of new features and improvements along with a change of business model that now embraces subscriptions.

Representing the next stage in the lifecycle of Twitterrific, Twitterrific 6.0 delivers a ton of great new stuff including Giphy integration, the option to display full, auto-playing media in the timeline, a bunch of various new icons and themes, an improved attachment preview and more.

Visually, the apps is more polished than ever before with its precise typography, rounded panels and other design changes. Twitterrific users now get three new app icons to boot and five new themes on top of the existing icons and themes from the previous versions.

Inline videos and GIFs now play automatically as your scroll through your timeline. You can, of course, disable that behavior in settings to minimize distractions or perhaps save some cellular data when using the app on the go. Videos auto-play in silent mode. With a single tap, you can view the media in a much-improved full-screen browser and hear the accompanying audio.

Giphy integration lets you search for the right GIF that’ll drive your point home from the compose sheet, which is super nice. If you use Twitter’s latest quoted tweet format with media, you’ll be pleased to learn that Twitterrific 6.0 fully supports that Twitter feature, too.

Image uploads can now have optional accessibility descriptions and the images you see in your timeline are rendered in their original aspect ratio rather than appear cropped. The app even uses facial recognition to keep subject heads visible when uploading a multi-image tweet.

The Iconfactory has published a cool Twitterrific history timeline as infographic on its website.

The app is available as an ad-supported download. No features are locked or restricted in the free version so you can try everything without paying anything. Banner ads appear at the top of your timeline and you’ll also see subscription reminders but that’s pretty much it.

To get rid of ads, you can subscribe for one buck per month or ten bucks per year, a savings of two bucks per annum. If you loathe recurring subscriptions, you can upgrade to the ad-free experience in Twitterrific 6.0 with a one-time $30 purchase.

To put that in context, the previous version was also available as an ad-supported free download, but upgrading to the ad-free experience was an affordable one-time $5 purchase.

The substantial price hike for Twitterrific 6 compared to version 5 is an ambitious reworking of the app’s business model, and will undoubtedly anger some people. If you are just a casual Twitter user, you are unlikely to subscribe or pay $30 for Twitterrific. The company is obviously betting that their base of devoted and dedicated users is large enough to generate a sustainable revenue stream, topped up by the banner ad revenue of free customers using the app.

As for the existing Twitterrific 5 customers, The Iconfactory has said they will get the full ad-free benefits of Twitterrific 6.0 for up to six months from their last purchase date. After that, the app will nudge them to upgrade to get rid of advertising.

For the full details on the purchase policy, be sure to read The Iconfactory’ support document.

Here’s everything new, fixed and improved in Twitterrific 6.0.

The developers have cautioned that upgrading your copy of the app from a prior version to Twitterrific 6.0 may result in previously read messages and tweets being marked as unread, which is a known bug. Also, it’s worth reiterating that Twitterrific no longer supports Tweet Marker since that service is shutting down.