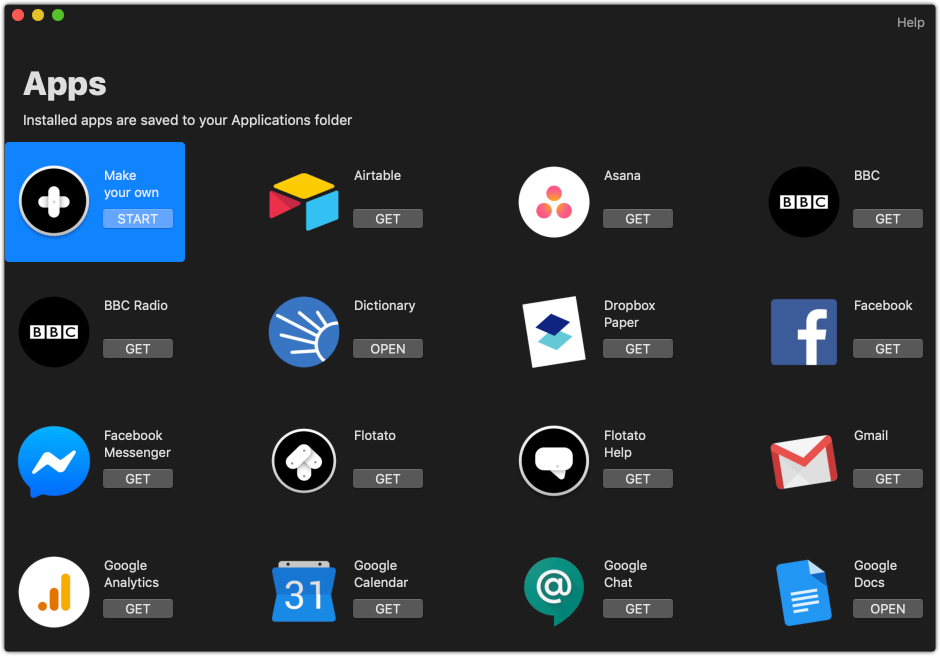 If you find yourself using a lot of tabs in Safari, Chrome, or Firefox, but have been looking for a potentially better option, a new app might do the trick. It’s a quick and easy way to use web apps on your Mac without having to rely on a bunch of tabs in your web browser of choice.

Dieter Bohn at The Verge has a nice look at an app called Flotato. This is an interesting way to use web apps on your Mac, the type of app you might traditionally use in your web browser. That includes things like Twitter, Instagram, and maybe even Slack or other services. Flotato is a lightweight and easy to use, and it’s designed to relieve some of the stress off your browser.

Flotato takes a web app and separates it from the tab, creating its own separate floating window. Launching the Mac app for the first time will show you a range of web apps you can launch just by clicking the “get” option. Once you select that, Flotato will then launch an app for that option in your Applications folder. Selecting the app in your Applications folder will open it, allow you to log in, and then launch a window for you to interact with.

To make a new Flotato app, you literally duplicate the Flotato app in the Mac’s Finder and rename that copy. So instead of using Flotato’s launcher, you can just make your own. When you open the app you’ve renamed, Flotato takes a guess at what webpage you want to open based on the app’s name, and it opens it. (You can manually set it in preferences if you need.) It’s just a super clever way to make new web apps, and it’s much simpler than other methods.

One of the more interesting elements of Flotato is its icon work. Once you type in the web app you want to use (Twitter, Facebook, Instagram, etc.), the app icon will change automatically based on what you’re running. So you’ll see the Twitter icon show up, or Facebook’s logo. Oftentimes it will load up a high-resolution favicon. It even has support for badges for unread messages.

On top of that, the icons can also be used to see a live cutout of an app you’re using. In one example, if you’re following Bitcoin progress you can actually use that as your web app’s icon, allowing you to track the changing number in real-time without actually having to keep the app open right in front of you.

Metaphorically, Flotato uses the Mac’s native WebKit engine, so, in theory, it should be much less onerous on your processor and RAM than Electron apps or, in some cases, Chrome tabs. There are a few extra software tricks on top of just using the OS’s rendering engine, but it’s still much lighter than Electron. Flotato’s developer Morten Just tells me that it’s faster because there are ‘no plugins, no bundled browser renderer, no javascript bridges, no bookmark background syncing, just a Webkit 2 webview with out-of-the-way customizations.’

Flotato has an interesting pay structure, too. If you use only a few apps, it’s free to use. However, there is a $14.99 option that will allow you to create an unlimited number of apps if you feel like you might need that.

It certainly sounds like an interesting idea. One worth checking out if you use a lot of tabs on a regular basis.