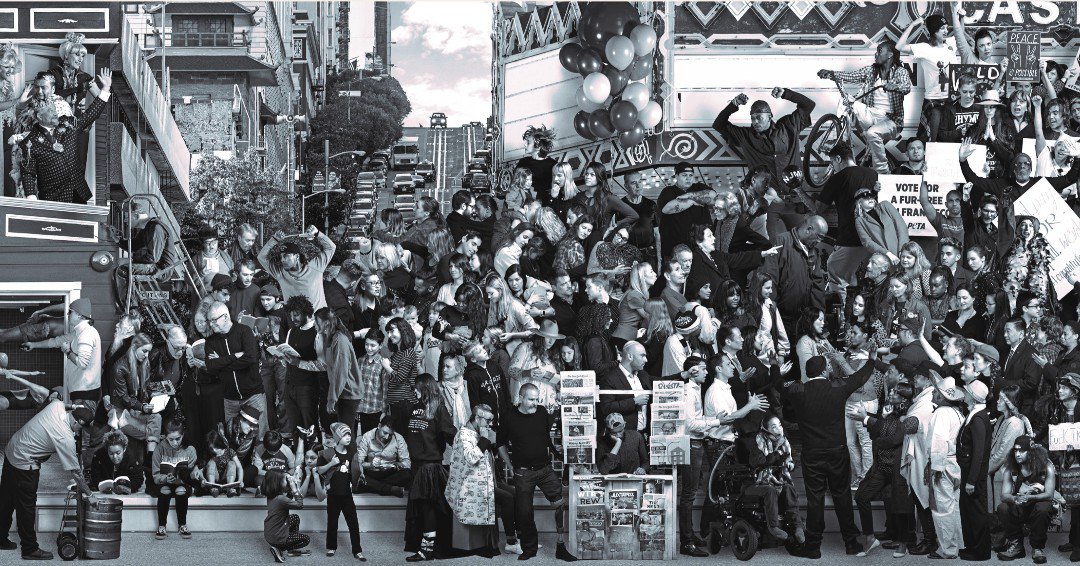 A new video mural that debuted Thursday night at the San Francisco Museum of Modern Art features pretty awesome integration with an accompanying iPhone app that makes it easy to learn about everyone’s story in the mural by using their phone camera.

Titled “Chronicles of San Francisco” and created “by my good friend” JR, as Cook put it, the creation was inspired by the murals that Diego Rivera used to paint in the Bay Area in the 1930’s and 40’s. “This is a must see,” exclaimed Cook.

“Everyone has a story and JR brings them to life,” reads Cook’s tweet. The massive video mural documents the strife of people living in San Francisco and the dichotomy between them and all the wealth in San Francisco, according to ABC 7 News.

JR approached his subjects randomly on the street, filming and interviewing 1,200 people.

It’s like a giant puzzle, where everyone has to go at the place where they decided, and then I composed the mural around them. If you look here, there’s a baby being born! Right now, as we’re talking. You see.

The interactive exhibit invites visitors to download a free iPhone app to learn about everyone’s story in the animated mural.

This is a must see—The Chronicles of San Francisco mural is a moving masterpiece by my good friend @JRart, adding a new dimension to his work. Everyone has a story and JR brings them to life. Congratulations, JR! @SFMOMA pic.twitter.com/fztBOWW8Bw

Or, do it the old-fashioned and use the museum’s interactive kiosk to hear audio and read detailed information. 9to5Mac notes you can also buy the book version of “The Chronicles of San Francisco” on Amazon and use the iPhone app to dive deeper into the images.

What do you think about this interactive animated mural? It’s quite something, isn’t it?