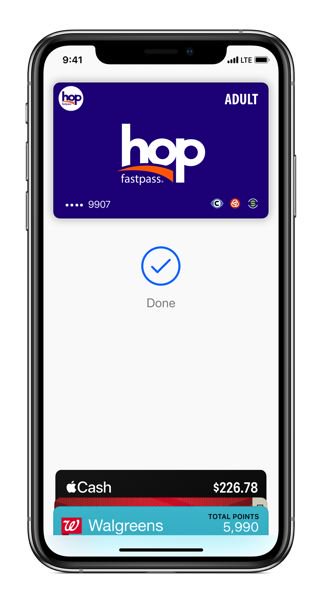 Apple would very much like its digital Wallet app to a one-stop-shop for a variety of different use cases, not just buying things. That includes being able to use the Wallet app to quickly hop on a public transit ride. And for folks in the Portland, Oregon and Vancouver, Washington areas, that is now a reality.

The Portland Tribune is reporting that transit riders in the Portland and Vancouver areas can now use the Hop Fastpass within the Apple Wallet app. That means customers can use the digital version of their public transit card on the Portland Streetcar, TriMet, and C-Tran where these public transit options run.

For transit riders that add the Hop Fastpass to the Wallet app, this will allow them to use their phone or the Apple Watch to quickly hop onto a ride. Riders won’t have to show the physical Hop Fastpass card any longer, which should speed up the process a bit.

TriMet has long been a leader in the transit industry, focused on the customer experience and ways to simplify riding transit. Now with the Hop card in Apple Wallet, our riders and our region take a major leap forward in transit fare payment,” said TriMet General Manager Doug Kelsey.

A similar version to this is already available in international markets. And Apple Pay is heading to public transit in other markets in the United States, too, including the MTA in New York City, and for public transit riders in Chicago, Illinois, as well. Those services should go live later this year, but no specific launch dates are known at this point.

If you are in the Portland-Vancouver area, you’ll just need to download the Hop Fastpass app for your iPhone. It’s a free download. Once you have that done, select the “Add a Hop card” and follow the on-screen instructions along the way. Once the purchase is complete you can then add the card to the Wallet app.

The current TriMet system of doing things will be phased out entirely by the end of 2020, so the public transit system is going all-in with this current option.

And for the folks who don’t necessarily ride public transit all the time, or who might just be visiting Portland or Vancouver? You’re covered:

Residents who only occasionally ride public transportation or visitors who may only be in Portland for a few days can use Apple Pay Express Transit with a credit or debit card as an alternative option to Hop Fastpass.

To use the new service with the Wallet app, you’ll need to make sure your iPhone is upgraded to iOS 12.3. If you have an Apple Watch that will need to be on watchOS 5.2.1 or later.

How often do you find yourself paying for things with Apple Pay on a regular basis? Are you looking forward to public transit becoming a solid feature set for the Wallet app moving forward?