Apple’s magazine and newspaper subscription service has been meet with criticism following its March debut. Despite providing an all-you-can-eat access to more than 300 digital publications for just ten bucks per month, people scoffed at its sloppy user interface and visual inconsistencies. Apple has fixed some of those pain points with iOS 12.3 and macOS 10.14.5, issuing a press release today to tell the world about the fixes like a much-needed Follow button.

Following a publication is now possible from the Apple News+ catalog browsing view.

This feature was mentioned in the release notes for iOS 12.3 and macOS 10.14.5, released May 13, but Apple made a mistake by not advertising it prominently with a splash screen. Now when you browse the catalog of digital newspapers and magazines available with your subscription, you can hit the blue Follow button in the cover’s top-right corner.

Open the News app, select News+ from the sidebar, then choose Browse the Catalog at the top of the screen to browse the list of Apple News+ titles. When you want to receive new issues from a specific title, simply tap the Follow button in the lower-right corner of the cover.

This is far, far easier than the old way following a title which required finding a magazine, opening an issue, tapping the magazine logo in the navigation bar to select the heart icon, with no indication whatsoever that hearting a title would actually follow it.

More publishers are now using live covers, something we initially saw with the digital edition of the National Geographic magazine. This is a great visual treat that serves no practical purpose aside from drawing your attention to the title when browsing the full list. 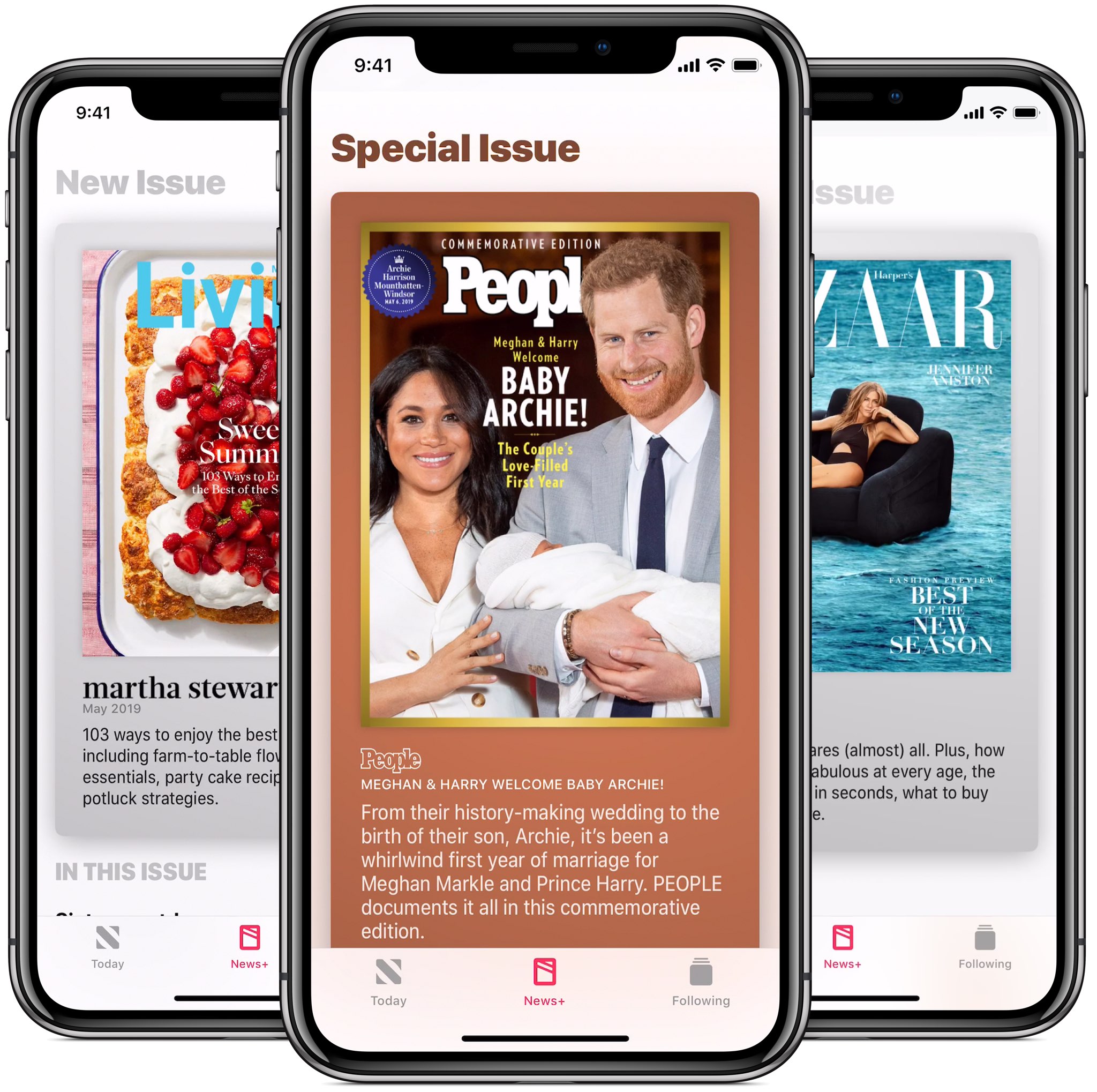 Other publishers are experimenting with special issues, such as the special commemorative edition of the People magazine dedicated to celebrating Royal Baby. Some magazines are even creating customized feature stories for News+ subscribers. 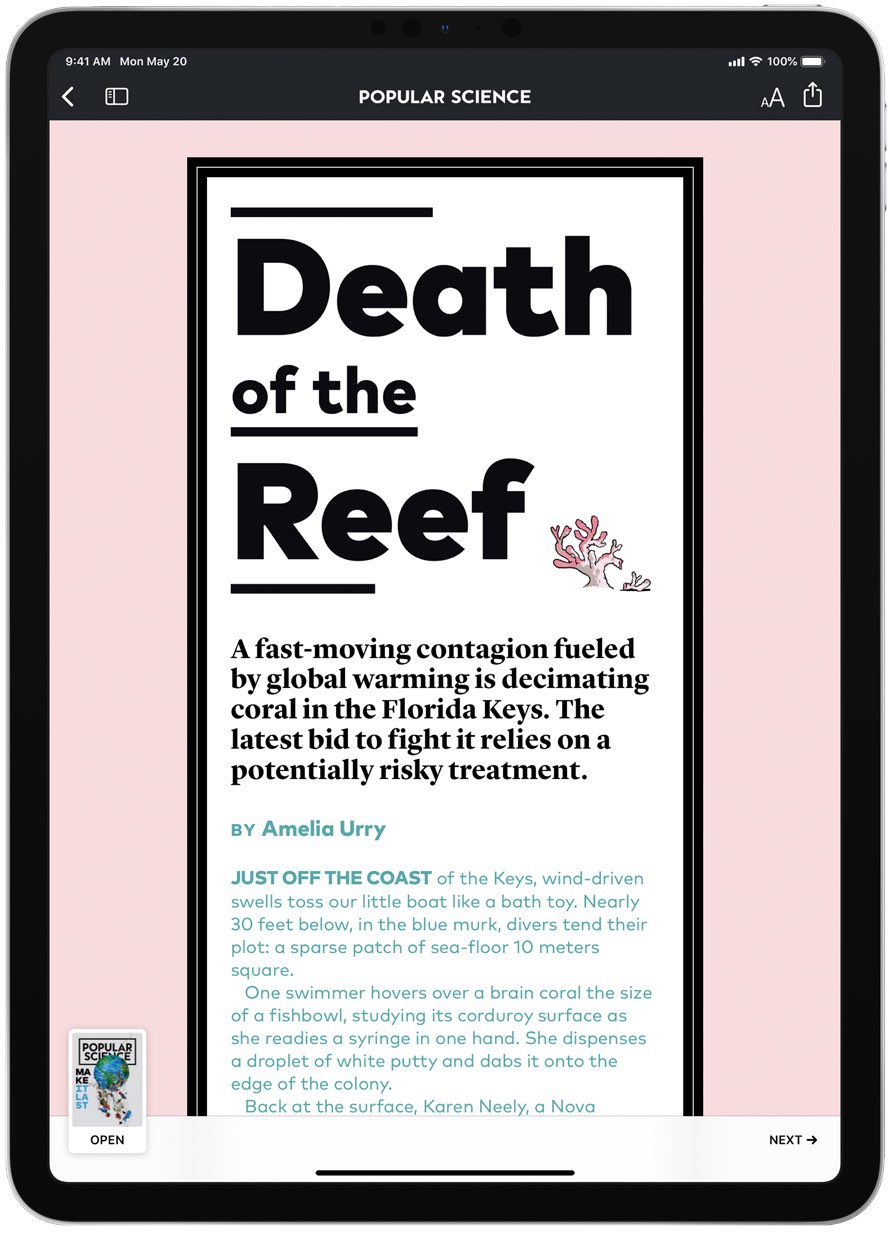 Some of the special features and feature stories include magazine-style issues of The Highlight by Vox, exclusive to Apple News+. There’s also a cool new live cover in Harper’s Bazaar showing Jennifer Aniston come to life. The annual philanthropy issue of Town & Country was able to showcase its four cover stars — Yara Shahidi, Christine Lagarde, Ava DuVernay and Melinda Gates — in “a really unique and powerful way.” 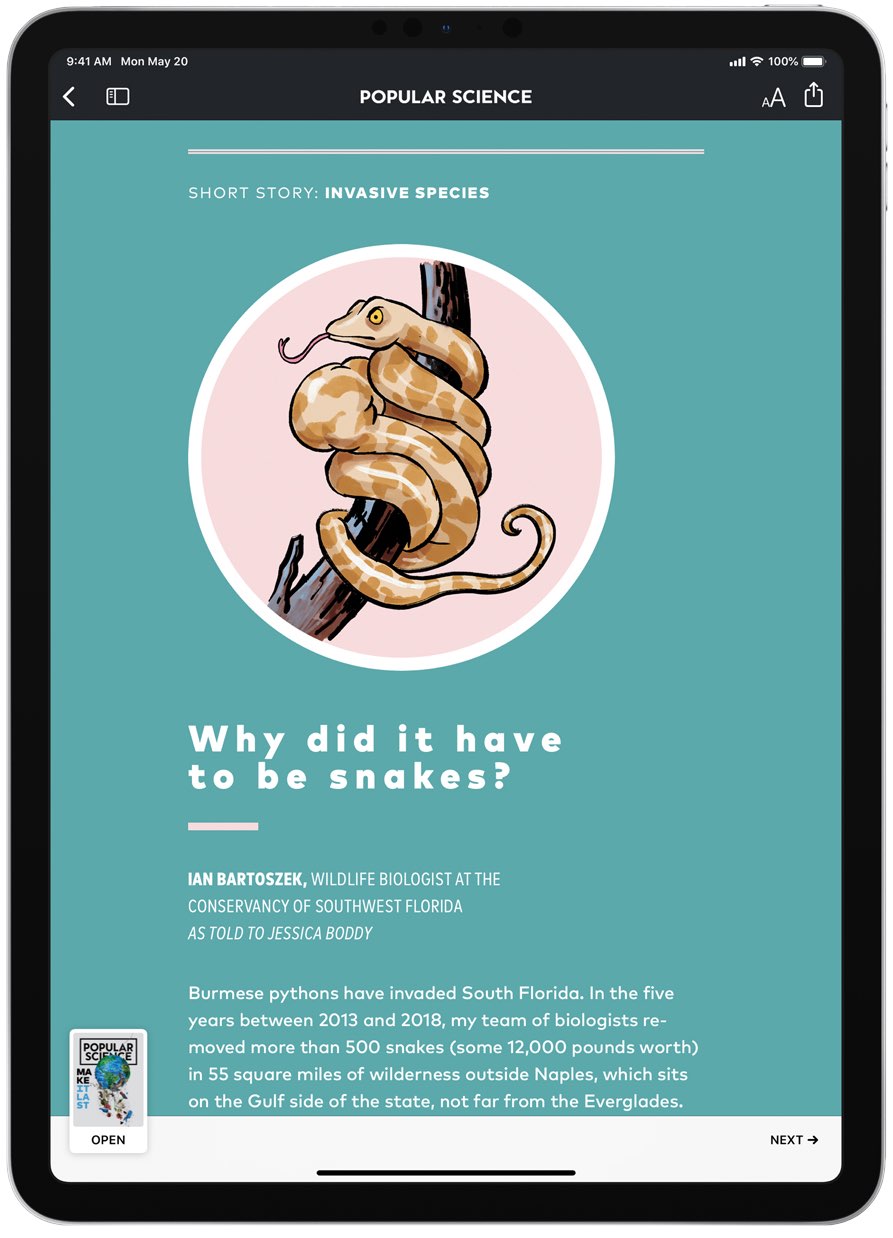 Other magazines are experimenting with multiple live covers, too, including Martha Stewart Living’s annual summer food and entertaining issue that sports four covers. 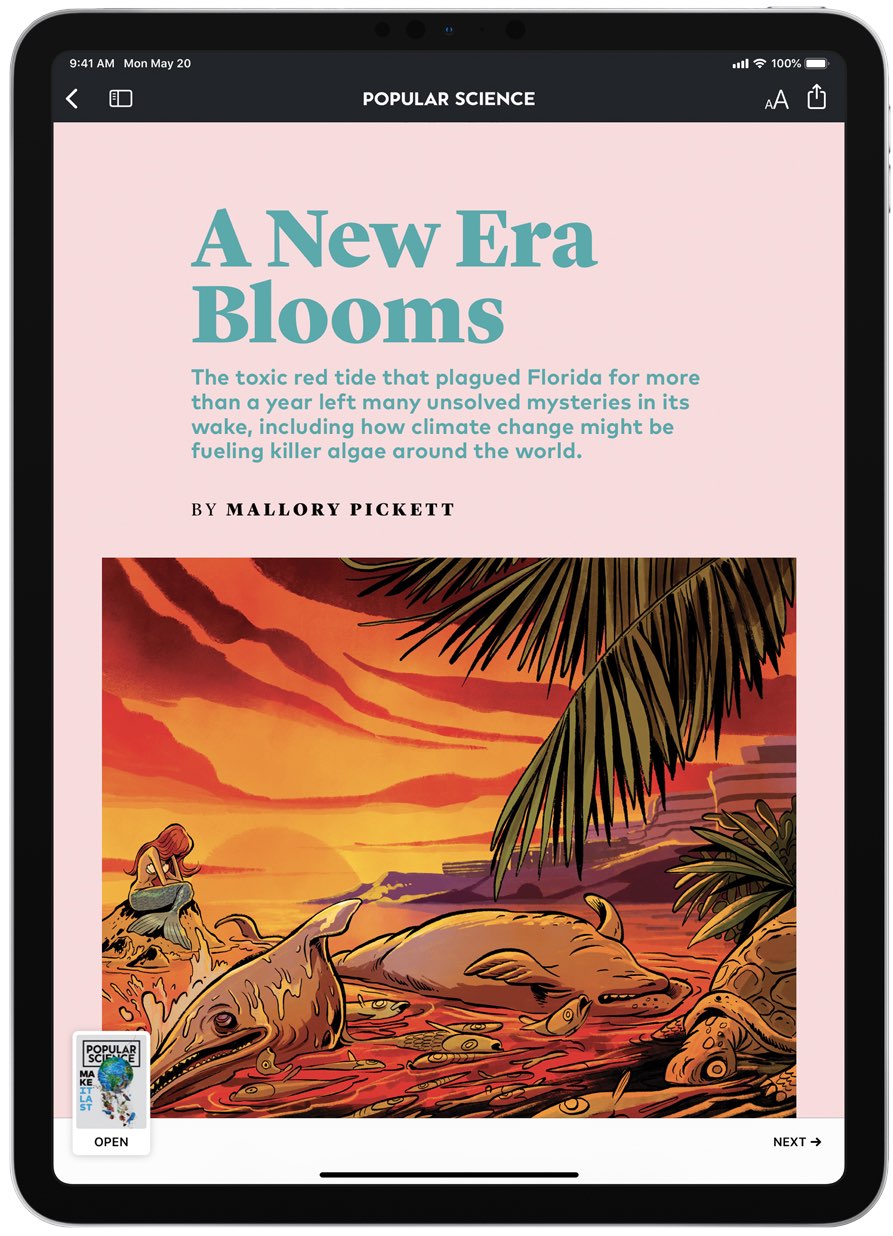 And this from Popular Science:

A tremendous amount of environmental change hits Florida harder and sooner than it does the rest of the nation, which makes the state a bellwether that demands all of our attention. To illustrate that point, we created ‘The Florida Problem,’ a package of six stories that explores how a shifting climate and human development stress the Sunshine State’s natural resources.

While this type of effort is a real design challenge on any platform, we wanted to focus on nailing the digital navigation of six distinct, yet related, stories and shaping one beautiful product.

Eye candy like beautiful layouts, motion covers, multimedia features and interactivity is possible thanks to the native Apple News Format. Apple’s said that hundreds of employees are working on making Apple News+ better and I hope they’ve tasked some of them with persuading smaller publishers to convert their tittles into the Apple News format because some titles in Apple News+ are served as PDFs, leaving a lot to be desired.

We’ve heard a lot of great feedback from the hundreds of publishers available in Apple News+. The latest updates to Apple News+ aim to best showcase their incredible journalism and put the most trusted news sources at readers’ fingertips.

Apple News+ customers are very engaged readers, with most visiting the News app daily. Hundreds of people at Apple, across editorial, engineering, marketing and design teams, are working to make Apple News+ the best experience for people who love reading their favorite titles and discovering new stories.

Even if you’re not subscribed to Apple News+ (I am, because I like smart writing, crisp typography and long-form storytelling in magazines and ten bucks per month is certainly far less than the $37 per month I was paying for my WSJ subscription), you should revisit the service and give it another chance by signing up for a free trial after Apple has fixed teething issues.

Apple News+ is currently available in the US for $10 and in Canada for $13 per month. A free one-month trial is available. Your subscription automatically renews after the trial ends unless manually canceled. The service will launch in the UK and Australia later this year.

One of the easily overlooked features of Apple News+ is support for the Family Sharing feature which makes it easy to share a single subscription with up to six family members.

What are your initial thoughts on Apple News+, assuming you’ve tried it?

Feel free to vent your frustration with the service in the comments below.