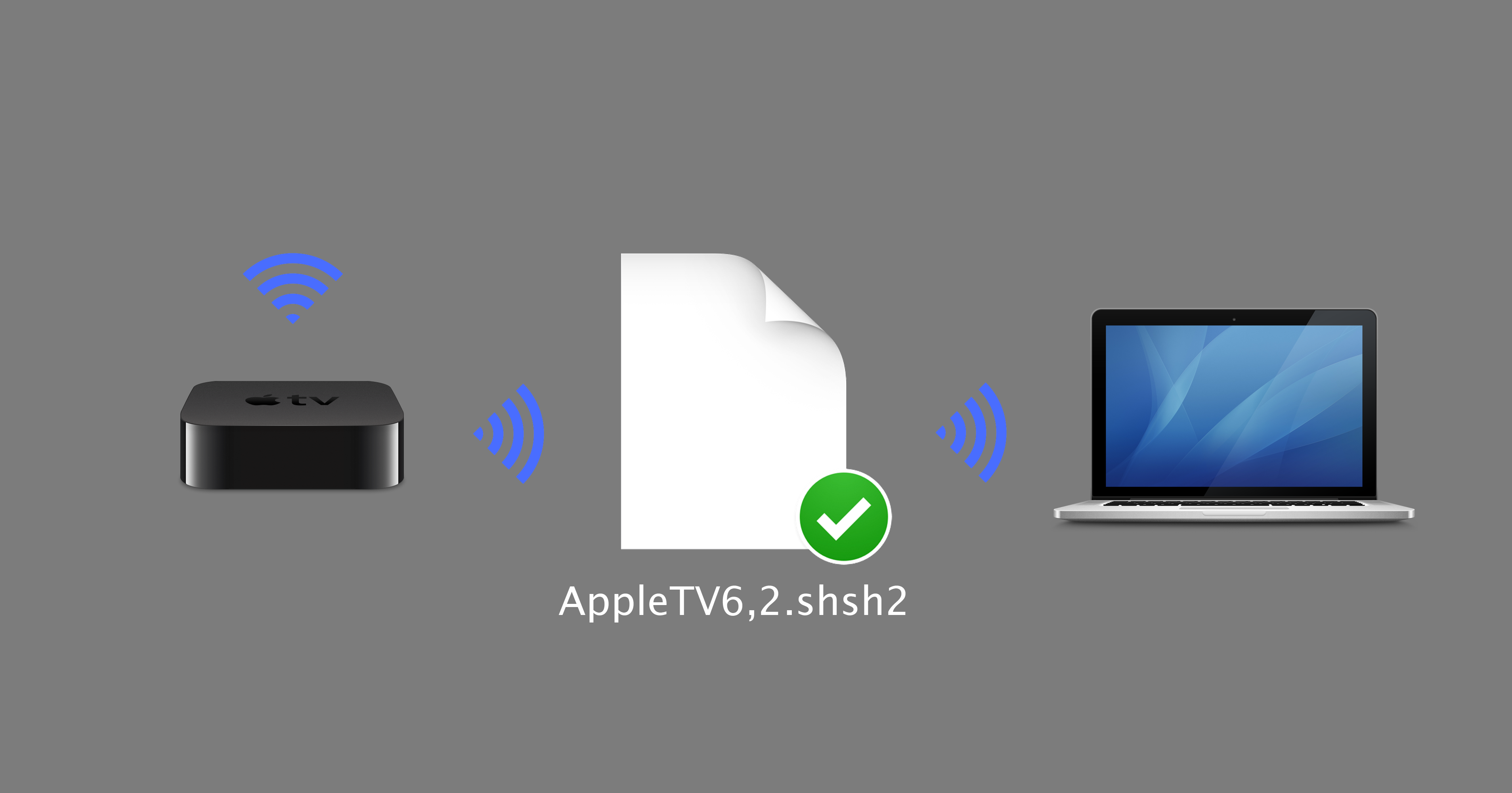 Update: This guide is now outdated, and simpler methods are available. We recommend that Apple TV 4K users now do Step 2) of this guide to find their ECID, and then use our simpler guide on saving blobs with TSS Saver instead. This guide will remain up for advanced users, who may still want to use it to save beta blobs, or incremental blobs which are not saved by TSS Saver.

Although the Apple TV 4K has no port through which to restore or update it, and no available .IPSW files with which to do so, it is still possible to save blobs for it. These OTA (over-the-air) blobs could in theory be used to install unsigned firmwares at some point in the future, should a futurerestore equivalent ever be developed for restoring the Apple TV 4K over the air.

This guide is for our more technical readers, who always save their blobs even when they aren’t of immediate use. There is currently no tool that can restore the Apple TV 4K using these blobs, and there may never be. However, if one is developed in the future, it will be too late to save the blobs then, so you may as well have them safe.

If you want to save blobs for a device other than the Apple TV 4K, we recommend this easier method.

How to save OTA blobs for the Apple TV 4K

1) Download the latest version of tsschecker, unzip it, and place it in a folder called ATV 4K Blobs. 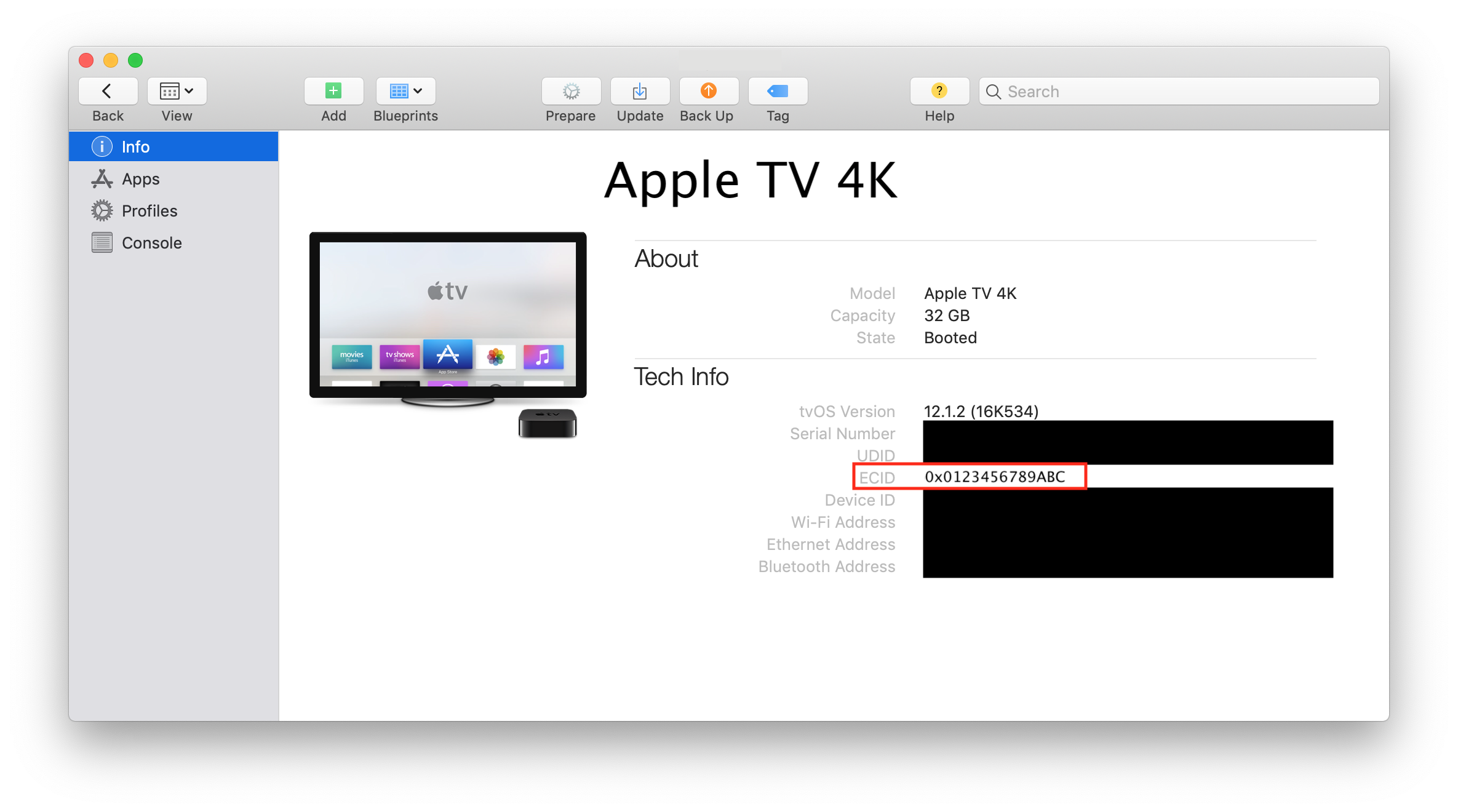 You’ll need to have paired your Apple TV 4K with your Mac to view it in Apple Configurator.

3) Copy your ECID somewhere safe, removing the two characters from the beginning of it:

5) Next, enter the following command at the Terminal prompt, replacing the blank sections with your own information:

Here is an example command, which would save blobs for tvOS 12.4 for an Apple TV 4K with the ECID 0x0123456789ABC. Do not try to use this command unedited, you must use your own ECID and tvOS version:

6) The blobs for your chosen tvOS version should now download into the ATV 4K Blobs folder. Let the process finish in Terminal, as there may be multiple blobs for each firmware version (it saves blobs for any signed beta versions too).

Try running the Terminal command again, but with --nocache added to the end. If it still doesn’t work, download the ota.json file manually from this link, then paste it into your Mac’s /tmp folder, replacing any older version. Once it is there, run the Terminal command one more time, without the --nocache flag. 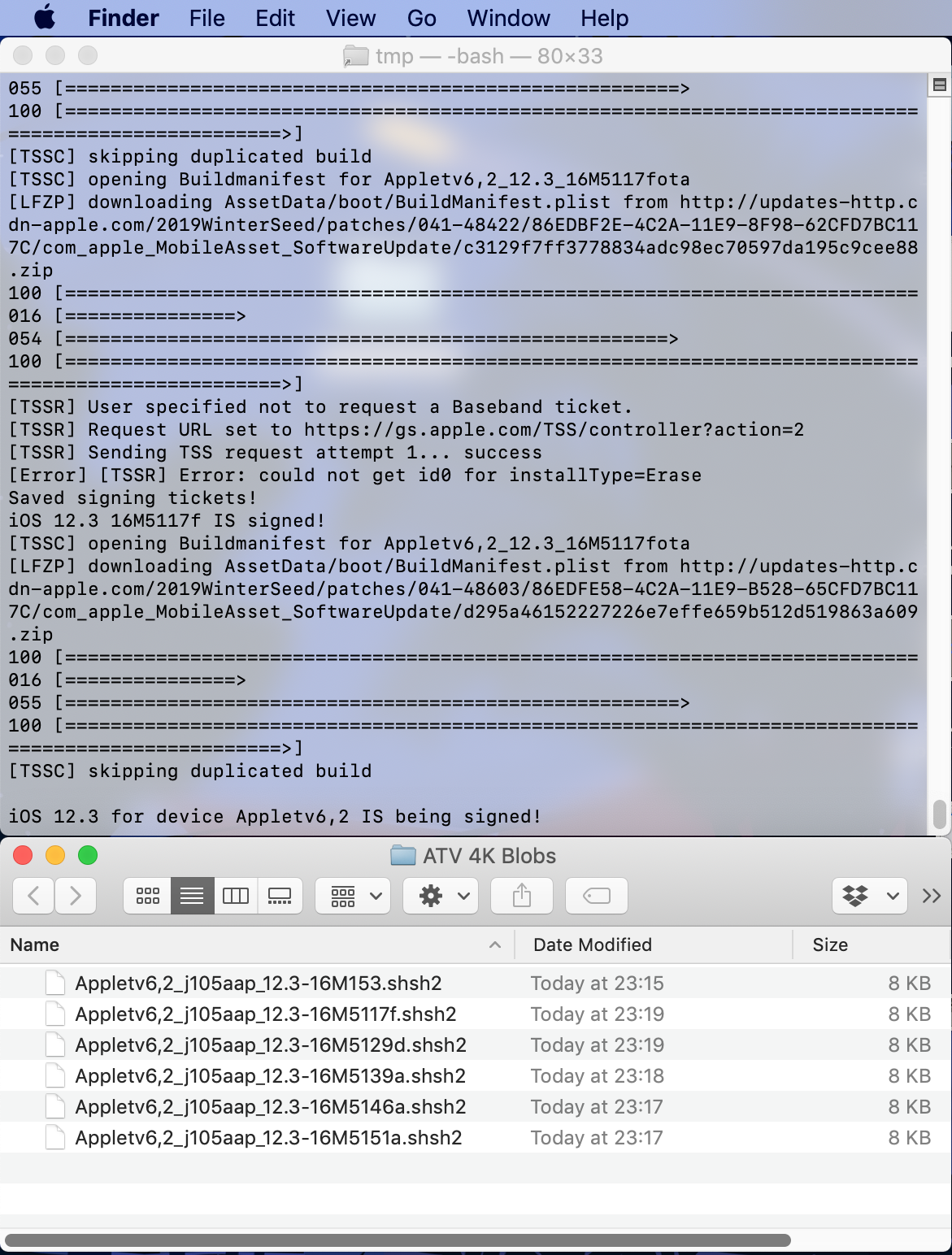 That’s all there is to it! Keep your saved blobs somewhere safe, and remember to come back periodically to run the command again. Each time a new tvOS version comes out you’ll need to issue the command anew, to save blobs for the new firmware. With luck, one day a tool will come out for futurerestoring the Apple TV 4K over the air, and then your blobs will allow you to restore to an unsigned and jailbreakable firmware.

Save blobs for your other Apple devices too! Use our simpler guide for non-ATV 4K devices.

Let me know if you’re having difficulties with the guide and I’ll try to help you out. Whilst this method won’t be of use to all users due to its niche target and the current inutility of ATV 4K blobs, hardcore jailbreakers may wish to have them saved so they’re not caught out by any future tool.