Hacker and unc0ver lead developer Pwn20wnd officially released unc0ver v2.1.1 to the public Sunday afternoon. Unlike the revision that we reported about yesterday, this release is not a public beta.

Pwn20wnd announced unc0ver v2.1.1’s release via Twitter, linking to the official GitHub page that cites all the recent changes in this particular version: 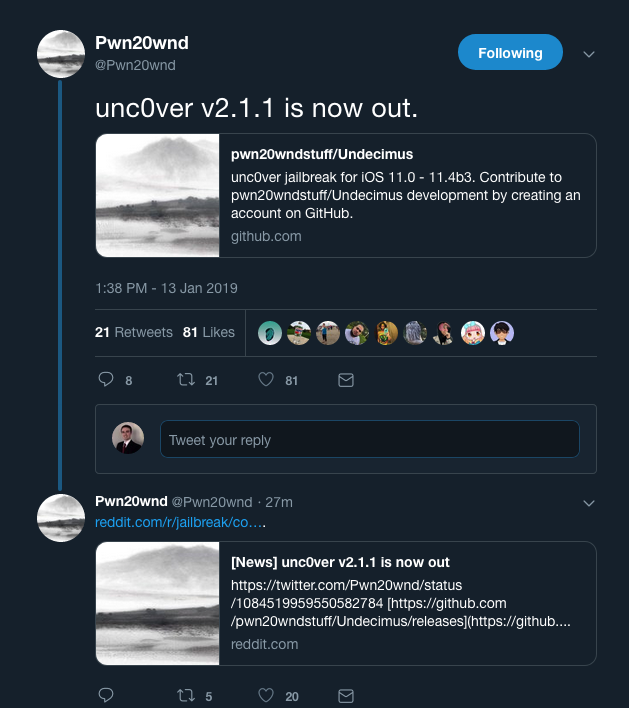 As it would seem, there were at least two more revisions to the public beta since yesterday leading up to the official release, and those revisions brought the changes listed below:

Given all the updates and optimizations that have been baked into unc0ver in v2.1.1, this update is easily recommended for all users. Not only should it bring new efficiencies to the jailbreaking process, but it should also resolve some unwanted bugs and make the experience more stable overall.

Just as with previous versions of the unc0ver jailbreak tool, version 2.1.1 is available for download from Pwn20wnd’s official GitHub repository.

Unc0ver is a semi-tethered jailbreak just like Electra, which means you must re-run the tool after every reboot. That aside, it bundles an iOS 11-optimized build of Cydia that sports the official seal of approval from Saurik himself.

Have you downloaded and used the unc0ver v2.1.1 jailbreak tool yet? Let us know how it went for you in the comments section below.