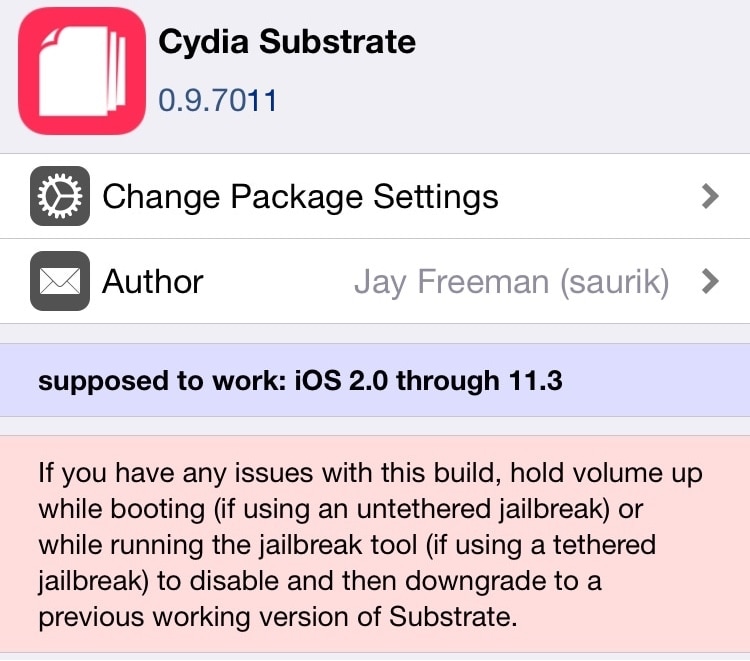 Saurik (Jay Freeman) launched an official iOS 11-centric update for Cydia Substrate less than two weeks ago, but it wasn’t long after installing it that some jailbreakers started reporting arbitrary freezes and problems with specific jailbreak tweaks. Flustered jailbreakers took to a support page on GitHub, where Saurik said that he successfully reproduced the bug and was looking into a fix.

If you were one of many affected by these bugs, then you’ll be excited to learn that Saurik pushed two consecutive updates to Cydia Substrate – the first (version 0.9.7010 came late Friday night, while the second (version 0.9.7011) came early Saturday morning. Naturally, the latter encompasses the latest fixes.

A follow-up comment by Saurik in the same GitHub support thread describes the changes in these updates:

I have pushed 0.9.7011 with an attempt to prevent Substrate from being killed by Jetsam.

(FWIW, I realize that a lot of people are saying they have experienced a “respring loop”—as in, SpringBoard starting over and over again, but crashing each time—but not a single person has provided evidence of this: all I’ve seen is evidence of is a single attempt to restart all daemons getting “stuck”; I have managed to replicate this behavior, and it is due to a window of opportunity where Substrate being killed while waiting for a mach port to recycle leads to the process it is hooking not starting.)

Given how the latest version of Cydia Substrate fixes a widespread bug that many were experiencing, it’s recommended that all users download this update from Cydia as soon as possible. If you’re already using Cydia Substrate, then you can refresh your sources in Cydia to see the update; otherwise, you’ll need to add the following repository to Cydia to download it:

Those using the unc0ver jailbreak must be running version 2.0.0 or later to use the iOS 11-centric Cydia Substrate. Citing the Electra Team, Electra users can also replace Substitute with Cydia Substrate using the “Substrate Downloader” package; however, this concoction requires having the latest version of “dpkg” installed:

Are you happy to see how quickly Saurik responded to the bug reports in the latest version of Cydia Substrate? We know we are. Share your thoughts in the comments section below.